The opening sections of a historic agreement 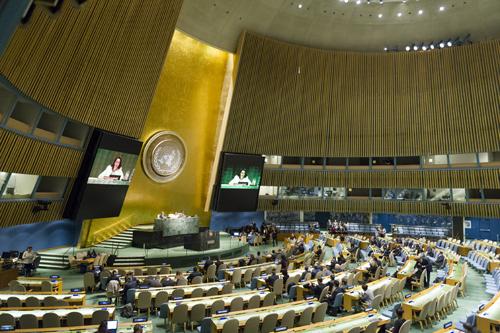 “The States Parties to this Treaty,

Determined to contribute to the realization of the purposes and principles of the Charter of the United Nations,

Deeply concerned about the catastrophic humanitarian consequences that would result from any use of nuclear weapons, and recognizing the consequent need to completely eliminate such weapons, which remains the only way to guarantee that nuclear weapons are never used again under any circumstances,

Mindful of the risks posed by the continued existence of nuclear weapons, including from any nuclear-weapon detonation by accident, miscalculation or design, and emphasizing that these risks concern the security of all humanity, and that all States share the responsibility to prevent any use of nuclear weapons,

Cognizant that the catastrophic consequences of nuclear weapons cannot be adequately addressed, transcend national borders, pose grave implications for human survival, the environment, socioeconomic development, the global economy, food security and the health of current and future generations, and have a disproportionate impact on women and girls, including as a result of ionizing radiation,

Acknowledging the ethical imperatives for nuclear disarmament and the urgency of achieving and maintaining a nuclear-weapon-free world, which is a global public good of the highest order, serving both national and collective security interests,

Recognizing the disproportionate impact of nuclear-weapon activities on indigenous peoples,

Basing themselves on the principles and rules of international humanitarian law, in particular the principle that the right of parties to an armed conflict to choose methods or means of warfare is not unlimited, the rule of distinction, the prohibition against indiscriminate attacks, the rules on proportionality and precautions in attack, the prohibition on the use of weapons of a nature to cause superfluous injury or unnecessary suffering, and the rules for the protection of the natural environment,

Reaffirming that any use of nuclear weapons would also be abhorrent to the principles of humanity and the dictates of public conscience,

Recalling that, in accordance with the Charter of the United Nations, States must refrain in their international relations from the threat or use of force against the territorial integrity or political independence of any State, or in any other manner inconsistent with the Purposes of the United Nations, and that the establishment and maintenance of international peace and security are to be promoted with the least diversion for armaments of the world’s human and economic resources,

Recalling also the first resolution of the General Assembly of the United Nations, adopted on 24 January 1946, and subsequent resolutions which call for the elimination of nuclear weapons,

Concerned by the slow pace of nuclear disarmament, the continued reliance on nuclear weapons in military and security concepts, doctrines and policies, and the waste of economic and human resources on programmes for the production, maintenance and modernization of nuclear weapons,

Determined to act with a view to achieving effective progress towards general and complete disarmament under strict and effective international control,

Reaffirming that there exists an obligation to pursue in good faith and bring to a conclusion negotiations leading to nuclear disarmament in all its aspects under strict and effective international control,

Reaffirming also that the full and effective implementation of the Treaty on the Non-Proliferation of Nuclear Weapons, which serves as the cornerstone of the nuclear disarmament and non-proliferation regime, has a vital role to play in promoting international peace and security,

Recognizing the vital importance of the Comprehensive Nuclear-Test-Ban Treaty and its verification regime as a core element of the nuclear disarmament and non-proliferation regime,

Reaffirming the conviction that the establishment of the internationally recognized nuclear-weapon-free zones on the basis of arrangements freely arrived at among the States of the region concerned enhances global and regional peace and security, strengthens the nuclear non-proliferation regime and contributes towards realizing the objective of nuclear disarmament,

Emphasizing that nothing in this Treaty shall be interpreted as affecting the inalienable right of its States Parties to develop research, production and use of nuclear energy for peaceful purposes without discrimination,

Recognizing also the importance of peace and disarmament education in all its aspects and of raising awareness of the risks and consequences of nuclear weapons for current and future generations, and committed to the dissemination of the principles and norms of this Treaty,

Stressing the role of public conscience in the furthering of the principles of humanity as evidenced by the call for the total elimination of nuclear weapons, and recognizing the efforts to that end undertaken by the United Nations, the International Red Cross and Red Crescent Movement, other international and regional organizations, non-governmental organizations, religious leaders, parliamentarians, academics and the hibakusha,

Have agreed as follows:

1. Each State Party undertakes never under any circumstances to:

To see the other 19 articles of the Treaty on the Prohibition of Nuclear Weapons, go to: www.un.org/disarmament/ptnw