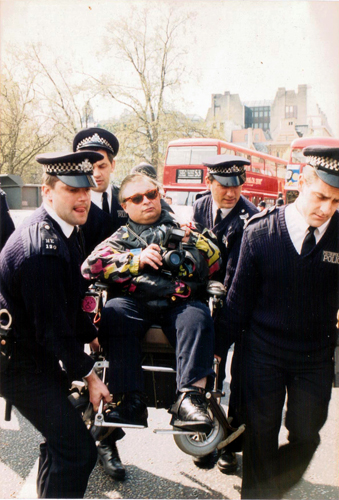 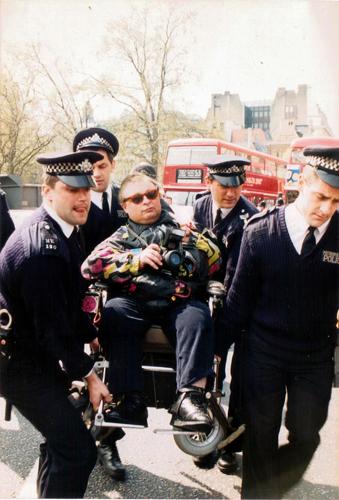 A baking summer day in the early 1960s. I’m in my pushchair, trundling along the road to Aldermaston with my CNDing parents, and somewhere on the fringe of my toddler’s consciousness, there’s a Cheshire cat smile, floating in the heat haze. Around it a face materialises: white as a sheet, little full-moon tortoiseshell glasses from the National Health, always the smile, sometimes a smirk, sometimes a sardonic grin.

Keith Francis Whitfield Armstrong, born in Cape Town, South Africa, hobbling along with one shoulder higher than the other, always fighting the cause, always finding a secret source of amusement in the battles he fought.

Keith’s life was forever changed when he contracted polio at six months. At the age of 20, he spent an entire year in hospital, undergoing complex back surgery. He spent a lifetime clambering in and out of his wheelchair, never complaining, making the best of a bad deal.

I next recall him squinting over paste-up sheets, fastidiously applying Letraset to the headlines. As a 16-year-old ‘special needs’ schoolboy, he’d launched his own poetry magazine, The Informer, which he co-edited with my father, David Gill. Now both have died, within a week of each other, dad at 82, Keith at just 67, all in the ‘merry’ month of May.

But half a century ago, Keith sparkled with energy and enthusiasm. He would audaciously ring up famous poets and shanghai them into writing for him, a budding impresario. His own work was in that sweet zone between poetry and art – concrete poetry, typewriter art – critical theory leavened by sparks of humour.

At 22, he left the comfort of home in Oxford and his devoted mother, to whom he sent Christmas cards littered with kisses, and tried to make a career in London. (Keith’s father, who fought in the navy during the Second World War, died before Keith was born.) It was a wobbly start: he spent time roughing it on the streets, and precariously living in a succession of communal squats. Squatters’ rights were a lifelong obsession, broadening later into a general determination to secure adequate housing for all.

“‘Disability pride’ was not just a slogan, but a principle he lived out every day.”

At last, he acquired a council flat in Euston, which became a beacon of progressive debate, blinking in the dirty twilight of NW1. Hundreds of activists passed through Keith’s smoky, book-crammed flat, many of them putting in stints as carers for Keith – a job that served as a dramatic introduction to disability politics.

Keith refused to be humble with his helpers, and could be a stern taskmaster – but everyone who worked for Keith gained political awareness. He was invariably kind and generous to people in trouble, especially fellow people with disabilities, and many a passing stranger was kept off the streets thanks to a few nights or a year taken under Keith’s wing.

Thus his personal life became entwined with his activism. For him, ‘disability pride’ was not just a slogan, but a principle he lived out every day.

Keith turned his disability into a career. Slightly softening his instinctive dislike of authority, he managed to land a series of jobs advising local authorities – Ealing and Camden especially – on how to make public transportation and buildings more accessible for people with disabilities.

I’ve heard it said that Keith’s article in the special issue of Peace News that he edited in December 1976 (PN 2033) helped popularise the expression ‘people with disabilities’ as a replacement for ‘disabled people’, or worse still, ‘the disabled’.

This was no mere obsession with political correctness – rather, Keith had taken to heart Chomsky’s perception that words influence thought as well as vice versa. Keith disliked later euphemisms such as ‘challenged’ or ‘differently abled’ – they were emollients, glossing over the harsh facts of life for people unable to live without human and technical assistance. He simply wanted to make the point that a disability is merely part of a person’s life, not the single characteristic that defines him or her.

Again, Keith demonstrated the truth of that in his personal life. Best known as a staunch campaigner for access to buildings and transportation, he became an influential voice for change in disability policy in many parts of London. But he was also an accomplished concrete poet, included in all the best anthologies; a musician, mainly on keyboards and harmonica; a record producer, whose label, Old Knew Wave Records, briefly illuminated the London music scene in the late 1970s; an avant-garde photographer with an eye for telling images and warm colours; and a serious scholar, who published papers on the history of wheelchairs and tricycles, ancient Roman history with special reference to the treatment of ‘cripples’ and the life of the emperor Claudius, who fascinated Keith because of his struggle with disabilities including deafness and a limp.

Luckily Keith conserved his works carefully, and many of them can be downloaded for free at academia.edu, a global website where he is in the top one percent of the most-read scholars. That 1976 Peace News feature is in there. Likewise his music can be heard on SoundCloud (Keith’s handle is ‘ruhuman’) and his art and music is on YouTube – search for ‘Keith Armstrong typewriter art’.

Life was never easy for Keith. He was beaten up several times (once by a psychotic helper wanting to clean away Keith’s diseased presence from the world) and he lived in fear that Camden council might take away his flat, as the political climate changed and Tory cuts began to bite. But through it all, Keith compensated for his physical weakness with extraordinary strength of character.

He never gave up in his many battles over disability rights. We owe it to him and his numerous loyal comrades that most London buses, all London taxis, and most public buildings, are today accessible to wheelchair users. That, along with his fascinating collection of music and artwork, will be the legacy of our feisty fighter and engaging companion, Keith Armstrong.