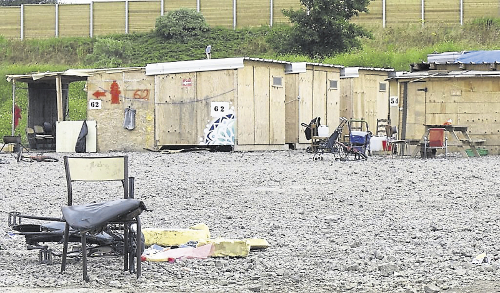 Lotte Reimer: In December, a group of volunteers from Mid-Wales Refugee Action went to work at La Linière refugee camp near Dunkirk, France. Mainly from Machynlleth and the surrounding area, they brought much needed supplies of sleeping bags, blankets and clothes donated by people across mid-Wales. For a week, they volunteered with Kesha Niya, a collaborative project between refugees and volunteers from across the globe that has been working in the refugee camp since it was established in March 2016 by Médecins Sans Frontières (Doctors without Borders, MSF). As well as 1,000 meals a day, the project provides volunteers for the women’s centre, children’s centre, distribution centres and free shops.

Although we were only there for a short time, the project has left a deep imprint in our hearts. The Kesha Niya project core principle is collaboration with refugees. They believe everyone is equal and work alongside those forced to live in the camps, enabling them to take back at least some control over their lives.

The project is non-hierarchical and work is organised through meetings between volunteers and refugees. It seems to flow like clockwork, from morning banana smoothies to dishing up the evening meal from the Kesha Niya food truck.

Kesha Niya also provides volunteers for the women’s centre, a safe space for women living in the camp, and the children’s centre, a beacon of light, with its brightly-painted walls, toys and playground. It also coordinates wood distribution to the shelters and community kitchens.

Still, conditions inside the camp are harsh. Wedged between the motorway and the railway line, 300 wooden shelters are arranged in rows with communal facilities (toilets, kitchens, women’s and children’s centres) scattered between them.

All structures are temporary and un-insulated. Shelters are turning mouldy, with a number of children receiving medication for respiratory problems. It was bitterly cold while we were there and each shelter gets one small bag of wood per night – not enough, but all there is.

Volunteers report increased numbers of refugees arriving at the camp. Authorities have officially closed the camp to more refugees and so people arrive illegally, by night.

Proposals to close the camp down in March 2017 would leave the current population to fend for themselves like those evicted from the Calais ‘Jungle’. Franck Esnee of MSF France says: ‘Where should the refugees and migrants who come to La Linière camp go instead? This policy of systematically destroying existing camps and preventing the construction of new ones will lead nowhere. Individuals, families and even unaccompanied children will be condemned to survive the winter as vagrants, destitute and vulnerable to violence.’

Since the eviction of the Jungle, refugee support groups say one in three children has gone missing.

I saw a family of nine ushered into the shipping container that houses the free shop. They had been travelling for three weeks from Greece: their shoes were broken, they were cold and hungry. The children clutched their mother’s hands, their eyes wide: no one seemed quite sure about where they were or what was happening. Within 30 minutes they had new clothes and shoes, a shelter, blankets, sleeping bags and a hot meal.

Looking at the camp with its derelict buildings, stagnant icy puddles and piles of rubbish, it’s hard to find the positives. But, looking at the woman’s face when a plate of hot and nutritious food was put into her hands, seeing the kids becoming kids again, it’s hard to see this place as anything other than a safe haven for those in need.

Kesha Niya is Kurdish for ‘no problem’. The name was chosen by ‘the Kurdish Brothers’ and a group of international volunteers that run the project. The words ring out through the kitchen all day: there are no cups one day, but it’s ‘no problem’. Someone pleads for more wood to warm their family and, told there is no more, he says, of course, ‘No problem’. 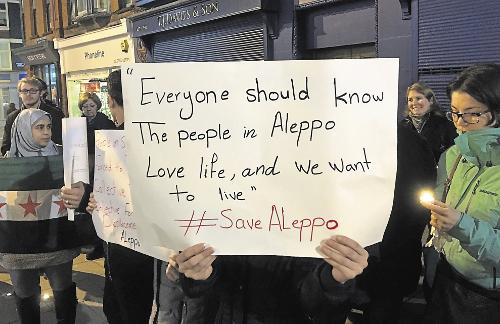 Perhaps escaping war, torture and persecution makes having no wood to warm your family on a freezing night no problem. But there is a problem: the British government.

Unbelievably, Britain will deliberately abandon its moral responsibility to provide safe routes for people seeking refuge in the UK by the legal processes that exist to support that.

What can you do?

It’s hard to look Omar in the eye when he asks me: ‘Why is the British government doing this?’ Omar is a university professor, recently arrived from Mosul in Iraq, where Daesh [Islamic State] took over two years ago, executing, flogging and imposing their version of Sharia law on the people. His life in Iraq suddenly changed with masked men in the streets smashing phones and televisions.

Omar and his family had to get out before they would be killed, like many people he knew. ‘It’s the UK that went to war in Iraq and left it open for Daesh to take over; why aren’t you doing anything?’ I can’t answer him, only drink endless cups of tea with him and listen to his story. ‘What can you do?’ he asks when I leave.

Tears sting my eyes, because I can’t do anything other than this, what I am doing. Which is cook, laugh, cry and work alongside people who are refugees because there is a problem, which is most certainly not them. In the absence of humanity at state level, it’s all that those of us with some personal humanity left can give.’

Mid-Wales Refugee Action is fundraising to buy a much-needed van for the Kesha Niya kitchen:
www.midwalesrefugeeaction.org