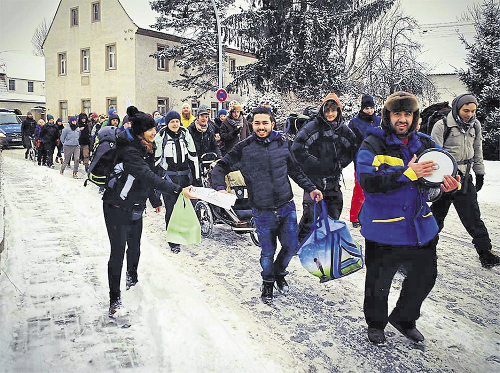 As PN went to press, the Civil March for Aleppo had been walking for 28 days through the European winter in protest against the bombing of civilians in Syria. Having left Berlin, Germany, on 26 December, dozens of marchers had reached Ledec nad Sazavou in the centre of the Czech Republic. The intention is to walk for over three months, for over 2,000 miles, into Syria.

The organisers’ founding statement says: ‘We are going to Aleppo. From Germany to Aleppo, along the so-called “refugee route”, just the opposite direction. We’ve been taught submission to war.... But we refuse to take it anymore. We’ve just withdrawn our consent. We’re ready to deny powerlessness.’

The website also declared: ‘We don’t want to get into politics – we only want the end of bombing against civilians in Aleppo and other towns in Syria and open humanitarian corridors so that help can get to the people in need.’

On the first night of the march, there was a heated discussion around the politics of the march, centred on the issue of flags. The organisers had decided in advance there would be no political symbols, and only white flags. Some Syrians wanted the march to take a clear stand against the Assad dictatorship, and pressed for the right to carry the (green, white and black) revolutionary flag, from 1936.

It seems to have been agreed during this long evening meeting that the revolutionary flag would be allowed, at least for the next day. However, the organisers changed their minds about this before setting off the next morning, for several reasons.

Firstly, they say on Facebook they got the impression that, because of the revolutionary flag, ‘the media covering the march put us immediately to the box of the one side’.

Secondly, they believed that an account in Arabic of the evening’s discussion, produced by some participants, ‘had a political agenda in it’, undermining the organisers’ trust.

Thirdly, the organisers seem to say that the police warned them they could not carry on if the revolutionary flag was carried: ‘The decision had to be taken in few minutes, otherwise the march would have to been stopped by the police waiting for us.’

As a result of the organisers’ refusal to allow the revolutionary flag (which was heard by some as a threat to use the police against people carrying it), several participants withdrew, including some but not all of the Syrians on the walk.

Two of those who withdrew, Julia and Ansar, wrote an account on Facebook which criticised the core organising team (none of them Syrian, apparently) for their ‘colonial’ behaviour: ‘The aspects of colonial behavior when determining for others, what solidarity is or can be, basic steps on how to start an action as a core group and make it a collective one, the importance of listening and the possibilities of different beliefs under one common umbrella.’

The march organisers responded: ‘There are many Syrians who stayed and they did so precisely because we didn’t agree to carrying any other symbols than the white flag. The Syrian community is not one homogeneous body....’