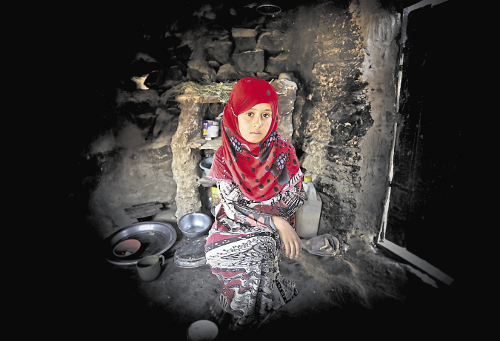 Applying Chomsky’s Propaganda Model to the reporting of Yemen 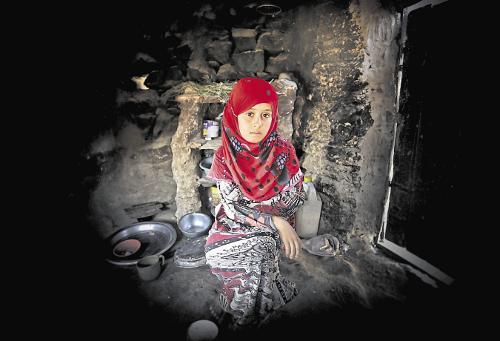 Yemen may be the world’s worst humanitarian crisis, with twice as many ‘food insecure’ people (14 million) as in Syria (seven million). A naval blockade led by Saudi Arabia has been a major factor in creating the ‘humanitarian catastrophe’ (Red Cross spokeswoman Marie Claire Feghali, April 2015) in Yemen, where over 18 million people need humanitarian assistance, compared to 13.5 million in Syria. The critical role of the Saudi blockade in creating these conditions in Yemen has been effectively suppressed by the British media, including Britain’s most liberal mainstream newspaper, the Guardian.

Between 1 June 2016 and mid-January 2017, a period when Yemen was hotly debated in Britain, there were 70 stories or editorials about Yemen on the Guardian website – many of them about Britain’s role in arming or otherwise supporting the Saudi war effort in Yemen.

Most of those 70 items (42 stories, 60 per cent of the total) do not mention the humanitarian crisis – or the role of the Saudi blockade – in any way at all.

The other 28 articles did refer to the humanitarian crisis, but most did so only in a way that effectively suppressed the information.

Edward Herman and Noam Chomsky wrote in 1988, explaining their ‘Propaganda Model’ of the mass media: ‘That the media provide some information about an issue... proves absolutely nothing about the adequacy or accuracy of media coverage. The media do in fact suppress a great deal of information, but even more important is the way they present a particular fact – its placement, tone, and frequency of repetition – and the framework of analysis in which it is placed.’

The Guardian ran outstanding reportage from Yemen by Ghaith Abdul-Ahad on 9 December, but that was a rare exception.

Only seven of the 70 Guardian stories (10 percent of the total) referred to the humanitarian crisis in their titles or their first four paragraphs.

The overwhelming majority either ignored or effectively censored mention of the humanitarian crisis itself.

“This is how to suppress information while reporting it.”

If we turn to the naval blockade, there was only one story in this entire six-month period that referred to the role of the Saudi blockade in its first four paragraphs: ‘Yemen famine feared as starving children fight for lives in hospital’, on 4 October.

Emma Graham-Harrison opened her article: ‘Dozens of emaciated children are fighting for their lives in Yemen’s hospital wards, as fears grow that civil war and a sea blockade that has lasted for months are creating famine conditions in the Arabian peninsula’s poorest country.’ (emphasis added)

She continued (paragraphs five and six): ‘A sea blockade on rebel-held areas enforced by the Saudi-coalition [sic] supporting the president, Abd Rabbuh Mansur Hadi, stops shipments reaching most ports. Its effects can be seen in centres such as the Thawra hospital, where parents cram waiting rooms seeking help for hungry and dying children.’

The role of the Saudi-led blockade had been explained in a Guardian report on 5 June 2015, three months after the Saudis intervened in Yemen in March 2015.

The Guardian noted that the flow of ships into Yemen was down 75 percent, and fuel imports were down over 90 percent. The lack of fuel had stopped water pumps working, cutting off three million Yemenis from a clean water supply, according to Oxfam.

‘The situation is deteriorating, hospitals are now shutting down, without diesel. People are dying of simple diseases. It is becoming almost impossible to survive,’ said Nuha Abdul Jabber, Oxfam’s humanitarian programme manager in the Yemeni capital, Sana’a. That was in June 2015.

The next month, UN agencies declared Yemen a ‘level 3’ humanitarian emergency (the highest level), along with Iraq, Syria and South Sudan. At that point, the UN reported, 13 million Yemenis faced ‘a food security crisis’ and 9.4 million had little or no access to water.

It’s an astonishing fact that not a single Guardian story (in the six months under review) referred to the fact that Yemen is a ‘level 3’ humanitarian crisis.

As Herman and Chomsky say, what matters is placement, tone, frequency of repetition and framework of analysis.

To take another example, on 13 October, Saeed Kamali Dehghan and Spencer Ackerman wrote a news story, ‘US denies seeking wider role in Yemen war a day after firing missiles’.

“There have been few international issues since the 2003 invasion of Iraq that have created such a sense of unease in the UK as the scale of civilian casualties in Yemen.”

Almost at the end of the article, in paragraph 20 of 26, they reported: ‘Since [March 2015], the humanitarian situation in Yemen has steadily deteriorated, with fears growing that the war and a Saudi maritime blockade are creating famine conditions in the Arabian peninsula’s poorest country.’ (emphasis added)

The final para quoted Rafat Al-Akhali, a former Yemeni minister of youth and sports, who pointed out that millions of Yemenis had not been paid their salaries for at least two months: ‘The monthly salary is a small amount but that has been the only means preventing famine. That’s the biggest challenge that everyone is facing.’

There was very important information here.

As there was no hint of this information higher up in the story, most readers would not have received these important pieces of information, or, if they had read to the end, would have gained the impression these were relatively unimportant facts compared to the missiles being fired and so on.

Again: placement, tone, frequency of repetition, and framework of analysis.

In this, Saeed Kamali Dehghan and Spencer Ackerman’s article is typical of the four Guardian stories in this six-month period that do mention the role of the Saudi blockade in Yemen’s humanitarian catastrophe.

I don’t count here Patrick Wintour’s 12 December story, ‘Saudi Arabia row could wreck attempts to end Yemen conflict, MPs told’, which alluded to the problem delicately: ‘Thousands have been killed in the 18-month war in Yemen, and famine has spread across the country, partly due to aid agencies not getting full access to the port of Aden’ (emphasis added).

It seems fair to say that during this six-month period, the Guardian effectively suppressed the fact that a Saudi naval (and air) blockade added to Yemen’s ‘humanitarian catastrophe’.

To be honest, during this period, the Guardian went a long way to effectively suppressing the entire Yemeni humanitarian crisis, with 60 percent of its Yemen pieces not mentioning the humanitarian dimension at all.

For example, on 14 October, at the peak of concern about Syria, an editorial on the laws of war refers to Syria and Yemen, mentioning starvation in Syria but but not in Yemen. There is no reference to the humanitarian crisis in Yemen at all here.

Earlier, on 16 September, Ewen MacAskill, the Guardian’s defence and intelligence correspondent, wrote some perceptive and sceptical commentary on the war in ‘What’s good news for British arms companies is bad news for Yemenis’.

In his 800 words, he did not mention the humanitarian crisis once, despite observing: ‘there have been few international issues since the 2003 invasion of Iraq that have created such a sense of unease in the UK as the scale of civilian casualties in Yemen’.

In a 1,200-word news story the same day (‘One in three Saudi air raids on Yemen hit civilian sites, data shows’), Ewen MacAskill and Paul Torpey could not spare a single word for the humanitarian crisis.

Of the 28 Guardian items that do refer to the humanitarian crisis, 12 of them only mention it in a direct quotation.

On 31 October, Julian Borger, world affairs editor, quoted UN humanitarian coordinator, Stephen O’Brien, as saying Yemen was ‘one step away from famine’: ‘“Eighty per cent of Yemenis, 21.2 million people, are in need of some form of humanitarian assistance,” [O’Brien] said, adding that since the start of the conflict 10,000 children under the age of five had died from preventable diseases due to the absence of basic medical supplies.’

These words come from paragraphs nine and 10 of a 14-para story.

The headline and subhead are: ‘US calls for end to Saudi airstrikes in Yemen – Ambassador tells UN security council meeting it should be clear there is no military solution to conflict’.

The title and subtitle of an article are ways of signalling what is important. Here, the headlines were saying that the humanitarian crisis was not important.

This impression was strengthened by the placement of the first mention of the humanitarian crisis, below the half-way point in the story.

This is how to suppress information while reporting it.

To repeat, of the 70 Guardian stories that we can find on its website for this six-month period, only seven (10 per cent) referred to the growing humanitarian crisis as a significant topic, and 42 (60 per cent) did not refer to it at all.

Only one of the 70 stories in this six-month period made a serious reference to the role of the Saudi-led naval blockade in creating what may be the world’s worst humanitarian crisis.

The effect of all this was to lessen criticism in Britain of the Saudi intervention in Yemen – especially of the Saudi naval blockade, which the Guardian effectively erased from history.

A further impact of this self-censorship was to lessen criticism of British support for Saudi Arabia.

This was important, given Britain’s hotly-debated role in the Saudi war in Yemen. According to the Campaign Against Arms Trade (CAAT), Britain sold £2.8bn worth of arms to Saudi Arabia between April 2015 and March 2016 – the first year of the Saudi bombing campaign in Yemen.

The pattern of reporting we’ve documented here was not the result of a conscious policy of the Guardian as a newspaper, or probably any conscious decision by any individual journalist.

According to the Chomsky-Herman Propaganda Model, in a free market of ideas, those with wealth and power can dominate without violent interventions, shaping a conformist intellectual culture, which leads journalists, academics and others to censor themselves, unconsciously.

Factors creating conformism include media dependence on advertising and state licensing, the need for massive investment to enter the mass media market, and ‘flak’ – the pressure wealthy groups can exert.

Only one story on the Guardian website (between 1 June 2016 and 17 January 2017) records that Yemen was categorised as a top-level humanitarian emergency. This is not a Guardian story; it’s in a ‘wire report’ from a news agency.

A typical wire report from a news agency like Agence France Press (AFP) or Reuters will cover the facts of a breaking story, and give a summary of the story’s background in a nutshell sentence or two.

The summaries in wire reports are quite different from those in Guardian stories in this period.

On 14 October 2016, AFP had a story, ‘Britain to demand Yemen ceasefire at UN security council’, which ended with these powerful sentences:
‘More than 6,700 people – most of them civilians – have been killed in Yemen since the coalition first intervened, according to the UN. Yemen ranks as a level 3 emergency – the highest on the UN humanitarian scale – with nearly 70% of the population of 21 million facing food shortages.’

You can find this wire report on the Guardian website. Also on the site, dated the next day, is a Guardian story based partly on the AFP story (‘Saudi-led coalition admits to bombing Yemen funeral’, 15 October).

This article has this bald summary: ‘More than 6,700 people have been killed in Yemen since the coalition first intervened – nearly two-thirds of them civilians – according to the United Nations.’

No mention of ‘level 3’ or 70 percent of the population facing hunger. That’s gone.

Milan Rai is the author of Chomsky’s Politics (Verso, 1995) and a contributor to The Cambridge Companion to Chomsky (Cambridge University Press, 2005).

The 70 articles discussed are from the ‘Yemen’ section on the Guardian website, discounting opinion pieces (by people like Kate Allen of Amnesty International and David Wearing of Campaign Against Arms Trade), wire reports (from the news agencies AP, Reuters and AFP), and reports in specialist sub-sections of the website (such as ‘Global Development’, sponsored by the Bill & Melinda Gates Foundation).

WWFD? What would Felice do?