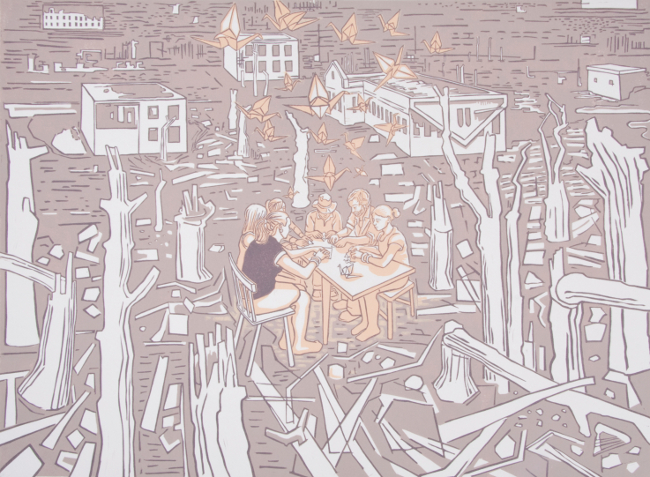 This linocut print shows a table of people gathered to make origami cranes. They are located within a landscape derived from pictures of the area around Hiroshima after the atomic bomb was dropped on 6 August 1945. The cranes relate to the story behind the Children’s Peace Monument in Hiroshima.

The monument shows a Japanese girl called Sadako holding up a crane. Sadako died from leukaemia as a result of radiation from the bomb. While she was in hospital, she set about making 1,000 paper cranes. She believed that if she reached 1,000 her wish to be healed would be granted.

Today, people from all over the world still send in cranes to the Peace Museum in Hiroshima as a symbol of hope for a nuclear-free future.

This print is part of a series that arose out of conversations between Sarah Gittins and Jonathan Baxter when reflecting on their practice as artists involved in the British peace movement. They wanted to make some contemporary images of the peace movement in its different manifestations: vigils, demonstrations, blockades and so on. In particular, Sarah wanted to represent the sense of solidarity and empowerment that she felt when participating in these events, and to say thank you to all the unnamed participants who keep the peace movement alive and gently kicking!

Sarah Gittins works as a printmaker in Dundee.