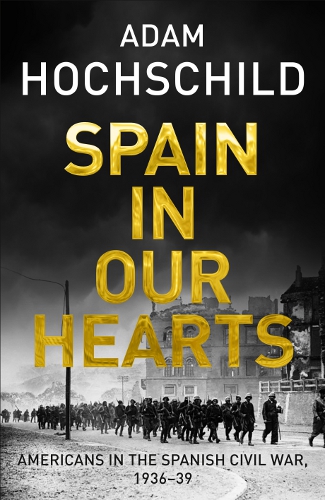 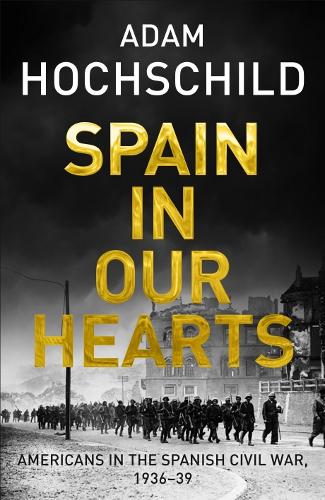 In 1936, not long after Franco launched his fascist coup against Spain’s elected government, the legendary US pacifist Dave Dellinger, then in his early 20s, travelled to the embattled republic as part of a delegation of students.

‘For an agonising 24 hours,’ he later wrote, ‘I wrestled with the urge to pick up the gun in the anti-fascist cause. In the background, as I paced the streets of Madrid were the sounds of the battle, a few miles away. Spanish friends I had come to love and admire were on their way to the front, some of them unarmed but expecting to pick up the guns of their dead comrades and continue the battle.’

According to his biographer, it was ‘the only time in his life that [Dellinger] considered renouncing his pacifism and participating in armed struggle’, and Dellinger himself wrote that ‘it was probably the hardest and most critical decision of my life.’

Adam Hochschild’s powerful new book focuses on those people from the US who travelled to Spain to ‘continue the battle’, as part of the ‘International Brigades’. But it is also, in part, motivated by a desire to explore the same dilemma that Dellinger faced: ‘are there times when military involvement in a distant conflict is justified?’

More than 40,000 men – and an unknown number of women –from 53 countries travelled to Spain to assist ‘the republic’ (as the anti-fascist side was called), including roughly 2,800 Americans. About three-quarters of the latter were members of the Communist Party or its youth league, and close to half were Jewish. (‘For us it wasn’t Franco,’ one New York volunteer explained, ‘it was always Hitler.’)

Of the US volunteers, about 750 would die in Spain, ‘a far higher death rate than the US military suffered in any of its twentieth-century wars.’

Hochschild tells their story by means of a colourful cast of carefully-chosen characters, some famous (Hemingway and Orwell), others hitherto largely unknown. The latter include Dr Edward Barsky, a chain-smoking surgeon from New York City’s Beth Israel Hospital who oversaw hundreds of international medical volunteers; Virginia Cowles, a savvy US journalist and former debutante who used her social connections to report from the fascist side of the lines; and Pat Gurney, an English sculptor and former whaler, who gave up his bohemian life of art, sex and drinking to fight.

In one moving vignette, African-American volunteer Vaughn Love is approached by a group of Spanish peasant women near a village fountain. After rubbing his face ‘to see if the color would come off’, each of the women embraced him.

Hochschild powerfully evokes both the horrors of Spanish fascism (‘But they weren’t atrocities. Oh no señor’, one fascist soldier bragged to a reporter from the Daily Express. ‘Not even the locking up of a captured militia girl in a room with twenty Moors. No, señor. That was fun.’) and the exhilaration of the anarchist ‘social revolution without parallel’ that took place in parts of the republic during the war.

(‘What has the free worker to do with this outworn symbol of bourgeois arrogance? No hats, comrades, on the Ramblas and the future will be yours’, one anarchist newspaper proclaimed – to the annoyance of the the anarchist hatters’ union.)

However, Hochschild also doesn’t shy away from the war’s – and the revolution’s – many complexities.

Thus, while noting that a far larger number of people were murdered in fascist Spain (an estimated 150,000 during the war itself, with at least 20,000 more in executions afterwards), Hochschild also notes that more than 49,000 civilians – including nearly 7,000 clergy – were killed in republican territory by supporters of the republic, the vast majority of them in the first four months of the war.

(In one memorable incident, the anarchist Melchor Rodríguez confronted an angry mob intent on murdering 1,500 right-wing prisoners in the wake of a fascist air raid. ‘Opposed to violence where humans were concerned’, the former bullfighter told the crowd that they would have to kill him first, and they backed down.)

Likewise, Hochschild notes that the revolution was far from universally welcomed, even in its epicentre, Barcelona, with thousands of workers attempting to shirk service in the militias, and large numbers of union members loath to attend meetings or pay dues.

He also highlights the complicity of US corporations in the fascist victory, with Texaco providing a lifeline of oil to the fascists (selling them hundreds of millions – if not billions – of dollars worth of the stuff in today’s money) and DuPont providing the Nazis with at least 40,000 bombs, many of which were dropped on Spain.

Hochschild also chips in on a number of long-standing controversies. Could the Second World War have been prevented by the defeat of fascism in Spain? No, says Hochshild, citing with approval George Orwell’s judgement that the fascists won, not because the revolution was sabotaged from within (by the Communists), but ‘because they were stronger; they had modern arms and the others hadn’t’.

He is similarly sceptical that attempts to encourage and support an anticolonial revolt in Spanish Morocco (a counterfactual possibility considered by Noam Chomsky in his essay ‘Objectivity and Liberal Scholarship’) could have increased the republic’s chances of victory. Far from being ‘a tinderbox awaiting a match to ignite’ it, Morocco ‘was instead a mosaic of highly traditional societies where independence advocates were weak and divided’, and where the fascists ‘had no trouble continuing to recruit Moroccan soldiers’. Indeed, by 1937, one in seven Spanish Moroccan men were in Franco’s forces.

After the defeat of the republic, many of the surviving volunteers continued to live lives that were heavily engaged in struggles for peace and justice.

The chain-smoking Dr Barsky was sentenced to six months’ imprisonment for refusing to give names to the House Un-American Activities Committee, and subsequently organised doctors and nurses to go to Mississippi for the civil rights movement’s ‘Freedom Summer’ in 1964. Others worked with the families of migrant farm labourers in California or travelled to Nicaragua as part of the Central America peace movement in the 1980s. Hilda Roberts, who volunteered as a nurse in Spain, lived long enough to protest against the 2001 invasion of Afghanistan.

The example and commitment of these men and women remain an inspiration for today’s activists. This wonderful, living history is a fitting tribute to them.