‘Until we win!’ – respecting RAFF 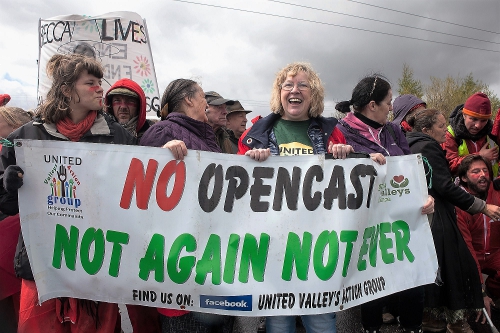 Ever since 2007, I have been writing in Peace News about opencast coalmining in Wales, climate change and local injustice.

My particular target has always been the 11-million-tonne Ffos-y-Frân mine near Merthyr Tydfil. At a rough count, I have written and/or edited 12 articles about Ffos-y-Frân for Peace News over the last nine years. Over the same period of time, I have also campaigned and taken direct action against opencast coalmining in Wales.

Alerted to the travesty of Ffos-y-Frân by George Monbiot’s article ‘The New Coal Age’, I was with a group of polar bears and Rebel Clowns who occupied the mine in 2007 before mining had seriously begun. Our target in 2008 was the British Telecom office in Cardiff. Miller Argent, the consortium pursuing opencast mining at Ffos-y-Frân, was wholly owned by BT’s pension fund.

In 2009, I helped to mobilise for Climate Camp Cymru in Merthyr Tydfil next to Ffos-y-Frân. In 2010, South Wales police thwarted a second camp. Last year a campaign against an adjacent mine at Nant Llesg achieved an at least interim victory. Going against the quisling advice of their own planning officers, Caerphilly councillors rejected Miller Argent’s application to mine at Nant Llesg on the Rhymney side of Merthyr Common.

Throughout this long history, in fact dating right back to 2004, local groups have been on the front line defending south Wales from environmental injustice and the world from climate change. They have been involved in all the actions I have listed and more.

This article is to pay my respects to those people for whom resistance is a daily reality on their doorsteps, people who I am honoured to call my comrades and friends. For them that daily reality is only occasionally the excitement of participating in direct action. Most often it is the bureaucratic nightmare of mounting legal challenges, the rigorous citizen science of monitoring dust and noise levels, and the foot-sore work of going door-to-door with flyers to persuade an historically brow-beaten population that it is possible to struggle and win.

First constituted as ‘Residents Against Ffos-y-Frân’, local people reformed as the ‘United Valleys Action Group’ to campaign against a monstrous waste incinerator. In 2011, they won that one.

At the end of April, RAFF were in action again, working with the Reclaim the Power network to organise a camp and occupy Ffos-y-Frân. The camp was a huge success (see opposite page) and the occupation dominated TV news in Wales for three days straight on the eve of assembly elections.

The action put pressure on political parties to declare their opposition to opencast coalmining and commitment to mitigating climate change. At the camp, Alyson Austin of RAFF led 300 people in the chant, ‘Until we win!’, which became the camp’s motto.

Now that Reclaim the Power have moved on and the mainstream media have left to pursue their louche feeding frenzy elsewhere, RAFF remain in place. On guard. This year they have to deal with Miller Argent’s appeal against the Nant Llesg decision, and to pursue a case against Ffos-y-Fran with the European parliament’s petitions committee. Respect is due. So, let’s all doff our hats to RAFF: ‘Until we win!’

The Wales section of Peace News is edited from Wales by Lotte Reimer and Kelvin Mason. Send news and articles to:
lotte.reimer@gmail.com