Rebecca Solnit, The Encyclopedia of Trouble and Spaciousness 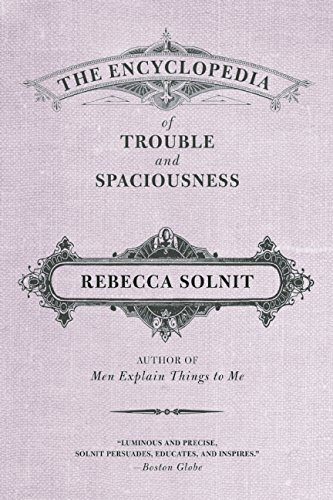 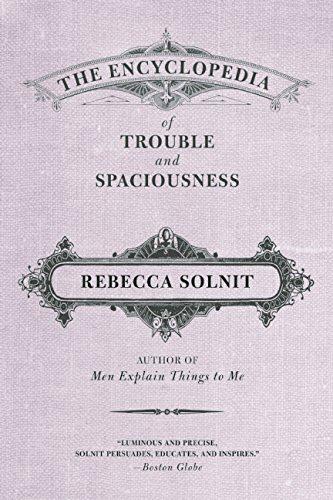 There are some non-fiction writers who are always interesting and informative to read, whatever the topic, but the US writer and journalist Rebecca Solnit is this and something else.

A wonderfully lyrical writer, she is probably best known among activists as the author of the 2004 book Hope in the Dark, her brilliant meditation on why it’s ‘always too soon to go home... always too soon to calculate effect’. And, alongside activism and geography, hope is also a key theme of this book (which, despite its title, is definitely not an encyclopedia).

Which is not to say that Solnit is, in any sense, a Pollyanna. Indeed, some of the best pieces in this collection take a hard look at activist failings past and present.

Thus one essay examines the macabre degeneration of the counter-culture in late 1970s California (‘I am quite willing to break some lawyer’s legs and next break his wife’s legs and threaten to cut their child’s arm off.... That is a very satisfactory, humane way of transmitting information’, the leader of one alternative-community-turned-cult explained), while a second offers a powerful counter-narrative to that sizeable portion of the left (you’ve probably met some of them) whose members are ‘furiously attached to hopelessness, to narratives of despair and decline, to belief in an omniscient them who always wins and a feeble us who always loses’. Such a posture, she notes, is a form of ‘pre-emptive surrender’.

From Otsuchi in Japan to Svalbard in the Arctic Ocean, via Fort Nelson, Tunisia and the Lacandón jungle, the 29 essays in this volume range across the globe, taking in such varied topics as: women’s rights in 10th-century Iceland; the politics of country music; the ‘wild year’ of 2011; the impact of San Francisco’s tech boom on the local population; and the hidden geographies of the US military-industrial complex.

Wherever (and however) she travels, Solnit always has an eye for the telling detail (at a Zapatista gathering, a mural of armed women, bearing the legend ‘celulitis sí, anorexia, no’) and is never less than thought-provoking.

Sometimes, it’s a question of the perfect phrase (the US radical group known as the Weathermen, who bombed banks and government buildings in the ’60s and ’70s, ‘were to real revolution what air guitar is to music’).

Elsewhere she articulates perfectly what one had sensed but never been able to put into words. Thus, she notes how the ‘fine art of doing nothing in particular, also known as thinking, or musing, or introspection, or simply moments of being’ has been drowned out by the new communication technologies, leaving us ‘somewhere in between [solitude and communion], assuaging fears of being alone without risking real connection’.

In my favourite essay (‘On the dirtiness of laundry and the strength of sisters’), she takes on the ‘long parade of people who pretended to care about who did [Henry David] Thoreau’s laundry as a way of not having to care about Thoreau’, revealing how Thoreau’s abolitionist mother and sisters were ‘political powerhouses in whose wake he swam’.

Far from ‘pretending to be a hermit in his cabin on Walden Pond... [Thoreau] was not retreating from anything’ she writes. Rather, ‘He was advancing toward other things.’ In fact, not only did he go to jail for war tax resistance during the time he lived on Walden Pond, but his mother’s and sisters’ organisation, the Concord Female Anti-Slavery Society, actually met at least once in Thoreau’s famous cabin.

Despite the many horrors she touches on, this is, at its heart, an optimistic book, and Solnit’s optimism is infectious.

‘Radicals often speak as though we live in a bleak landscape in which the good has yet to be born’, she writes. ‘Not only is there an alternative, but it’s here and always has been.’