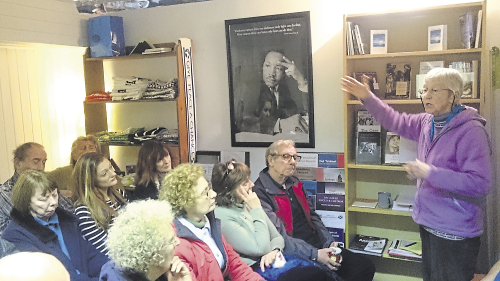 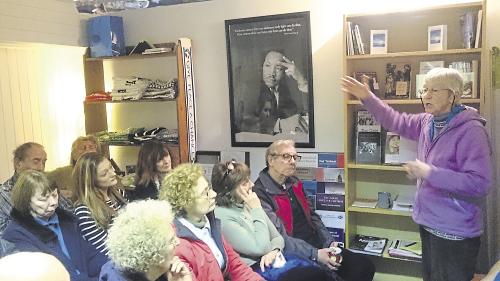 Sister Megan Rice, a US Ploughshares activist, spoke on 8 January at the newly-opened Edinburgh Peace & Justice Centre about being imprisoned for two years for a symbolic act of resistance at the facility where the US is making new nuclear weapons and where the explosive components of the Hiroshima bomb were produced as part of the Manhattan Project.

Megan was 82 years of age at the time of the ‘Transform Now’ Ploughshares action in July 2012. She and Greg Boertje-Obed and Michael Walli crept through Tennessee woodlands at 1am and cut and crawled through three chainlink fences at the Y-12 ‘national security complex’ in Oak Ridge, Tennessee, to reach the highly-enriched uranium facility, where the US stores enough uranium to make 1,000 nuclear weapons. The three poured blood on the building to symbolise the potential slaughter of millions of innocent humans being prepared there, and they hammered on the corner of the building to symbolically begin the transformation of that place from death-dealing to life-giving. They also wrote on the walls: ‘Swords into Plowshares’ and ‘Woe to Empire’.

Their action was in the faith-based Ploughshares tradition inspired by the vision of the prophet Isaiah: ‘They shall beat their swords into ploughshares and learn war no more.’

The ‘Transform Now Ploughshares’ action caused what the New York Times described as ‘The biggest security breach in the history of the [USA’s] atomic complex’, leading to a two-week shut-down for the nuclear weapons plant. This was highly embarrassing to the US government which, perhaps for this reason, pursued a spurious sabotage charge. The three were convicted of sabotage but the sentence was overturned by an appeals court judge who stated that the US government had no grounds for this conviction as there was clearly no attempt to act in any way that threatened the security of the United States. The three were dramatically released in May 2015.

Megan was joined in Edinburgh by Paul Magno of Nonviolence International, who has been involved in Witness for Peace and Witness Against Torture, taking part in prolonged fasts at the supreme court and the White House in response to the ongoing imprisonment and torture at Guantánamo.

The pair stressed that, while their actions were inspired by their Catholic faith, this kind of action is open to anyone who wants to resist nuclear weapons and the empire that relies on them for security. They said the symbolism of pouring human blood and symbolically beginning to disarm the nuclear weapons complex with hammers is very powerful. The action took only minutes and such actions can be done by anyone. It is important, Paul said, not to see Megan as a superstar.

Sister Megan described their action as following a simple model of marking the place where our society is preparing for crimes against humanity and thereby revealing the truth of the terrible injustice embodied there. They asked the gathering whether they considered this form of action to still be worthwhile after 35 years, and urged people to consider taking similar nonviolent, direct, and symbolic action.

Asked about her background, Megan told of her parents’ connection to the Catholic Worker community in New York City. Her earliest memories were of Dorothy Day and Peter Maurin, the founders of the Catholic Worker movement, a loose network of communities which seek to live the social gospel by providing hospitality to the homeless and witnessing against war and militarism, which they see as the root cause of poverty. Megan stressed the importance of community, for example the Catholic Worker and Jonah House community in Baltimore, for sustaining resistance. Megan hoped that people understood that by ‘catholic’ they were not talking about the hierarchy of the Roman Catholic church, but they meant catholic ‘with a small c’, that is a faith and action that is universal, that lives in solidarity with the poor and seeks to create a just and peaceful world.

Megan spoke too of her 40 years working with poor communities in Nigeria as a nun. After returning to the US and caring for her mother in her final illness, she went to work with the Nevada Desert Experience, a faith-based retreat and witness at the Nevada test site. She was eventually inspired to take this action by the five members of the Disarm Now Ploughshares, including the late father Bill ‘Bix’ Bichsel (who spoke at the Edinburgh Peace and Justice Centre three years ago).

Asked about how she prepared for prison, Megan shared that she had been imprisoned for shorter periods of time – twice for six months – after crossing the line at two of the mass demonstrations at the School of the Americas where the US has for many years trained members of the military from a number of Latin American dictatorships, especially in the 1980s and still today, in methods of torture. With this action, Megan never made it to an actual prison but was in a holding facility in New York city, in a single dormitory-style room where 60 women are held together, in many ways worse than a prison.

For Megan, as for women peace activists in US prisons generally, all of the women prisoners she met easily related to her resistance to injustice as they themselves experienced another side of the injustice of the US state directly. Resistance to nuclear weapons in the US brings activists face to face with the injustice of the for-profit prison-industrial complex, especially with the disproportionate imprisonment of people of colour that has burgeoned with the ‘war on drugs’.

Megan asked all of us to take a small action of solidarity and write to US president Barack Obama to urge him to give clemency to Michelle West, a woman sentenced to two life sentences for inadvertently aiding a drug deal, which she denies.

Brian Larkin is co-ordinator of the Edinburgh Peace and Justice Centre. The talk was jointly organised by the Centre and Trident Ploughshares, and supported by Edinburgh CND. Sister Megan and Paul Magno went to the Faslane nuclear submarine base the following day and joined a group of Glasgow Catholic Workers in praying for the disarmament of the Trident nuclear weapons system. These events were part of a European tour which also took in London, Malmo, Munich and Geneva. There will be NVDA (nonviolent direct action) trainings for Trident Ploughshares in the spring. More info:
training@tridentploughshares.org