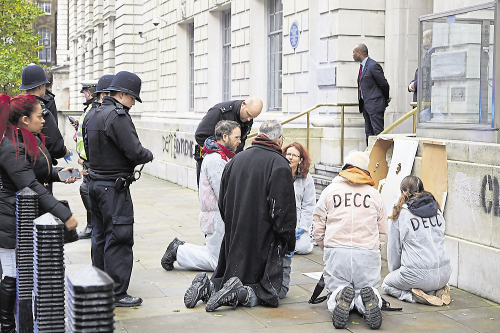 Five Christian climate protestors arrested in Whitehall on 30 November for writing in whitewash and black paint on the wall of the DECC (department for energy and climate change) have had their trial date set for 31 May and 1 June.

On the first day of the Paris climate negotiations, the five painted ‘Dept for Extreme Climate Change’ in black letters on the DECC wall, which they had whitewashed. They also delivered a letter to energy secretary Amber Rudd, prayed, and stood with a skeleton and a ‘whitewashed tomb’. (Jesus, in Matthew 23:27, says: ‘Woe to you, teachers of the law and Pharisees, you hypocrites! You are like whitewashed tombs, which look beautiful on the outside but on the inside are full of the bones of the dead and everything unclean.’)

Ruth Jarman said: ‘Climate change is the most serious danger facing the world that God created to be good.... we hope more Christians and others will be blessed with a holy rage, moved out of their apathy and led in love to prophetically resist climate ignorance and denial, realising our need for fundamental change and repentance.’

There is a video of the action here: www.tinyurl.com/peacenews1816