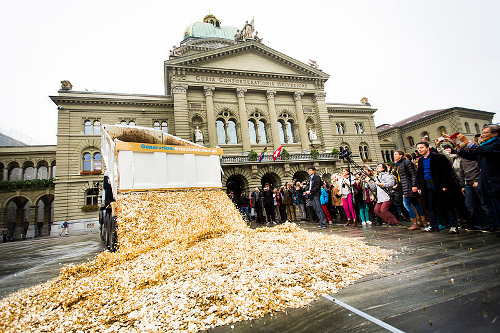 01 Feb 2016 News by PN staff
8 million coins are dumped on a public square in Bern as part of the campaign for a basic income. Photo: Stefan Bohrer

2016 may be a big year for the Basic Income, a universal, unconditional, guaranteed income, regardless of people’s availability for work or other income.

There’s to be a national Basic Income referendum in Switzerland in November. Last year, the Swiss parliament overwhelmingly recommended a ‘no’ vote in the referendum.

Despite this, one poll showed 49 percent in favour, 43 percent against, and another 8 percent wanting to know the exact amount involved.

In Switzerland, a citizens’ initiative can get a referendum if it gathers more than 100,000 signatures; the ‘Popular Initiative for Unconditional Basic Income’ managed 125,000.

Interestingly, the Swiss Greens oppose this particular proposal on the grounds that ‘it could level down the benefit system to the detriment of those who do not find work or cannot work’.

Meanwhile, Finland is committed to a national Basic Income trial, giving a small group of citizens (chosen through a lottery) €550 each month. Experts will make proposals in March, a system will be chosen in November, and the pilot will be run in 2017. A poll for the Finnish benefits agency, Kela, found that over two-thirds of the Finnish population favours a national basic income.

A means-tested guaranteed income for welfare recipients (not universal, not unconditional) started a trial in Utrecht in January – 19 other Dutch municipalities are considering similar schemes.

In December, in the state of Rio de Janeiro, Brazil, mayor Washington Quaquá introduced an unconditional universal Basic Income for all 150,000 residents of the municipality of Maricá. If you have lived there a year or more, every month you will receive ten Mumbucas – a local solidarity currency.

In the French region of Aquitaine, Socialists and Greens are expected to carry out their election promise to pilot an unconditional minimum income after they won the regional elections in December.

In November, Frédéric Lefebvre, an MP from the right-wing Les Républicains, proposed a punitive, anti-welfare form of Basic Income (restricted to citizens) in the French national assembly. In January, a more progressive version was put forward by Delphine Batho of the Socialists.

In the UK, two polls last year by ComRes found wildly varying degrees of support for a Basic Income: 36 per cent (March 2015) and 18 per cent (December 2015). (The wording of the second question was much more negative.)