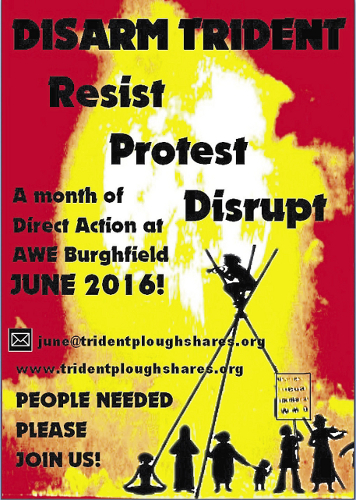 With conceptual work for replacement Trident submarines already eight years underway, it can seem as though the renewal of Britain’s Trident nuclear weapon system is inevitable. But the debate is not over, and grassroots activist and research organisations still hope to stop Trident replacement and pave the way for complete nuclear disarmament

The biggest event of the next few months will be the Stop Trident national demo, a rally and march to Trafalgar Square on 27 February, organised by the Campaign for Nuclear Disarmament (CND) and supported by the Campaign Against Arms Trade (CAAT), Greenpeace and the International Peace Bureau, among others.

Recent direct action for nuclear disarmament in the UK has included the Wool Against Weapons project that made headlines in 2014, and Nukewatch UK’s continuous monitoring of the movement of British weapons of mass destruction.

Perhaps one of the UK’s best-known nonviolent direct action groups focused on nuclear weapons is Trident Ploughshares, founded by Angie Zelter in 1998. The Ploughshares movement is a direct action campaign for disarmament that began in the United States and exists throughout the world. In the UK, Trident Ploughshares aims specifically at putting an end to the Trident system. According to their website, more than 200 of their activists have signed a pledge to prevent nuclear crime.

Zelter was responsible for founding the year-long protest movement ‘Faslane 365’, an attempt to continuously blockade Trident’s Faslane naval base in Scotland for a year (beginning in October 2006). This June, Trident Ploughshares are focusing a similar effort on Burghfield, where major facilities of the Atomic Weapons Establishment are located. The group is trying to get every Monday to Thursday covered for the month of June.

‘What we’re trying to do at Burghfield is a mini-version of [Faslane 365],’ Zelter said. ‘But we won’t just be blockading this time. It will be any kind of civil resistance. It might be going into the base and doing inspections, painting the fence, cutting the fence or blockading or sending things into the base – anything that’s nonviolent and creative and especially if it makes any of the links between, say, climate change or poverty or nuclear power or arms reduction or anything that people feel a connection with.’

As part of the Burghfield actions, there will be an academic seminar on 16 June to which students are invited.

Another recent Trident Ploughshares initiative is the ‘Public Interest Case Against Trident’ (PICAT), which aims to bring the crimes involved in keeping and renewing Trident to domestic courts. Under PICAT, groups in England and Wales will visit their local magistrates’ courts and request the criminal prosecution of the secretary of state for defence. PICAT was established by Zelter, lawyer and author Robbie Manson and the late George Farebrother, and is supported by another prominent direct action group, Action AWE.

‘Trident and all the policies associated with it are conspiracies to commit war crimes, so we want to get that into court.’ Zelter said. ‘We are encouraging groups to get a few people together or even just one person and send a letter to the secretary of state, first of all asking him to sign a declaration saying he would not use nuclear weapons... and then, when he doesn’t sign that declaration, to then go to court with the documents and the evidence and try and get a summons for his arrest.’

Zelter said the main challenge is getting people involved.

‘There’s just a lot of despondency and despair and people that think there isn’t anything they can do to change the terrible things that are going on in our society,’ she said. ‘So the main problem is getting people to realise they can do something and that it does make a difference.’

Zelter will be going to court in Wales on 3 February to present documents and to ask for the prosecution process to start. Another group in Norfolk is almost at this stage and a few others are beginning to write the first letter, Zelter said.

‘It shouldn’t really take very long to do, but it just takes groups a while to discuss it, and sometimes they’re worried that there might be repercussions, but in fact, it doesn’t cost anything,’ she said. ‘There are no risks involved. It is completely lawful to do this kind of thing.’

While direct action groups are participating in hands-on protests, research groups including the British American Security Information Council (BASIC), the Acronym Institute and the Nuclear Information Service (NIS) are investigating the issues and ensuring that the debate about Trident replacement is better informed.

These research groups will be publishing new reports in the coming months, and some, like Scientists for Global Responsibility (SGR), will be sending their research to politicians as well as speaking at public meetings.

‘We’re helping to change opinion within the science and technology community,’ SGR director Stuart Parkinson said. ‘There are a lot of scientists and engineers who are critical of these sorts of weapons systems and support alternatives and support arms conversion and particularly into areas such as greener technologies which are so urgently needed to tackle climate change.’

One of the primary goals of the Oxford Research Group (ORG) is to expose the mystery surrounding the politics and technology of the British nuclear weapons system, Tim Street, senior programme officer on ORG’s sustainable security programme, said.

However, the message is not always easy to get across. Paul Ingram, executive director of BASIC, said that often people don’t want to listen.

‘The main challenge is that people are not particularly open to rational conversation about Trident,’ he said.

The impacts of recent terrorist activity and the rise of ISIS have also created an obstacle.

‘There’s a knee-jerk reaction that comes from the government, from the political elite, from the military, saying we need to use weapons, we need to intervene, we need to get involved in yet another war in the Middle East, and that would make it safer at home by tackling terrorism,’ Parkinson said. ‘And that’s a narrative which the media and a large section of the public embraces. The mainstream media is quite willing to pass on that message without critically examining it. That makes it harder when you’re arguing for a more measured response.’

Despite these difficulties, research groups like SGR remain optimistic that even if majority opinion in political parties cannot be changed before the Trident decision, the media coverage of the debate has shown new perspectives and could help global nuclear disarmament in the long run.

‘The government is hell-bent on going ahead with it and it’s got enough of a majority in parliament to push that through,’ Parkinson said. ‘But the debate is now happening in the national media, and that’s a big help. Suddenly, you can get attention for different arguments.’

Instead of using investigative research and logical thinking, faith groups are using morality and ethics to convince people to join the movement for nuclear disarmament. Scottish Christians Against Nuclear Arms (SCANA) has drafted an investigative study on Trident, and is collecting signatures showing support for the following statement: ‘We believe that the possession and threatened use of nuclear weapons is an offence against God and humanity.’

A few groups, including Christian CND and the Quakers, are contributing an interfaith event to the Stop Trident national demo on 27 February. The event will begin with an interfaith prayer at 11am at Hinde Street Methodist Church in central London, followed by a march to Trafalgar Square under the banner ‘No Faith in Trident’.

CND has a number of events during January and February. For example, on 23 February, CND general secretary Kate Hudson, Peter Burt of NIS, Trident activist Marcus Armstrong and Josh Chown of Youth and Student CND will speak at a Milton Keynes public meeting organised by MK Momentum for Corbyn.

CND is organising an action day on 6 February and a Stop Trident placard competition with artist Peter Kannard: artists are invited to submit placard designs that might appear in the press coverage of the national demo. (The deadline is 11 February.)

Scrap Trident has a Scottish Day of Action Against Trident on 14 February, and a pledge to stop Trident replacement and remove nuclear weapons from Scotland and everywhere else.

ICAN is extending its efforts to reveal the risks and dangers of nuclear weapon convoys.

The international organisation is also making headway on a treaty to ban nuclear weapons with an open-ended working group which will meet for up to 15 days in Geneva in 2016.

‘We’re raising awareness of the negotiations which are leading to a global nuclear weapons ban,’ Sharkey added. ‘It’s absolutely vital that the international perspective informs the debate about the renewal of Trident and that rapid progress is made toward negotiations on the treaty banning nuclear weapons.’

Natalie Shanklin is a US student journalist working with PN in London.