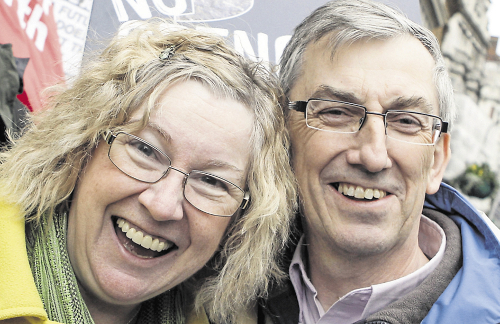 After the consortium Miller Argent had their proposal for a six-million-tonne open-cast coal mine, Nant Llesg near Rhymney, rejected by Caerphilly council last summer you would have been forgiven for assuming that, after years of the scheme being hotly contested, that was the end of the matter. Not a bit of it.

Despite the strength of resistance to the proposal locally as well as across Wales and a wider world, despite coal being anathema as a fuel in a 21st century beleaguered by the capitalist curse of climate change, despite six million tonnes of coal producing an unacceptable 13.6m tonnes of CO2, and despite other coal companies going to the wall as the market is inundated and the price plummets, zombie-like Miller Argent refuses to go gentle into that goodnight. Astoundingly, the company is now trying to enclose common land as a first step towards appealing against the council’s decision.

Guy Shrubsole of Friends of the Earth writes: ‘The company clearly love local democracy, because they lodged their appeal on Christmas Eve and took out an advert about the common land enclosure application in the backpages of the local paper on New Year’s Eve – giving 28 days to lodge an objection. I’m reminded of the scene in The Hitchhiker’s Guide to the Galaxy where the Vogon Constructor Fleet announce the planning application for the new intergalactic highway that will destroy the Earth has been on display for four years on Alpha Centauri, so what are people complaining about!’

The final decision on the appeal will be made by the Welsh government’s planning minister. Chris Austin of the United Valley Action Group (UVAG), which opposed the Nant Llesg mine, believes Miller Argent have acted cynically to separate the enclosure and mining proposals: ‘UVAG’s campaign has been complicated by the common land/rights of way planning application being submitted prior to the appeal against the open-cast mining proposal. We are arguing about the stopping of rights of way and closing off common land in isolation prior to any details of the open-cast coalmine being presented. Because they have disassociated this application, there is a deadline for objections to this initial application of 28 January 2016, despite the two applications being heard together by PINS later in the year. This makes it difficult to formulate objections because they can’t be in the context of the opencast coalmine – despite the fact of the two being inextricably linked!’

Last August, courageous Caerphilly councillors defied the dinosaurs who serve as their planning officers and resisted coercive threats of legal action from Miller Argent. Their resolve was stiffened by the volume and quality of objections. If Nant Llesg is finally to be consigned to the dustbin of history, we must all campaign to keep up the pressure and help the council stick to its decision.