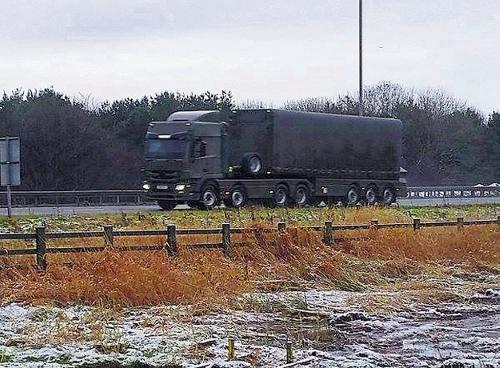 Veronika Tudhope, assistant coordinator of Scottish CND, was approached by two police officers while she parked by Stirling Castle. The officers said her car had been reported for ‘erratic driving’ and asked to see under the bonnet.

They then detained her until 10 minutes after the convoy had passed. Veronika commented that she’d been driving safely in Scotland for 27 years without ever before attracting police attention.

Meanwhile, Alisdair Ibbotson of Stirling University CND was standing with a colleague at a roundabout nearby when a police officer demanded their names, addresses, dates and places of birth and nationalities. The pair were told that failure to give these details constituted an offence and might result in arrest.

However, under the Criminal Procedures Act 1995, a police officer can only ask for these details if they have reasonable grounds to suspect someone of committing or being a witness to a crime.

On this occasion the officers dropped their request for the details after the convoy had passed.

A Scottish National Party member of the Scottish parliament, Bill Kidd, wrote to the chief constable to protest at this police harassment of peace campaigners.