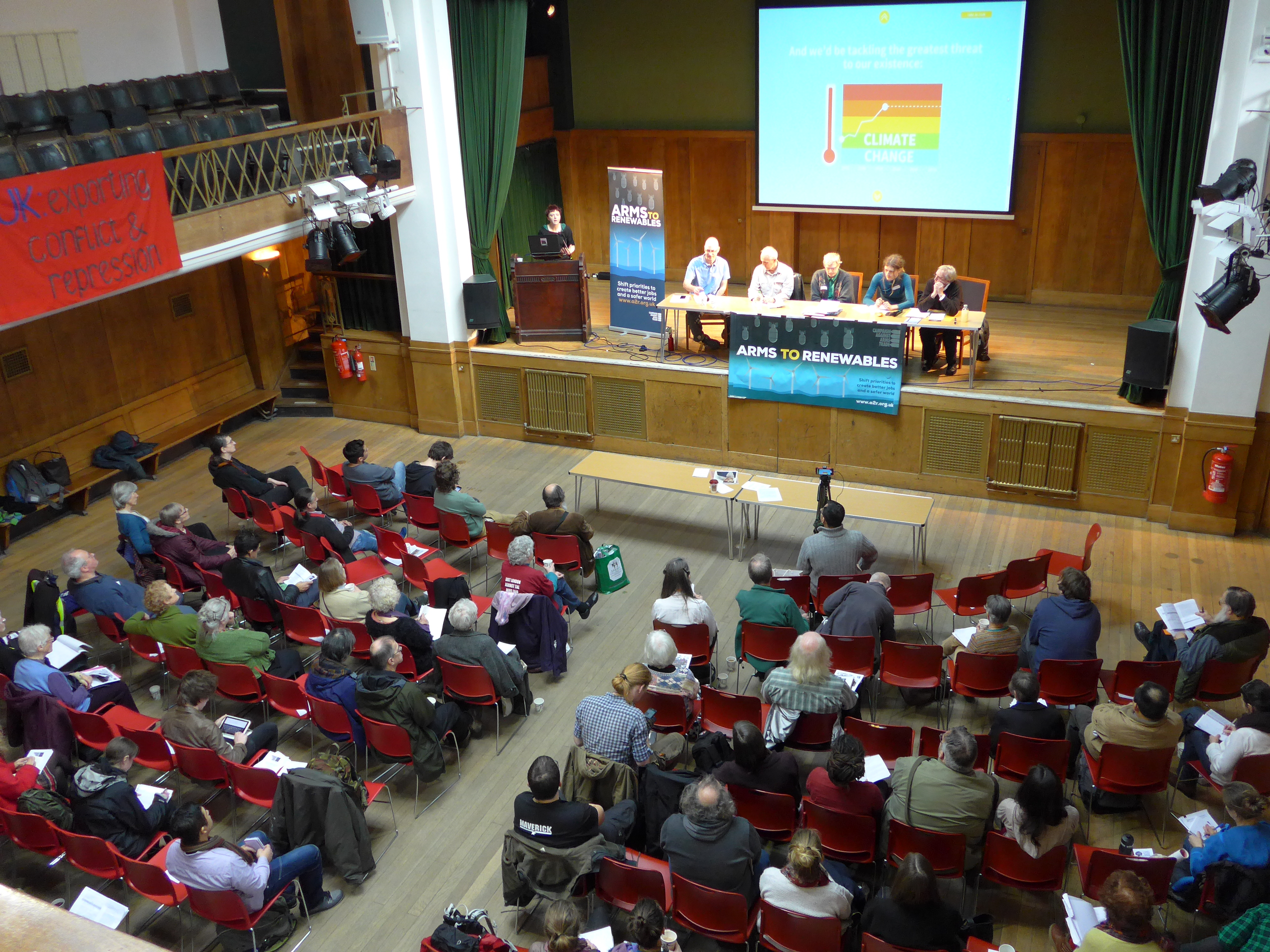 One of the most powerful speeches at the CAAT national gathering this year came from Sayed Alwadaei, a Bahraini activist who was imprisoned for taking part in pro-democracy demonstrations and then had his citizenship revoked in Bahrain.

Sayed reminded us of the terrible human cost of the arms trade, and the impact that those of us campaigning over here can have. ‘Your action gives Bahrainis a voice’, he said, ‘The people of Bahrain who are struggling for democracy are looking to you’.

The Bahraini regime is among the most oppressive in the world, and yet this year it has been listed as a ‘priority market’ for UK arms sales.

The issue goes wider than Bahrain, In the last four years alone, Britain’s coalition government has licensed £3.8bn worth of arms to Saudi Arabia, a dictatorship with an absolutely appalling human rights record.

No war, no warming

The Campaign Against Arms Trade national gathering in London in mid-March saw 123 activists from around the country getting together to talk about how we can build alternatives to arms sales and war, and how the UK can harness its resources to take action against the biggest threat we all face: climate change.

CAAT’s new ‘Arms to Renewables’ campaign set the backdrop for an exhilarating and inspiring day that centred on how we can make the positive shift from militarism to green energy.

It may seem like an obvious solution, especially at a time when there is a severe skills shortage in science, technology, engineering and maths. However, at present the government spends 25 times more every year on research and development (R&D) for the military (£1.5 billion) than it does on R&D for renewable energy (£59 million).

As things stand, the UK is pouring resources into an industry which has a devastating impact on security at home and abroad. Investment in green energy would lead to better jobs for the workers and for all of us: jobs in an industry that is growing not declining, and jobs that can create a safer, greener world.

Every time we undermine the power of arms companies we work towards this brighter and more positive vision.

Activists also took part in workshops about the ways we can challenge the DSEI arms fair, which is due to take place in East London this September; how we can push the arms trade out of public life and away from museums and schools; how arms companies were responsible for arming all sides in the First World War, and much more.

Guest speeches came from writer and researcher Nicholas Gilby, who spoke about his book Deception in High Places: Corruption in the Arms Trade, and David Wearing, author of Arming Apartheid, (a forthcoming report from CAAT, War on Want and Palestine Solidarity Campaign) on arms sales and military cooperation between the UK and Israel.

Open session workshops were hosted by participants and groups that work with CAAT, including Privacy International, who lead an excellent discussion about surveillance and the arms trade, and ForcesWatch, who highlighted the ways in which arms companies are targeting young people and militarising our society.

The day also saw the first-ever screening of Arms Trade On Trial. This film has been made by a determined group of activists who took legal action against two arms companies caught selling illegal torture equipment at DSEI last year.

The case was dropped by the crown prosecution service, but the activists have kept up their campaign and are working with CAAT and others to shut down the arms fair and end the arms trade for good.

The closing plenary session came from Guardian columnist Owen Jones, who gave a stirring speech which voiced his support for the ‘Arms to Renewables’ campaign, as well as stressing the importance of campaigning on the ground. Jones berated the links between arms companies and our politicians and reminded us that ‘everything we’ve achieved in this country is because of the struggle of people from below’.

It was the perfect end point to a constructive and inspirational day, and energised and enthused activists around the belief that, despite the odds and the vested interests, it’s a campaign we can win, and together we can build a better, safer world for all of us.

Events like this are vital to building and strengthening our networks and bringing people together.

It’s a campaign that is becoming more urgent and crucial, and with DSEI just around the corner we need to work together if we are to end the culture of militarism and war and to assert the importance of human needs over arms company interests.

There is no doubt that it will be a long, hard road to end the arms trade, and it starts when any of us stand up and say enough is enough.

More info about Arms to Renewables and CAAT at: www.A2R.org.uk and www.caat.org.uk