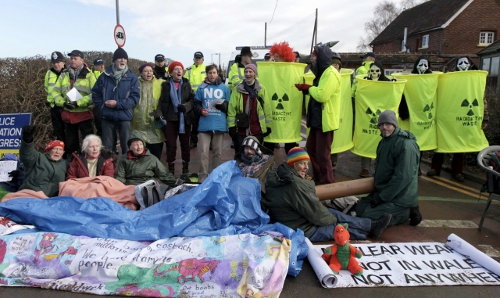 On 24 January, as part of a UK-wide protest at the cost of Trident, CND Cymru and radical choir Côr Cochion were joined at the Royal Gwent Hospital by activists from across Wales. Patients and visitors joined in, and choir singing was accompanied by toots of support from passing motorists.

As part of a month of action against Trident in the lead up to the election, Côr Cochion were in action again at Burghfield in March.

The choir blockaded the South gate of the nuclear bomb factory from 6am until late afternoon, passing the hours with songs and listening to moving personal testimonies. Ray Davies of Côr Cochion said:

‘We truly were, as the song says, a land of many colours: Japanese Buddhists, American peacemakers, young peace activists and veterans of Greenham Common and Faslane in Scotland. Two of the drafted-in police at North Gate were Welsh, apparently appreciating our rendition of Welsh peace songs’.

When a policeman threatened to arrest him, Ray led him into a circle of dancing protesters. The officer immediately dropped Ray’s hand and fled.

With the aid of young protesters from Sweden, France and North America, all three gates were closed. The day ended by marking the death of father Bill ‘Bix’ Bichsel, a fearless US peace activist, by calling his name and shouting, ‘Presente!’

Angie Zelter commented: ‘We’ve had a fantastic start to this month. Now we have to keep the momentum going for this once-in-a-lifetime opportunity. All parliamentary candidates need to know that they won’t win votes at the 2015 election unless they make clear they will oppose Trident renewal’.