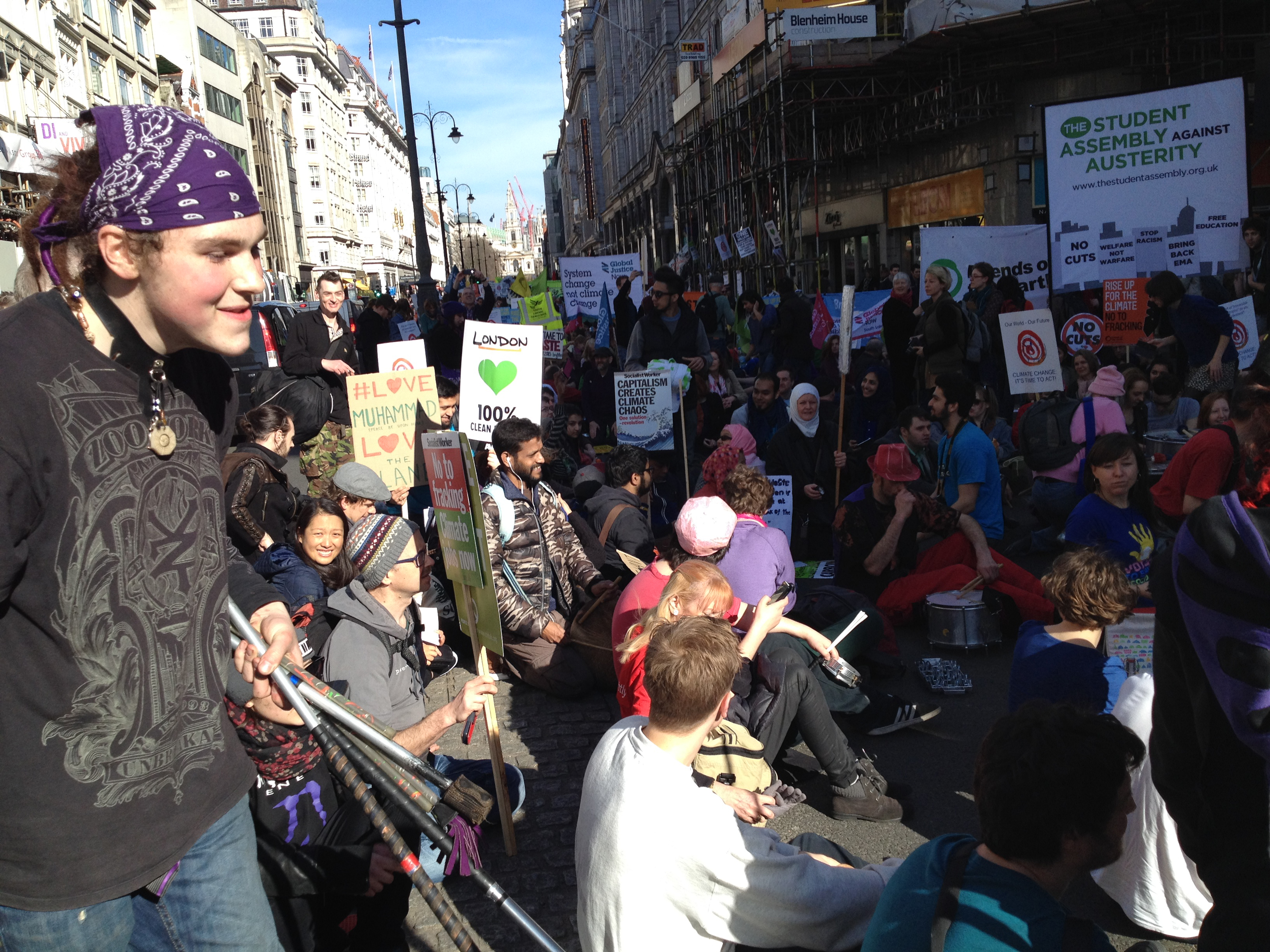 PN's editor reflects on the choices facing activists before and after the May 2015 election.

Two of the most important things the next British government will do are: take part in the Paris climate negotiations in December, and decide on the replacement (or not) of the Trident nuclear weapon system next year.

On both issues, smaller, more progressive parties like the Scottish National Party, the Green Party and Plaid Cymru are likely to have a bigger impact than usual after the general election on 7 May. The SNP is projected to win over 50 seats; the Greens have a good chance in Brighton and Norwich; Plaid think they can improve on the three seats they currently hold. With no party likely to take a majority of seats, this block of MPs could be very influential.

On Trident, it is vital that the peace movement continues to press for immediate, unconditional nuclear disarmament. There are many valuable peace movement initiatives going on in the run-up to the 2016 Trident replacement decision, including the Action AWE ‘Act, Speak Vote > Disarm!’ campaign of nonviolent direct action, lobbying and voting.

However, given the current balance of forces between the peace movement and the military-industrial-political-media establishment, we might count ourselves successful if we manage to push a replacement decision back beyond 2016.

This delay would allow us to build up a stronger possible coalition for peace and justice here in the UK, and to create the most favourable international environment.

A discussion on whether to replace Trident will feel very different if a large number of countries in the world have negotiated and signed a treaty prohibiting nuclear weapons.

At the time of going to press, 61 countries (including Iran) have signed up to just such an abolition process, led by Austria.

The single most important factor affecting the Trident replacement decision will be how many seats the Scottish National Party takes from the Labour party. If Labour wins a majority, it will do its best to simply press ahead with Trident replacement. If the SNP win anything like the number of seats currently predicted, Labour will be trying to form a minority government, and will have to negotiate with the SNP over Trident.

In December, the Nats joined the Green Party and Plaid Cymru in stating that they would only support a Labour minority government if it agreed not to replace Trident.

Then, on 6 March, the Guardian interviewed Nicola Sturgeon, leader of the SNP and first minister in the Scottish government, and she indicated that the SNP would not insist on a minority Labour government renouncing Trident replacement on Day 1. Sturgeon said that the nationalists would support Labour on a case-by-case basis – but would never vote for Trident replacement.

Taken literally, that position would open the way for Trident to be replaced by a similar submarine-launched nuclear weapon system, because SNP votes would not be needed in parliament (because the Conservatives would vote for it).

At the Trident strategy day held by Nuclear Information Service in February, a well-informed observer suggested the SNP was negotiating about Trident replacement with Labour, seeking a commitment to a ‘high-level review’. It’s possible that Sturgeon signalled her change of position publicly on 6 March because she’d managed to get a commitment from Labour about this.

We are likely to see even more change from Sturgeon. Politicians tend to water down their principles as they get closer to power. No one should rely on the SNP to deliver nuclear disarmament: the nationalists need to be pressured to live up to their earlier commitment not to support a Labour minority government unless it gave up on Trident replacement.

Talking of long shots, a little ray of hope came out of the Lima climate talks in December.

The final conference text included the possibility of setting a long-term goal of decarbonising the world economy by 2050 – of switching to 100 per cent clean energy in the shape of wind, wave and sun power.

This aim is some way beyond the 14 February climate change agreement signed by the Conservatives, the Lib Dems and Labour.

The three parties tried to take climate change as an issue out of the election by making three commitments:

The pledge was brokered by the Green Alliance, supported by a range of NGOs including Christian Aid, Greenpeace and the royal society for the protection of birds (RSPB).

It is important that the three parties made the agreement, which protected the Climate Change Act from right-wing attacks, but promises like this don’t mean anything by themselves.

Anyone remember Cameron vowing to deliver ‘the greenest government ever’ on 14 May 2010? Or Tony Blair vowing to make a breakthrough on climate change – ‘the single biggest issue facing the world’ – in 2004 and 2005?

Promises like this gain meaning only if there is irresistible political pressure forcing governments to live up to their commitments.

We can be inspired by the example of the Turkish parliamentary vote on 1 March 2003, which banned Turkish participation in the US-led attack on Iraq, despite the US exerting huge pressure, and offering a bribe of $30bn in aid and credits.

Then-prime minister Recep Tayyip Erdogan, in a more democratic phase of his career, made the mistake of allowing MPs a free vote, which allowed the enormous civil society pressure to have its full effect.

The 50,000-strong anti-war demonstration in the the centre of Ankara on the day of the vote was the biggest public assembly in the Turkish capital in 20 years.

The intense lobbying of parliamentarians by their constituents continued right up to the vote itself. MPs were reportedly rung on their mobiles – in the chamber – as the motion for war was being debated.

It was not enough that the overwhelming majority of Turkish people were against the war, that public opinion needed to be intensified, mobilised and turned into effective pressure.

Looking back, the British parliamentary vote to go to war on 18 March 2003 was a close-run thing. The ministry of defence panicked a week earlier on ‘Wobbly Tuesday’, drawing up plans for withdrawing from the invasion force, because ministers believed they might be about to lose the 18 March vote because of the strength of the anti-war movement inside and outside the parliamentary Labour party (see PN 2551).

The next time we reach a crunch policy point in parliament, we need to be more like Ankara on 1 March.

A Labour-led government backed by the SNP was described by one corporate leader in the Financial Times on 28 March as a ‘nightmare coalition’.

The FT interviewed the chairperson and chief executive in 20 of the largest corporations listed on the London stock exchange. A majority opposed SNP involvement in running the UK. One top chief executive said a Labour-SNP coalition would ‘drive fear and shockwaves through the business community’. Sounds good to us!

Another said: ‘The current SNP leadership has a pretty unreconstructed 1970s socialist agenda.’ If only that were true. The SNP isn’t even as redistributive as conservative icon Margaret Thatcher.

During her administration, corporation tax averaged 43 per cent (it’s now 21 per cent), and for most of that time she kept the top rate of personal income tax at 60 per cent (now 40 per cent).

Anyone proposing raising tax rates to these 1980s (Thatcherite) levels would be called an ‘unreconstructed 1970s socialist’ – neither Labour nor the SNP are doing so.

Peace News has a long history of advocating abstentionism. In this election, voting can make a difference.

Our advice would be to prioritise voting for parties or candidates who have a principled commitment to the 2050 decarbonisation goal and/or to not replacing Trident.

That gives a wide range of possibilities to support. We think voting Green should be the default position for folk who’re willing to vote at all – unless you’ve got a sitting left-wing Labour MP like John McDonnell.

It’s useful to have strong voices for climate stability and peace inside as we press from outside.