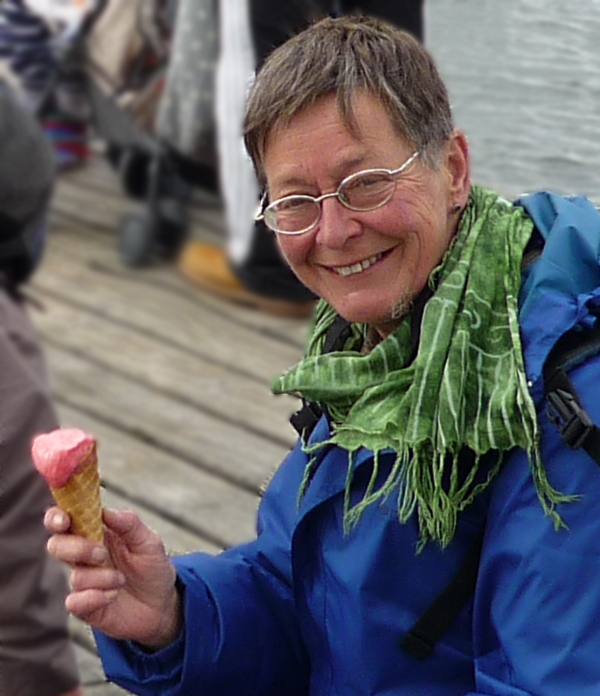 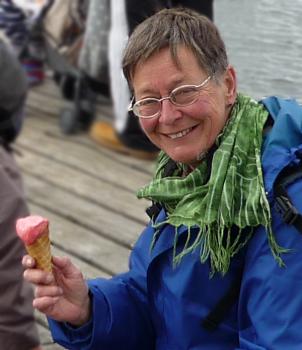 Rosie Foster, who died a couple of short months after being diagnosed with cancer, was an extraordinary human being who made a deep impression.

I can’t remember when I met Rosie – it seemed she’d always been around in Leeds and I knew she had lived in Tangram Housing Co-op in the ’90s and had some involvement in Horton Women’s Holiday Centre.

Our lives properly connected after she moved to Nutclough Housing Co-op in Hebden Bridge and joined Radical Routes’ coordinating team for the Co-operators Camp at the Green Gathering last year. (Radical Routes is a network of housing and worker co-ops and social centres.) Rosie’s role as logistics co-ordinator was perfect – whatever we needed, she knew where to find it, who to borrow it from, or she’d been storing it herself, waiting for it to come in useful. And she made the beautiful Co-op Camp banner.

Our crew of co-operators who came together there was inspired, challenged and kept in check by her – and not only when it came to the washing up. She was determinedly grounded in the practical necessities of life, love and radical action.

In the weeks since she died, it has become apparent just how remarkable she was. ‘I didn’t know you knew Rosie’ has been a phrase in many a conversation, as she had her fingers in so many pies. Even since last summer, she was at the Blackpool anti-fracking Reclaim the Power gathering (tea provider for those on all-night gate duty) and involved in the Withington Eco-House co-op being built in Manchester.

And it turns out she was part of the original group of people who actually set up Horton Women’s Holiday Centre – she was in the auction when the house was bought in the late ’70s. And when they had trouble recruiting staff not so long ago, it was Rosie who held the fort, working there for several months because it had to be done. She made things happen that others thought could not be done and could be infuriating in her determination. She was truly indefatigable.

She was in the middle of every struggle, in every campaign that had to be fought – one old friend mentioned finding her sat in the middle of the road during a big demonstration in London and I responded with the same experience at a Gaza demo in Leeds.

Rosie felt things keenly, sometimes exuberantly happy and optimistic, sometimes hurt or incredibly angry. She loved nature and nurture – mixing them both, nurturing relationships, nurturing people, nurturing plants. She taught her girls to enjoy going barefoot in mud and taught her toddler housemate which garden plants were safe to eat.

She was a campaigner, a maker, a builder, a co-operator, a carer, an artist, a gardener, a carpenter and an enthusiast, always full of ideas, love of life and love of people. In the ’70s, she organised in Women Against Violence Against Women and Women’s Aid and helped set up a women’s housing co-op in Leeds.

Come the ’90s she fostered two little girls, and then fought the system to be able to adopt them as a single gay woman. Recent years saw her involved in Occupy, charcoal-burning, polytunnel building and anti-fracking campaigning, including an arrest at the Barton Moss fracking site near Manchester. In her last months, when bed-bound, she piled up pillows on her bed so her little co-op housemate could jump off the cupboard onto them.

She leaves behind her a vast array of family, friends, lovers and comrades.

The last word goes to a fellow Co-op Camper, who knew her only for one week: ‘If we were all motivated by her example to live today as if justice, peace and the environment mattered more than anything else, we’d still barely approach the altruism, energy and passion that Rosie brought to everything she did. But we can – and should – try.’