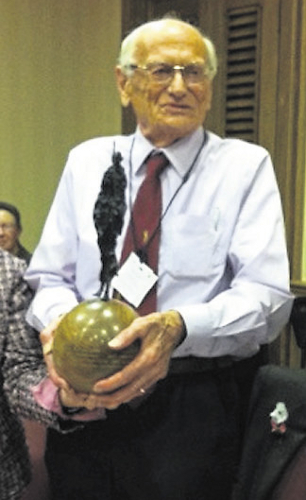 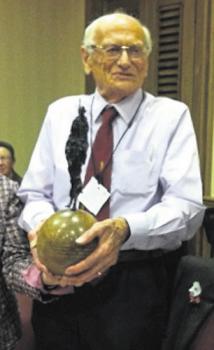 The international peace prize of the Gandhi Foundation for 2014 was awarded jointly to Godric Bader, the last surviving founder, former managing director and chair of the Scott Bader Company Ltd, and to the Scott Bader Commonwealth, a charitable trust which holds the company assets.

The firm, founded by Godric’s father in 1921, was a private company until the family gave the shares to the newly-formed ‘Commonwealth’ in 1951.

Since then, as the award citation records, ‘The people who work for Scott Bader are trustees-in-common and therefore have a greater commitment to the well-being of the company and its preservation for future generations.’ Christian, Quaker and Gandhian values have strongly influenced the family and the company structure.

A medium-sized business in Northamptonshire, Scott Bader develops polymers, adhesives and coatings for boats, vehicles and wind turbine blades, amongst other applications.

Presenting the award was Bhikhu Parekh, president of the Gandhi Foundation, who chaired a large gathering of Scott Bader people, Gandhi Foundation members, the Bader family and friends, at the house of lords on 30 October.

“It has passed the test of time and continues to show a robust alternative economic of co-operation, distribution of wealth and obligation to natural resources.”

Lord Parekh recalled that the Scott Bader business model faces stiff opposition from traditional capitalistic companies; ‘But it has passed the test of time and continues to show a robust alternative economic of co-operation, distribution of wealth and obligation to natural resources. Gandhi Foundation trustees noted Scott Bader’s commitment to a wider socio-economic vision as part of their national and international responsibility; they are following the Gandhian way.’

Godric Bader, who was appointed life president on his retirement, expressed his delight at the honour and ‘that the Commonwealth is receiving recognition as a living working example for nearly 70 years of a struggle to build and demonstrate a viable basis for making a truly democratic and worthwhile working life.

‘Whether in our lab, factory or office, it is our endeavour to live out the 1661 words of the Quaker, George Fox: “To live in that life and power that takes away the occasion of all wars.”

‘We had worked together in the war; why not find common ground in working for peace? The example of Gandhi’s life is to build peace between people in the world and shows that resort to war has no place in the way we want to live our lives and enjoy our unique planet. It was our answer, after the Second World War, to those who came back from the forces saying “Never again”.

‘It took several years to convert a 30-year-old private company to one of Common Wealth that could not be bought and gambled on the stock exchange, having its work force and their jobs gambled too. Without fundamental change we have no hope of living peacefully on our unique earth. “Don’t blow it – good planets are hard to find!” (Time magazine)

‘Any ambition of further growth is no longer economic. Equality of distribution is the growth we need, and above all, growth in common sense. As Gandhi said: “There is enough for everyone’s need, but not for everyone’s greed.” ’