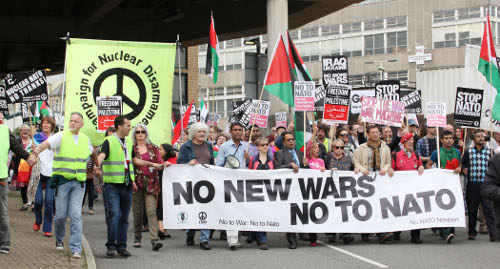 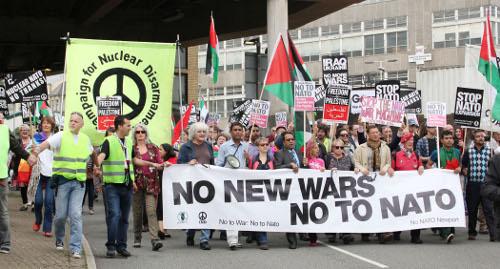 On 2 September, the annual meeting of the international network ‘No to War – No to NATO’ called for the abolition of NATO. They rejected the planned opening of further NATO military bases and the deployment of soldiers from NATO member states to Eastern Europe, and stated that the ‘conflict in Ukraine has been substantially escalated by NATO’. The network went on: ‘Currently, NATO views Russia as an opponent and holds Russia and Vladimir Putin responsible for almost everything that happens in the conflict in the Ukraine. The EU’s actions – the agreement of an association with Ukraine, including a military component – and the “Special Agreement” between Ukraine and NATO are hardly de-escalating processes and neither is the whole Eastern expansion of NATO. In addition, the verbal armament of NATO against Russia is frightening.’

Leading up to the Stop NATO week of action from 30 August – 5 September, those taking part in ‘The Long March on Newport’ collected postcard messages from over 50 towns and villages for delivery to the NATO summit leaders. On 30 August, national and international protesters rallied in Newport with singing by Campaign Choirs Network, marching, and an impressive array of speakers, including legendary CND activist Bruce Kent and peace activist Margaretta d’Arcy (of Shannon Airport fame) among others.

An impassioned Bethan Jenkins AM set the tone for the week to follow: ‘We are told that global respect can only be gained by swaggering through the world whilst flaunting such obscene trophies [as Trident missiles]. It would appear that a place amongst the first league of nations is not earned through compassion, ambition or collective feat; nor through the elimination of poverty, suffering and inequality. Rather, we must pay so that our leaders can wear the fetishes of destruction around their necks.’ She ended with a quote from Welsh peace activist Henry Richard: ‘My hope for the abatement of the war system lies in permanent conviction of the people, rather than the policies of cabinets or the discussions of parliaments.’

The full ‘No to War – No to NATO’ statement can be seen on: www.no-to-nato.org. No NATO Newport: www.nonatonewport.org; www.notonatowalk.org.uk