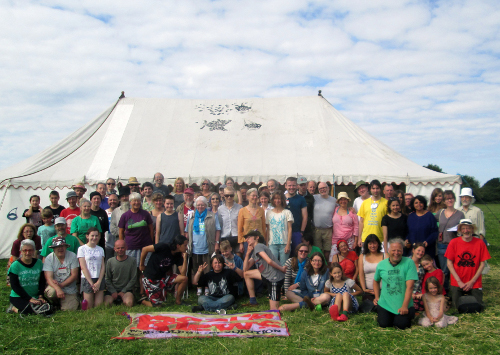 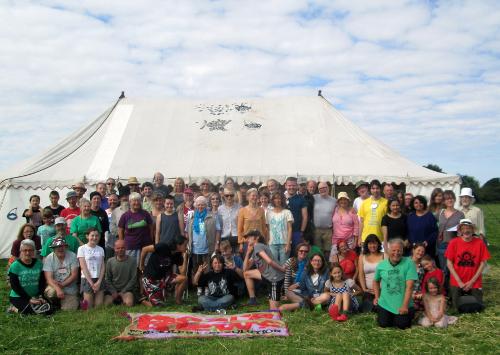 This year’s Peace News Summer Camp yet again enjoyed magnificently-sunny weather, marvellously-enriching workshops, and a spirit of warmth and inclusiveness that is hard to find.

Human rights campaigner Peter Tatchell brought decades of activist experience to bear in his workshop on ‘The ABC of Campaigning — How we won same-sex marriage’; Kofi Klu scrutinised the concept of reparations through a Pan-Afrikan perspective; Aneaka Kellay talked about the anti-fracking movement – and, separately, about depleted uranium; Australian historian Douglas Newton (on his first full day in Britain) exposed the deceit and undemocratic methods used in Britain’s rush to war in 1914; French peace activists Marc Morgan and Dominique Lalanne educated us about ‘French nuclear weapons today’; Belgian peace activist An Maewens talked about her group Vredesactie’s ‘CTL+ALT+EU – no military Europe’ campaign; Bruce Kent and Cath Bann set out how we could campaign against Trident replacement; we heard brilliant and moving songs from Robb Johnson and hedgemustard, among others; Dutch-Bolivian film-maker Chihiro Geuzebroek held the British première of her documentary about protecting Mother Earth; there were richly-informative workshops with leading academics Paul Rogers, Rachel Julian, Neil Faulkner, Michael Randle and Andrew Rigby; we had skill-building workshops (including ‘preparing for nonviolent direct action’) with Seeds for Change and London Roots; we spoke to the Afghan Peace Volunteers over the internet and Susan Clarkson related the story of her delegation to Afghanistan with Voices for Creative Non-Violence UK; Spanish activists Almudena Izquierdo and Yolanda Juarros Barcenilla explored ‘dealing with everyday militarism’ – they also contributed to the ‘Women in Black across Europe’ workshop, alongside Sian Jones of Netpol; and we thought about ‘life after capitalism’ with Michael Albert, one of North America’s deepest radical thinkers.

That is just about half the sessions we ran at the camp!

We also drew on local knowledge, with local councillor Ron Bailey explaining why we don’t need nuclear power at Sizewell (just a few miles away from us), and Zoe Readhead, principal of Summerhill, explaining the rationale for the famous libertarian school – just a mile down the road from our camp.

We also had a quiet, moving time to remember Howard Clark who died last November, who was a much-valued member of the PN family as well as being a PN director, and a committed PN Summer Camper.

There were some of Howard’s oldest friends in the circle as well as people who knew Howard just as a cheerful, uncomplaining washer-upper who was always ready to step up.

Thank you to all the organisers who made the camp happen over many months, the volunteers who put it together, Veggies for their sterling catering, the speakers for trekking out to Suffolk, and all the participants for creating a wonderful atmosphere of friendship and mutual respect!

There was very positive feedback from participants about the camp. We think about 140 people came to camp, of whom 38 filled in whole camp evaluation forms (12 online). The most highly-rated aspect of the camp was how it was run (average 8.7 out of 10), and the least-favoured aspect was its location, in terms of getting there from other parts of the country (7 out of 10). The workshops, the entertainment and the Children’s Space all got roughly the same score (around 8 out of 10). The food scored 7.3. Below are comments from the evaluation forms.

What I liked about PNSC

‘Everything! Best workshops ever. Nice ceremonies. Brilliant and kind people. Thanks to organisers.’ ‘I always love how un-cliquey it is and the great conversations, meeting new people & occasional workshop inspirations.’ ‘It was peaceful – v. well organised. The collective had energy – great tat down. There is nothing else like this.’ 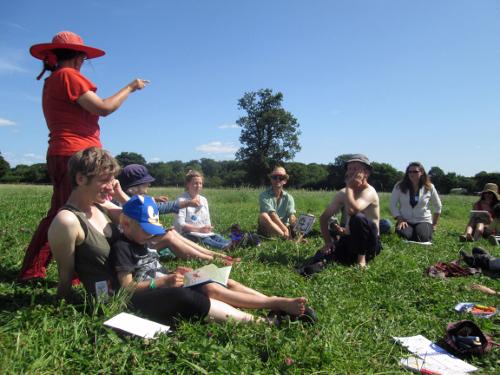 ‘The variety, sincerity, tolerance, concern, optimism, eclecticism – a positive example of how a better world can be.’ ‘Generally the attitude – helpful, joyful, optimistic, selfless –
of all.’

‘The workshops of “The Rush to War, 1914”, the reasons for war by the Marxist historian, think his name was Neil & Arming All Sides by Kat of CAAT were simply superb, 10/10. The information content was excellent & CAAT’s methodology was conducive to a great workshop. All workshops were great though. Everyone was so friendly.’

‘It felt a very safe and trusting environment which I appreciated. I was extremely thankful for the enthusiasm that Saida approached her role in the children’s tent… almost exclusively full-time. A big thank you to her! The meetings held to delegate roles seems an effective and fair way to organise and include people in the running of the camp.’

‘Not have the toilets at the entrance – would be nicer to have a peace arch – I’ll think about it!’ ‘The disabled loo needs to be raised as squatting is the difficulty many have as we age. I know this means construction – sorry.’ ‘Toilets were better this year. Camp fire not so good. All round superb, well-organised, great workshops. This is the second year I have been and it was better, even, than last year.’

‘Location – too far from railway station, taxis a problem.’ ‘Location that made it easier for people coming from different parts of the country to get to (more geographically central location); location with better local public transport connections; I think there are too many competing workshops during each slot.’

‘I want to pass on Kofi Klu’s question: why hasn’t Peace News Summer Camp made connections with other grass roots movements? Why aren’t there similar camps happening in other places?’

‘Diversified community link-networking at local, national and international levels. What about links with parallel camps all over the World, for example by Skype?’

‘A communal area that was open-air with a good-sized fire-pit, where people could congregate would have been good. All in all, it was a really positive experience. In reality you won’t please everyone and I think the organisers did a good job with what was available to them. Thank you guys. ;-)’

‘More tables, bit of nice decor / bunting goes a long way! Workshops slots should be shorter with overrun spaces. Some people feel they have to fill 2 hours when it would be much better in 1 hour, 1½ hours.’ ‘Field very open, so windy (Shropshire preferred...).’ ‘The organisers are all wonderful!’

‘I hope to stay longer next year. Thank you for well organised camp.’ ‘So glad I came, benefits will follow for me, my friends and Leamington Peace Festival for years to come – with love and thanks and hope!’