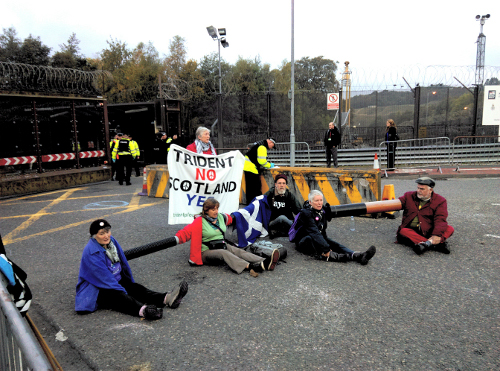 David Mackenzie reflects on the peace movement after the Scottish referendum 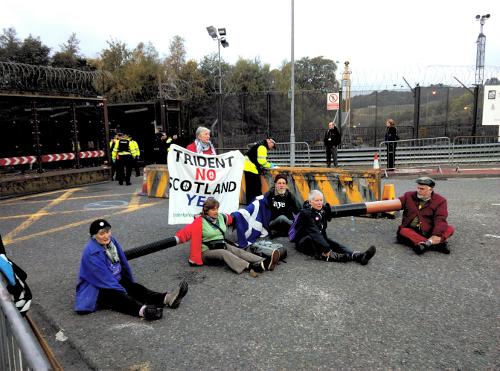 I got a lesson once in how to handle serious disappointment – one that I have never forgotten. It was 2001, and the Scottish high court had just pulled the rug from under a growing hope that Trident might be outlawed in the British courts. This was almost three years after sheriff Margaret Gimblett had famously acquitted the Maytime Three at their Greenock trial – on the basis that the defence had shown the illegality of the UK’s nuclear weapons.

When we came out of the court that day in Edinburgh, my fellow-campaigner Jane went up to the wall of St Giles Cathedral, put her head against it and wept for 10 minutes or so. Then she returned to our little group of shocked and angry activists with metaphorical sleeves rolled up. The campaign was subsequently resilient enough in the years that followed to make a significant contribution to the reality of a Scottish government with a firm anti-Trident stance.

As I write there are tears again. The possibility of an independent Scotland opened, by a large chink, the door to nuclear disarmament of the UK. That particular chink has firmly closed. But you don’t have to search far for the hopeful indicators.

I had two random conversations with folk in my village this week – neither of them as far as I could see ordinarily even remotely engaged with matters like war and Trident. Both spoke unprompted of how UK nukes were a key motivation in their ‘Yes’ vote. In Scotland, nuclear weapons literacy has increased hugely as a result of the independence campaign. This gain cannot be allowed to wither. It is also possible that the Scottish government will take advantage of its current little-to-lose situation by being less precious than it has been about the technicalities of the devolution settlement and being more confrontational about nuclear weapons. Again, there is work to be done.

Now the big question is: will we return to business as usual? That is a definite risk. Recall how the huge popular opposition to the second Iraq war dissipated almost overnight once UK soldiers were deployed. And yet, the level and quality of political engagement we have seen in recent months in Scotland is actually quite remarkable.

Perhaps the most important of these concepts is the bundle around nations and identity.

There is sweet irony in the fact that it has been those who have been ready to vote into being yet another nation-state who have wielded an eloquent critique of chauvinistic national self-interest and xenophobia. When ‘No’ voices mentioned the matter of turning family members in other parts of the UK into foreigners, there was a bewilderment that some folk still regard, in this interconnected world, some other people as foreigners.

Those apparently wishing to disconnect were in fact more connected than those wishing not to.

It would be wonderful if this little strand of understanding were to join the other strands of interconnectedness towards a world in which the idea of separate nation-states will wither away to nothing. And it was precisely this irony which caused a friend to say: ‘There I was, with 10 excited anarchists huddled outside a community centre... going to vote! It’s been a strange year.’

The persistent habit of many journalists to refer to all ‘Yes’ voters as nationalist has been especially grating, when a little professional effort would have shown them how diverse the movement for Yes has been. That diversity relates to the range of identities and solidarities that people hold, in sharp contrast to the focus of No campaigners on a bogus British-ness as the only solidarity to be considered, never mind solidarity with the poor, with women and LGBT in their struggle for equality, with neighbours in Europe and Scandinavia.

In Scotland, we have as a whole been unable till now to face up to the reality of severe poverty and inequality in our midst. While straightforward selfishness on the part of the relatively comfortable majority is part of the explanation, a half-formed conviction that nothing could be done has played its part.

The campaign for independence has begun to melt that indifference and inertia.

Lesley Riddoch’s Blossom, with its telling account of the poor and its concrete examples of what could and has been done, became one of the key texts of the movement.

We have to make sure this is more than a moment of awareness and power.

Where now for the nukes?

On the one hand, Trident is a concrete reality. From my window I can see the subs going up and down the Clyde estuary, carrying their foul cargo in the middle of ordinary water traffic. But it is also a powerful symbol of the Neighbourhood-Watch-gone-mad philosophy to which the British state is clinging ever more desperately – and which so many folk up here utterly reject.

The new realisation in Scotland of that reality and what it represents gives us another special moment. A moment for the deployment of our energy, experience, imagination and skills, including the gentle art of peaceful confrontation.

David Mackenzie is active in ‘Scrap Trident: Let Scotland lead the way to a nuclear-free world’.