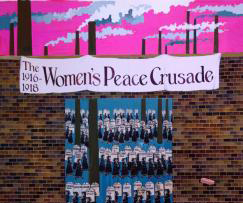 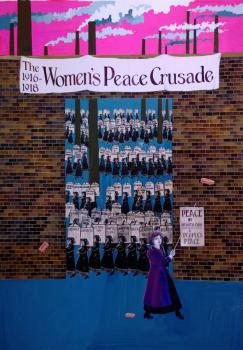 Denounced by the right-wing Morning Post as ‘one of the most active and pernicious propaganda organisations in the country’, its central demand was ‘a people’s peace’: a negotiated end to the war without annexations or ‘crushing indemnities’.

Born in Glasgow in 1916, by the end of 1918 it had 123 branches across the UK, from Aberdale to Ystradgynlais. 3,000 marched through Bradford; 300 marched in Birmingham (though their banner was torn up); and in Leicester a crowd of 3,000 assembled in the marketplace to listen to an all-women platform of speakers.

In Manchester, a planned WPC demo was banned and women hustled from Stevenson Square amid threats of violence, while in Nelson 1,200 Crusaders were met by a 15,000-strong patriotic mob baying for blood and hurling earth and clinkers.

Meanwhile, the National War Aims Committee (NWAC) – officially an NGO, in reality almost totally funded by the Treasury – was flooding the country with pro-war propaganda.

There were real possibilities for a negotiated peace in the winter of 1917 / 18, and Britain was a key obstacle to realising these, but the odds were heavily stacked against the Crusade. That it was nonetheless, in the words of Crusader Selina Cooper, ‘something heroic’ cannot be denied.

This poster is part of The World is My Country, PN's visual celebration of the people and movements who opposed the First World War. www.theworldismycountry.info