An African gathering of war resisters 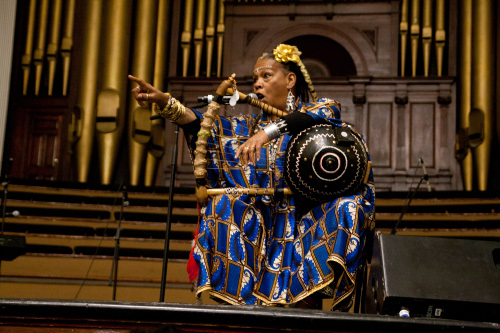 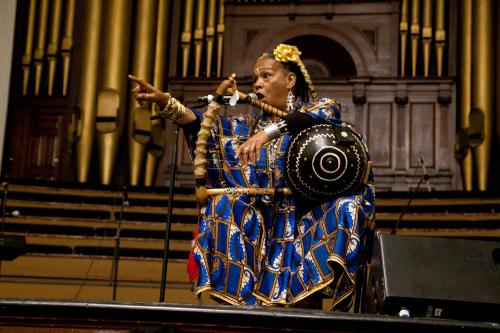 Speaking on the first day of a conference of grassroots antimilitarist campaigners, poet and indigenous Khoisan activist Zenzile Khoisan told us: ‘I was one of those people dodging bullets outside this building as a 13-year-old in 1976’. The building was the City Hall, an imposing colonial-era edifice on Cape Town’s grand parade.

Speaking 20 years after South Africa’s first democratic election, Khoisan told the War Resisters’ International (WRI) gathering stories of his investigations with the post-apartheid Truth and Reconciliation Commission – of ‘going to mortuaries continually’, and finding ways to cope. ‘This line from the Pablo Neruda poem kept me alive’, Zenzile said: ‘There is no clear light, no clear shadow, in remembering’.

The term ‘the continuum of violence’, which comes out of feminist analysis, draws attention to links between visible and traditional warfare and often-silent violence in everyday life – along with all the aggression and militarism that takes place in between.

What connects these harmful expressions of humanity? Many forces spring to mind: in Britain, the strong masculine hero protecting (/dominating) women is as potent in army recruitment as it is in the home. A hawker in Mogadishu without food can be driven to violence, whether in the guise of guerilla warfare, or frustrations meted out to competing businesses. Everywhere, soldiers face mental health repercussions of violent conflict.

Countering any form of violence effectively requires an awareness of this continuum. Our theme was ‘Small Actions, Big Movements: The Continuum of Nonviolence’, and the backbone of the conference was made up of daily theme groups, focusing on particular aspects of the continuum of violence and nonviolent responses to them.

The spirit of resistance

The opening night was joyous: a celebration of resistance, a night of inspiration and celebration, with actors, hiphop, and song. Jenni Williams of Women of Zimbabwe Arise and Desmond Tutu sharing the platform with Sahar Vardi (a woman conscientious objector from feminist group New Profile in Israel) and Omar Barghouti (of the Palestinian boycott, divestment and sanctions movement against Israel). Over four days together, we heard from struggles under-represented in international solidarity campaigns, including Western Sahara, the last territory under military occupation in Africa.

The conference hosted different forms of nonviolent expression, including the creative and theatrical. There were seven exhibitions, including a history of the End Conscription Campaign in South Africa, a photo essay on the cost of human development in India, a photovoice exhibition on marginalisation by South African women, and an arpillera patchwork exhibition.

The African Nonviolence and Peacebuilding Network, established at a WRI-run training in 2012, gathered in the days before the conference. The Women Peacemakers Program, affiliated to WRI, held their Global Consultation on Gender and Militarism just prior to the conference. The second edition of The Handbook for Nonviolent Campaigns was launched during the conference, with contributors from Zimbabwe, USA, Nepal and Britain speaking.

A Congolese participant asked: ‘Why are we in Cape Town, one of the most Westernised cities in Africa? Here the struggles are historical, but violent conflicts are raging in Africa now’.

The Ceasefire Campaign, a South African antimilitarist group, offered to be a practical and political partner for WRI organisers, and we were offered free space in Cape Town City Hall. More than that, civil resistance remains a live South African issue – including the methods used by activists in the Western Cape protesting poor service delivery, the so-called ‘poo protests’ – as campaigners challenge corporate power, and hold governments to account for promises made as apartheid crumbled.

WRI is no more or less than its members. Continued efforts must be made to ensure that, as a pacifist international network, we do not reproduce the violent relations between peoples, genders, and nations endemic in the rest of the world. We hope that new Congolese and other African members of WRI will bring their expertise and their experience to the network and maybe one day even host a conference.

Greater African participation than at any previous conference determined the content, the speakers – and the outcomes – of the Quadrennial.

These activists will shape WRI, and engagement in WRI will also influence their work, as it has for movements in Latin and North America, Europe, the Middle East and elsewhere for many decades.

Gathering as a network, we took the opportunity to say our own goodbye to WRI chair Howard Clark, who passed away suddenly last November. Howard was central to the planning of this conference, and its success was a testament to him: his contacts, ideas and determination, which also inspired us after he was gone.

Our new chair, Christine Schweitzer, was warmly endorsed by Howard before his death last year. She now has the job of overseeing WRI as it welcomes in African movements, and is changed by them.

As former chair Joanne Sheehan put it, with its flat top, WRI is a bit like Table Mountain, which dominates the Cape Town skyline – and this gives her more space and power to spread.

Hannah Brock is the Right to Refuse to Kill programme worker with War Resisters’ International in London: www.wri-irg.org