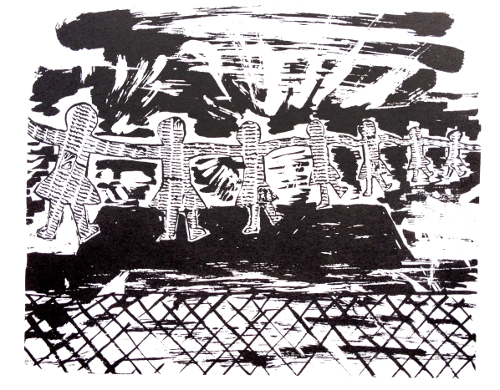 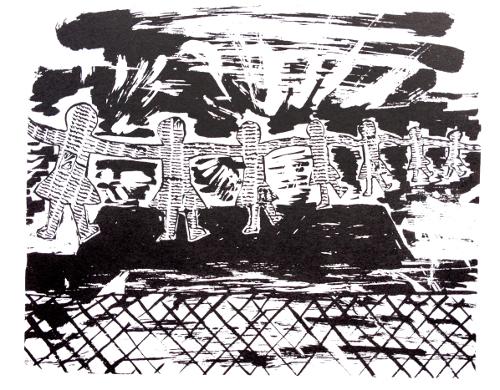 Everything looked so different, with trees and bushes grown taller, paths diverted and gates moved. I drove straight past Orange Gate where I had spent many weekends and holidays during the 1980s, sitting round the smoky camp fire, planning actions, cooking vegetable stews, singing songs, getting stoned.…

I finally found my way back to the gate, of which only a metal fence post remained, located in a different position, but with the faded remains of an orange labyris women’s sign still painted on it. Then the small pathway through the trees to where our fire pit had been, and where four other women had already gathered.

Four? This felt disappointing in terms of a reunion but as the day went on our numbers swelled to 15 or 16, some of whom I remembered from those heady days gone by, some of whom had come later than I (after I decided in my new role as a headteacher that I had to be more sensible and avoid trouble.) Some much younger women were the daughters and nieces of former Greenham Women, who had been brought along to help celebrate the part we had all played to rid the common of those hideous weapons of mass destruction.

After putting up tents and lighting a fire, we gathered around for a makeshift picnic and began our reminiscing.

It was a beautiful sunny afternoon and I wandered on to the common with a couple of old friends. We remembered the times when in order to access this piece of ‘common’ land, we had to use a combination of bolt-cutters and stealth.

It was both bizarre and very welcoming to observe families mountain-biking, people jogging, bird-watching and blackberrying on this land which had always been fenced, heavily guarded and forbidden.

As the evening drew nigh, we built up the fire and heated the vegetable curries and a tagine that one of the local women had cooked and brought from home. A giant birthday candle was lit and we all sang ‘Happy Birthday’ to Greenham to celebrate its 32nd birthday, and then the food was served.

With raita and dal and a fresh green salad, this was Greenham cooking with a difference! As dishes of sliced pineapple and mango were passed round, stories began to emerge about past actions, about the appalling treatment we had experienced from the police and the squaddies, grim prison episodes, the unfair judgements made by the press, and women we knew who had since died.

Then one of the women picked up her guitar and the singing began: witty songs about the camp and the actions, songs celebrating our womanhood and the power of peaceful protest. It was so evocative hearing the sound of women’s voices united in song once more. We listened for the nightingale that was a feature on these early autumn nights, but sadly it did not appear.

Some of us oldies, not feeling up to the harsh, cold ground, repaired to a nearby hotel whilst others bedded down in their tents and the embers of the fire finally lost their glow. The next morning we gathered again for breakfast, a new fire with the ever-boiling kettle, toast and croissants, fruit and coffee.

We talked about Syria, parliament’s decision not to allow Cameron to instruct the military to pitch in as Blair had done in Iraq, and about the US congress’s limited support for Obama to do the same.

How could we ignore the plight of women and children – now approaching two million refugees, as well as the hundreds of casualties? The only alternative seemed to be humanitarian aid, but at what potential cost to those attempting to supply it?

At about midday we put out the fire, stored the stones surrounding it in buckets of water and hid them for another occasion amongst the bushes, so they could not ignite a forest fire in this tinder-dry clearing.

Tents were taken down, rubbish cleared and all traces of our occupation removed. This little bit of Berkshire is still precious to us all. It is the place where we gathered 30 years ago in feminist solidarity, to plan creative and peaceful actions, make music and have fun, and many of us became politicised along the way about other issues and causes. Surely something to be celebrated.