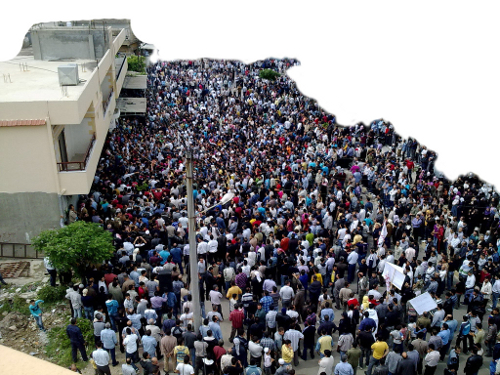 PN talks to Syrian activists inside the outside the country 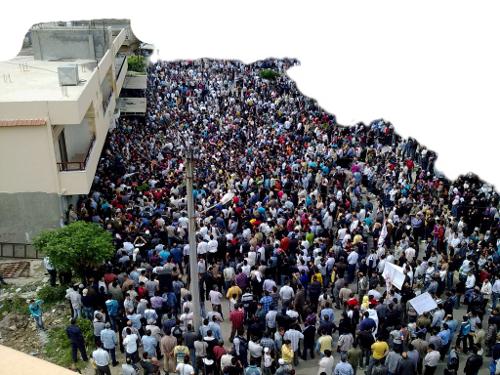 A demonstration in the city of Banyas, Syria on the 'day of rage' on 29 April 2011. Photo: Syria Frames of Freedom

Despite the civil war and the threat of US military intervention, the nonviolent movements that began the Syrian uprising continue to struggle for social change – and for a ceasefire.

‘Nonviolent civil resistance started this’, Mohja Kahf of the Syrian Non Violence Movement (SNVM) told PN. Kahf, who was born in Syria but grew up in the United States and is now an associate professor of Comparative Literature and Middle Eastern Studies at the University of Arkansas, went on: ‘What people don’t understand is that civil resistance isn’t just the Egyptian model of people filling up the square, but it’s also people building alternate networks, alternate economies… alternate media, alternate schools, the alternate hospital network.’

Solidarity activist Ewa Jasiewicz, who worked in Syria earlier this year, points to the value of the nonviolent movements helping to develop self-government in areas of Syria outside regime control: ‘It’s really important to support grassroots efforts, and self-determination and self-organisation on the ground, because that is the way to empower local Syrians who are already organising without a state, without a government, and creating their own form of democracy, and that’s really inspiring.’

No one will win
Mosab Khalaf, who grew up in countryside around Damascus, experienced the transition from nonviolence to armed struggle, and watched as many of his close friends took up arms. When nearly 90 per cent of the resistance in his home region became armed, he decided to leave for the city of Damascus, where he could continue his nonviolent activism. However, his decision to pursue unarmed resistance caused some rifts with his friends.

Khalaf is currently based in Damascus, working with an organisation called ‘Building the Syrian State’ (BSS), co-founded in September 2011 by Rim Turkmani, a Syrian-born astrophysicist at Imperial College in London.

BSS, which has a media centre and organises civilian activities like leadership workshops, is committed to nonviolent struggle and opposes foreign intervention. The group has allowed Khalaf to ‘continue my work, to reach my target from the beginning of the revolution, in a good way, in a more effective way, in a more political field.’.

‘I love my home, my country, because I know that there’s no place in the whole world where I would be comfortable in and welcome in except this place’, Khalaf said. He sees a place for nations like Russia, Britain and the US in resolving the conflict – though not in the form of supplying arms or conducting air strikes. ‘They can stop the fighting,’ Khalaf said. ‘Take us to Geneva [where a second round of peace talks between the Assad regime and the opposition may take place], to a political conversation, to the political field. Stop this war.’

Mohja Kahf’s hope is that the entire grassroots peace movement will mobilise in the US and offer support to the Syrian grassroots movements in rebuilding their country and creating their own democracy. She recently developed a video project calling for the release of activists imprisoned in Syria, which has been endorsed by 18 Syrian groups and the Fellowship of Reconciliation US.

Amid the armed revolutionary efforts, grassroots activists within and outside Syria continue to find new ways to share information.

Activist Omar Al Assil recently worked with fellow members of the SNVM to create an interactive map of all the revolutionary actions taking place across Syria. The map uses an algorithm to display the relationships between the actions.

Al Assil told Amnesty International UK that it was created mainly ‘to motivate people, and the other aim is to document all these activities so interested people can have access to it easily.’

Even as grassroots groups continue their nonviolent pursuits, there is conversation among everyone from global political leaders to refugees and revolutionists about other nations getting involved in the conflict.

‘They of course have a role. It’s not a choice for us because they are kind of controlling all this war,’ Khalaf said. ‘Russia, for example, controlling the regime; America is controlling the protests and other militias.’

But with all the armed battles in Syria, many who are in Syria don’t see room for discussion until the fighting stops. ‘How can I communicate with [an] armed person?’ Khalaf wondered. ‘It’s not logical. If you are with the regime, I cannot talk to you. Maybe I can understand you. Maybe you understand me, but when [there is] armed resistance, there’s no talking anymore. I can’t talk with an armed person.’

While activists and Syrians have varied opinions about international intervention, most agree that the key actors in the UN security council can do some good – though not in the form of military strikes.

‘The moment you start to bring in armed intervention in the form of bombardment, in the form of a war, you immediately create the conditions for much more escalated levels of violence’.

The SNVM was formed by young Syrians in November 2011.

On their website, they say: ‘We believe that non-violence is a complete reform process and our work is not to achieve interim goals but rather is a continuous movement to change the society. It won’t reach its ends by toppling a regime or a president but by reaching a critical mass in the Syrian society that acknowledges the need for change and its means, and contributes in moving the society towards a new reality of consciousness, freedom and pluralism.

‘We stick to the non-violence principles in our thoughts and execution and we believe in the necessity to shoulder the civic and historic responsibility of the reality of injustice in the society, and in pushing towards making the human being an active, and not reactive, engine of change.

‘We do not have any political aspirations and we do not pretend to represent the Syrian people.

‘We are not part [of] and we do not support any activity based on foreign intervention.’

Jessica Corbett is a US student journalist working in London with PN.