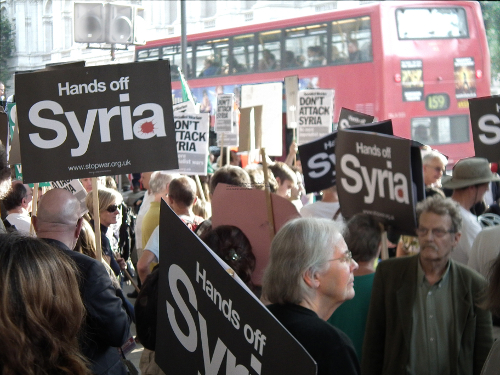 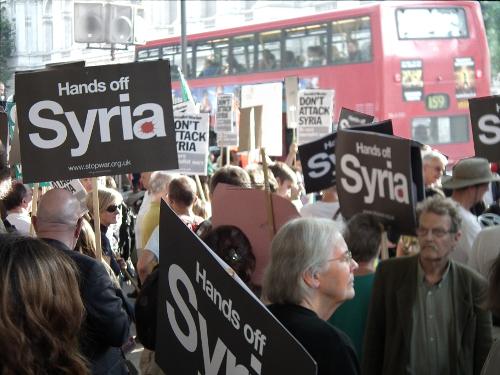 On 14 September, instead of launching air strikes on Damascus, US president Barack Obama was forced to agree to a Russian plan for disarming Syria’s chemical weapons under the supervision of a UN agency, the organisation for the prohibition of chemical weapons (OPCW). The resolution of the Syrian chemical weapons crisis by diplomacy was a triumph for what the New York Times in 2003 called the ‘second superpower’ – ‘world public opinion’ – much to the disgust of right-wingers and the Israeli government, who feared the impact on US policy towards Iran.

On 29 August, British politicians had bowed to the anti-war sentiments of the British people, and the house of commons refused to support a government motion endorsing immediate air strikes on Syria.

Undermined by the British vote and facing a tidal wave of opposition, Obama was forced to give congress a vote on his planned strikes. Then, as independent US broadcaster Amy Goodman of Democracy Now! put it, ‘The American people stood up for peace and, for once, the politicians listened.’

Public opposition
In Britain, opinion actually hardened against military action in the 24 hours running up to the commons vote – with support dropping from 25 to 22 per cent, according to YouGov (opposition went up from 50 to 51 per cent.)

A Vision Critical poll for the right-wing Daily Express found that only 8 per cent of Britons supported immediate strikes. The rest were divided almost equally between those who opposed strikes under any circumstances (41 per cent) and those who required UN confirmation of the chemical attack, and security council approval for military action (39 per cent).

There was nearly as much opposition in the US. A YouGov poll for the Huffington Post published on 28 August showed a support for military action at 25 per cent, with 41 per cent opposition. An NBC News poll two days later showed 80 per cent of US citizens wanted the president to ask for congressional approval before launching strikes, a commitment he was forced to give.

Congress indicated that it was unconvinced by Obama’s arguments, and the president had to retreat from a congressional vote. US academic Noam Chomsky described the Russian plan to disarm Syria through the OPCW as ‘a godsend for Obama’, saving him from ‘what would look like a very serious political defeat’.

Superpower retreat
After the White House agreed to the Russian proposal, right-wing US broadcaster Glenn Beck opened his radio show saying ‘This is the week that America lost its superpower status.’ Slightly more soberly, The Economist’s Lexington column described the US as a ‘superpower on strike’.

Right-wing TV network Fox News was told by a ‘former Israeli diplomat who has spent considerable time in the United States and enjoys close ties to the Netanyahu government’ that ‘this is not the way a superpower should act.’

Senior Israeli journalist Ari Shavit wrote in Haaretz that ‘the United States has lost its imperial passion’. While still the strongest country in the world, the US was ‘suffering from battle fatigue and psychological exhaustion’ from the ‘unnecessary wars in Iraq and Afghanistan’. His conclusion? ‘The United States is no longer prepared to pay the price of being the world’s emperor.’

Our conclusion: the power of the people is super!