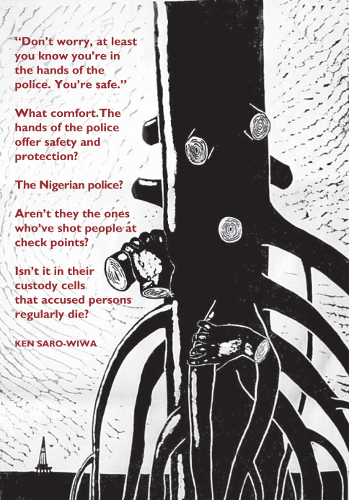 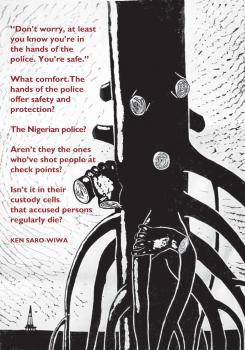 On 10 November 1995, Ken Saro-Wiwa and eight of his colleagues were hanged by the Nigerian military government for campaigning against the devastation of their homeland in the Niger Delta by oil companies, Shell in particular. Ken was an activist, writer, political journalist and businessman and became the iconic leader of the minority Ogoni people’s struggle for environmental and social justice in Nigeria. Inspired by Martin Luther King jnr and the civil rights movement in the US, he was committed to a nonviolent campaign. His execution provoked international outrage and resulted in Nigeria’s suspension from the Commonwealth of Nations for over three years.

‘This linocut was one of a series made in 2005 to commemorate the life of Ken Saro-Wiwa. I took the texts from his writings, including the anti-war novel Sozaboy: A Novel in Rotten English. In the picture I have put a Delta mangrove tree, its limbs sliced to make way for oil exploitation.’