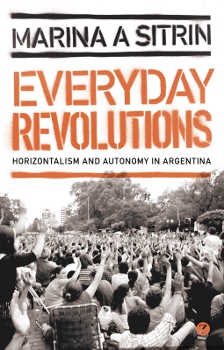 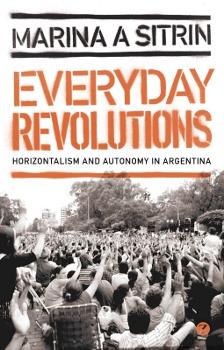 This book explores the revolutionary politics and activism that sprang up in Argentina in December 2001. With the state collapsing in the midst of a severe economic crisis, sections of the population responded by organising demonstrations and neighbourhood assemblies.

In the months and years following this societal rupture, workers began to occupy their workplaces and alternative media outlets and extensive barter networks were established. The local assemblies were expanded, often encompassing a huge range of social and economic services. Underpinning and energising this grassroots activism were concepts such as autonomy, participatory democracy and a wholesale redefinition of power.

‘This was perhaps the most extraordinary radical political event I’ve ever witnessed: ordinary people discussing self-management, understanding direct democracy and putting it into practice’, noted one British writer about the neighbourhood assemblies.

Marina Sitrin, who holds a PhD in Global Sociology, moved to Argentina soon after the protests began, becoming both participant and academic observer – a difficult and sometimes contradictory position that meant she wrote what she calls ‘militant research.’

Unfortunately the extraordinary subject matter is rarely captured by Sitrin’s very dry, academic prose. No doubt her focus on strategy and theory will be of interest to those looking to organise effectively in their own struggles. However, this specialist outlook means the book holds little attraction for the general reader.

For example, a wider knowledge of progressive activism is often assumed and there is often a frustrating lack of context. So while the 270 recuperated workplaces that have been established since 2001 are impressive in their own right, what does it mean in a nation of around 40 million people? The level of influence these occupied workplaces have on wider Argentinian society is never discussed. A map of Argentina and a list of abbreviations – many of which are in Spanish – would have been useful too.

The book ends with an interesting discussion of what constitutes success for a social movement, with Sitrin highlighting its influence on the worldwide street protests of 2011. Indeed, a movement which has inspired so many deserves an inspiring book to be written about it. But as comprehensive and insightful as Everyday Revolutions is, this is not such a book.

Instead, those looking for a rousing and accessible account of Argentina’s recent radical ferment should watch Avi Lewis’s and Naomi Klein’s documentary The Take (available on YouTube).