Reverend Billy, The End of the World 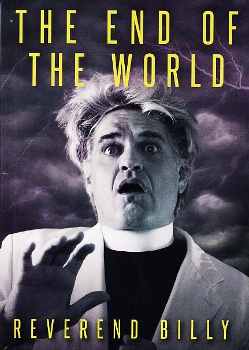 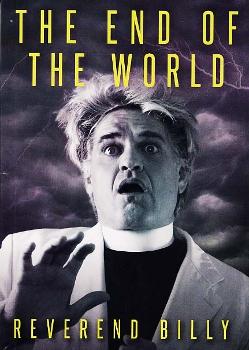 Since creating the post-religious Church of Stop Shopping in 1999, the Reverend Billy has held services in churches, community centres, forests, fields, parking lots, shopping malls and – above all – inside brand-name stores across the US and Europe, preaching against consumerism, and for economic and ecological justice.

The creation of actor Bill Talen, the Reverend Billy is a televangelist-style preacher with Elvis hair whose antics were considered sufficiently threatening that Starbucks once issued a memo to its employees explaining how to deal with him (‘What should I do if Reverend Billy is in my store?’). Friends who have taken part in his actions tell me that they were among the most moving activist experiences they’ve ever had.

A genre-defying (and beautifully designed) blend of words and pictures – part sermon, part personal narrative, part surreal fantasy, its brief 118 pages contain 33 images, ranging from a horse’s eye and a slice of pumpkin pie to a decoration from Newton’s Principia – Talen’s latest book attempts to share his ‘personal work at making an Earthy religion’ in response to our environmental crises, the biggest of which, of course, is climate change.

‘You can say one thing about the humans’, he observes: ‘we were a species that scribbled, texted, hologrammed, and burst a blood vessel of pixels in the final years of modern life.... Of the six known mass extinctions on Earth, this was the self-conscious one, produced and consumed in high-def, broad color with advanced compression algorithms.’

He adds: ‘It was a distraction, as The End of the World approached, that there were still such great sales.’

Quoting a recent scientific article* warning that ‘the global ecosystem ... is approaching a planetary-scale critical transition as a result of human influence’, Talen observes that when ‘this kind of scary study... pops up in newspapers as a little squib on page 8’, ‘I always look for the sentence that calms me down, something along the lines of “Sea-rise, population pressures and mass migrations from coastal cities will peak by the end of the century.” It’s that first phrase that I look for, with its promise to hold off destruction till 2100. That 80-or-90-year gift would give Lena [his 2-year-old daughter] a life.’

Politically savvy, he is also explicit about the role of militarism, his blunt assertion that ‘war is crucial to consumerism’ echoing New York Times columnist Thomas Friedman’s infamous observation that ‘The hidden hand of the market will never work without a hidden fist. McDonald’s cannot flourish without McDonnell Douglas, the designer of the F-15.’

Nonetheless, Talen’s fundamental message – and it is one that he practices as well as preaches – is a positive one: a call to (re)create community and take on the powers that be, nonviolently.

‘People making community is a clarifying drama,’ he writes, reflecting on his experiences holding a Thanksgiving dinner in the lobby of the Bank of America with a recently-evicted victim of foreclosure. It is ‘a surprising prosecution of the lie that their spaces are just like our spaces and how we act in their spaces is the natural way to act in all spaces. The gravity and intensity of actual living has the effect of revealing their theft of our lives.’

Moreover, ‘The End of the World insists that we stop shopping, stop banking, stop bombing – stop living in those little squares of time and space that make Consumerism run. The End of the World is giving us a few more minutes to confront the manufacturers of this over-arching con-job, the big bankers and the CEOs.’