Melissa Aronczyk and Maria I. Espinoza, A Strategic Nature: Public Relations And The Politics of American Environmentalism 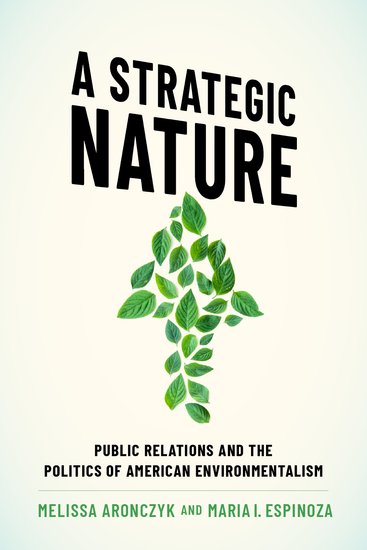 ‘We seem trapped in a world where fossil fuel producers and financiers have humanity by the throat,’ UN Secretary-General Antonio Guterres stated in June. ‘For decades, many in the fossil fuel industry have invested heavily in pseudo-science and public relations — with a false narrative to minimise their responsibility for climate change and undermine ambitious climate policies.’

Written by two Rutgers University academics A Strategic Nature explores the relationship between American public relations (PR) and American environmentalism, arguing that they emerged alongside each other, and that neither would look the way they do today without the other.

Buttressed by Oxford University Press-level referencing, they claim that ‘it is not possible to understand the role of the environment in our everyday lives without understanding how something called “the environment” has been invented and communicated’ by PR.

If it isn’t clear already, the book is very much an academic take on the topic, often quite dry and not a particularly easy read.

However, it contains some useful information for activists.

If measured by the scale of the response from corporate PR, it can be argued that US green activism has been very successful. For example, the authors highlight the campaign to discredit Rachel Carson after she published Silent Spring, her broadside against pesticides, in 1962. Elsewhere they note the upsurge in environmental activism in the 60s and 70s ‘represented the greatest challenge to business… perhaps of the entire twentieth century’, and sparked a huge, highly sophisticated PR campaign to counter it.

Starting with the ‘father of the US national parks’ John Muir, they also note how both big business and environmentalists have used public relations to further their cause.

Indeed, in the UK activist groups such as the 2000s anti-airport expansion Plane Stupid, Extinction Rebellion and Greenpeace are undoubtedly all highly -skilled PR practitioners. The difference, of course, is though business PR practitioners tend to frame their work as informing public debate, Aronczyk and Espinoza conclude that ‘the true measure’ of a successful corporate public relations campaign ‘is the extent to which it has ensured that publics do not form, do not constitute a body of concern and do not raise problems as public problems.’

While the book is largely concerned with twentieth century history, the battle between corporate power and a liveable planet will likely be the key focus of activist work for the foreseeable future.

An up to date, UK-specific book on corporate PR and green activism would therefore be very welcome.

Until then, concerned citizens will likely find the following books more useful: A Century of Spin: How Public Relations Became the Cutting Edge of Corporate Power (2007) by David Miller and William Dinan, and Sharon Beder’s Global Spin: The Corporate Assault on Environmentalism, updated in 2002.