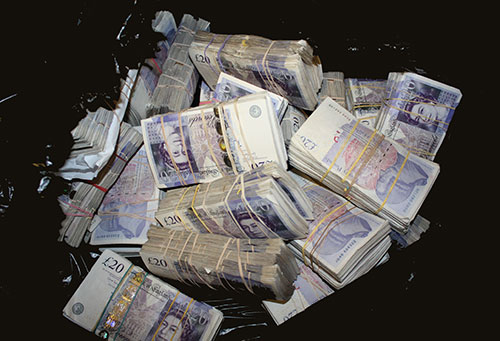 The £55bn ‘fiscal black hole’ is not a real thing

Joan Robinson, the great economist, once wrote: ‘The purpose of studying economics is not to acquire a set of ready-made answers to economic questions, but to learn how to avoid being deceived by economists.’

British politics in recent months has all been about ‘the fiscal hole’, said to be a gigantic £55bn gap in the government’s finances. Journalists and politicians talk about it as though it is a real thing.

The ‘fiscal hole’ sounds like it’s a £55bn gap between the government’s expenditure and its income.

It’s much more complicated and ghostly than that.

Talking about the ‘fiscal hole’ distracts attention from the fact that the ‘hole’ is really about what the financial markets demand from the government.

The £55bn figure that Labour leader Keir Starmer has now disastrously accepted as real is actually an artificial calculation. It’s based on the government’s financial goal (or ‘fiscal rule’) for national debt to be falling – in five year’s time – as a proportion of national income (also known as ‘GDP’).

She promises that her debts will be significantly smaller in five years’ time, relative to her income – and falling.

Her Big Goal, therefore, is for her debts in five years’ time to be significantly less than 10 percent of the income she will be getting then.

Let’s say a financial expert calculates that Alex won’t meet her Big Goal, on the basis of what they know about her, and about her family and employment situation, and about the wider economy.

They predict that Alex’s income might rise in five years to £34,000 but (partly because she’s financially supporting family members) her debts are likely to have risen to £5,000.

This does not mean that Alex has a £17,000 crisis in her finances today which requires her to immediately go onto a permanent beans-and-toast diet.

Nurses today do face very real financial problems (which is why they are very justifiably taking strike action) but it’s not because of weird forecasts, rules and projections like these.

It is an imaginary future number produced (a) by a goal that she decided to set herself and (b) by predictions about what will happen over the next five years.

Both numbers are about what could happen in five years’ time if you commit yourself to a particular arbitrary goal.

Dharshini David, the BBC economics correspondent, has described the ‘fiscal hole’ like this: ‘It’s the extra money the government needs to find to meet that self-imposed target in the future’.

There isn’t a £55bn gap in the government’s finances right now, so why was it so urgent to put together an Austerity 2.0 budget in November?

‘Rishi Sunak insists painful tax rises are necessary because it’s what the markets expect.’ That was the headline of an article written by Anushka Asthana, ITV’s deputy political editor, on 13 November, in the run-up to the government’s November budget (officially ‘the autumn statement’).

The British prime minister told reporters that day: ‘The chancellor has said that we will [support the vulnerable in society] crucially [while] delivering on the expectations of international markets, especially to make sure that our fiscal position is on a more sustainable trajectory’ (emphasis added).

What does this mean?

Let’s go back to Alex. Imagine that Alex has a weird overdraft, where she can borrow as much as she likes from her bank, for as long as she likes – but the interest rate can also go as high as the bank likes, it varies wildly each time she borrows some money.

This is sort of like how the government borrows money from the international financial markets by issuing ‘bonds’ or IOUs.

What if Alex’s bank manager came to her and said: ‘The rate on your overdraft is already going up. I’ve heard about your five-year personal finance goal, and I’d like to see details of how you aim to achieve it.

‘If you don’t actually have a plan, or if your plan doesn’t look sound, I will have to conclude that you’re not as reliable as I thought you were – and I will be forced to increase your overdraft interest rate sky high.’

This is sort of like what happened with the international financial markets when the then prime minister Liz Truss and her chancellor Kwasi Kwarteng announced £45bn worth of tax cuts without similar cuts in public spending.

The lack of any financial plan in their ‘mini-budget’ frightened international investors, who started charging much, much more for the money they lent to the government. This sparked the crisis that brought Truss down.

Dharshini David, the BBC economics correspondent we already quoted, summed things up this way: the lesson of the Truss/Kwarteng ‘mini-budget’ was that ‘ignoring a black hole is costly when you’re looking to financial markets for funding’ (emphasis added).

Projected (and somewhat imaginary) ‘fiscal holes’ aren’t that important in themselves, but they are extremely important if investors think that the government doesn’t have a sensible plan for managing its finances and meeting its own targets.

Economists at the Progressive Economy Forum have pointed out that ‘small changes in forecasts for future interest rates and growth, and what is counted as government debt, dramatically alter the size of the apparent “hole” in the public finances’.

For example, the ‘fiscal hole’ would completely disappear, they wrote, if the accountancy rules used to measure national debt were put back to what they were before autumn 2021. Government debt would be ‘back on a sustainable footing with £64bn headroom to spare’ (emphasis added).

Rob Calvert Jump and Jo Michell also pointed out that ‘many countries have spent many years with substantially higher debt-to-GDP ratios than that of the UK without problems.’

The way the ‘fiscal hole’ is discussed makes it seem as if the five-year national debt/GDP fiscal rule has existed forever, an iron law which must be obeyed. In fact, the current national debt goal was announced in 2019 as a three-year rule. The Institute for Fiscal Studies has pointed out that 12 fiscal rules were put forward between 1997 and 2016 – 10 were broken or abandoned.

We must not let made-up financial myths justify class war economics that bring misery to millions of families. We must not let ourselves be deceived by economists, journalists or politicians.

Milan Rai has an under-used degree in economics.