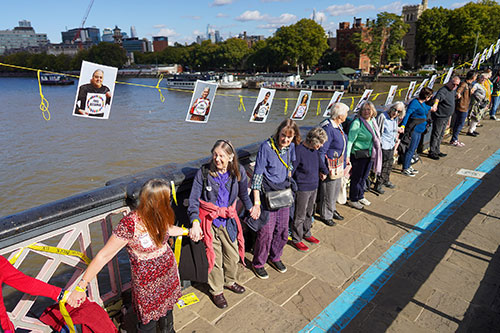 Lambeth Bridge, London, 8 October: some of the Julian Assange supporters who formed a human chain around the Houses of Parliament. PHOTO: ALISDARE HICKSON VIA WIKIMEDIA COMMONS (CC BY-SA 2.0)

Thousands of people came to London from across the UK and around the world on 8 October to create a human chain around the Houses of Parliament, calling for WikiLeaks founder Julian Assange to be freed.

The demonstration was called by Don’t Extradite Assange (DEA), which campaigns for freedom for Julian Assange, currently in Belmarsh Prison awaiting extradition to the US to face conspiracy charges for publishing secret documents revealing US war crimes in Afganistan and Iraq.

From parliament, the human chain ran across Lambeth Bridge, along the opposite side of the Thames, and back over Westminster Bridge.

People passing round the outside of the chain included Assange’s wife Stella Moris, and a German man, Kolja, who had walked all the way from Hamburg, Germany (starting on 2 July), carrying a supportive placard.

We were supposed to hear a blast to tell us when to start holding hands and when to stop but, where I was standing, no such sounds could be heard. Some people started to join hands at one point, but many people seemed too embarrassed to complete the chain.

Lambeth Bridge, London, 8 October: some of the Julian Assange supporters who formed a human chain around the Houses of Parliament. PHOTO: ALISDARE HICKSON VIA WIKIMEDIA COMMONS (CC BY-SA 2.0)

Don’t Extradite Assange is asking supporters to write to their local papers, asking editors to go on the record and say ‘publishing is not a crime’, after the 28 November Open Letter from the Der Spiegel, El Pais, the Guardian, Le Monde and the New York Times. More info: www.tinyurl.com/peacenews3855

You can also write to Julian in prison (letters, not postcards, DEA advises): Mr Julian Assange, Prisoner #A9379AY, HMP Belmarsh, Western Way, London SE28 0EB. Remember to put your own name and address on the back of the envelope. If you’d like a reply, please enclose a stamped self-addressed envelope. The most helpful thing may be to tell Julian what actions you’ve taken to support him.