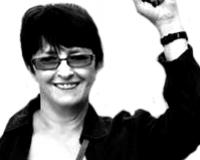 One of the ‘pleasures’ of the Peace News office location is Caledonian Road. Right at the junction with Pentonville Road at Kings Cross. So, busy. We’re right by the lights. Among the regularly-heard sounds is ‘this vehicle is turning left’ (to warn cyclists who might think it a good idea to undertake – overttake on the left at the lights).

On 10 November there was a Tube strike, so everybody who has a car decided to get in it and drive into central London. And, just to make sure everyone in the locality knows they’re there, they toot, honk, whatever you call it. A cacophony of horns tooting, sounding like that bit in Gershwin’s An American in Paris. One beeps, another beeps in response, and so it goes.

Why do they do this? And, as I suspect, are they all men? Or most of them?

It’s been noticed how some men need to take up as much physical room as possible, far more than actually needed (aka ‘manspreading’, we’ve all seen it). I am wondering if making as much noise as possible is also a Man Thing.

I’ll give you an example. A family across the road from me has a child (a boy) with a junior quad bike. He likes to ride it up and down outside the garages. It’s probably not completely legal but I am not sure if the access road to the garages is actually a public highway.

Anyway, it makes a noise. And the adults in the family, the male ones, love riding it up and down too. And round the neighbouring streets too.

Not only does it make a noise like someone using a grasscutter on the estate, it also releases a fair amount of smelly fumes. But it’s the noise which annoys most (there’s a song by The Buzzcocks: ‘Noise Annoys’. It certainly does.)

One of the neighbours has a motorbike which seems to make more noise than strictly necessary. My daughter’s a biker and she doesn’t make that much noise. In fact, she often comments that the noise sounds like the bike is ‘unwell’. Or maybe it’s just the rider.

Then there’s fireworks. I know loads of people love them. I don’t mind the pretty ones up in the sky to which everyone goes ‘ooh’ and ‘ahhh’. It’s the ones that sound like you’re in a war zone.

When these go off around 5 November, the users are probably not all men. Just the ones who set them off during the daytime (proof if it’s needed that it’s not about the ‘oooh’ factor, more ‘listen to that big bang’). Man down the road from me set one off while standing on his doorstep. He saw me flinch. And laughed.

Those who set one off in Wood Green High Road (it went off horizontally, along the pavement) were definitely not female. Then they all ran off laughing.

It’s my observation that the loudest voices in a room are nearly always male. Some men just like to establish a presence… and they do this by being loud and making a noise. It’s true, Google it.

I am not sure why but my (male) partner is unable to leave the bathroom without dropping the toilet lid (hey, at least he doesn’t leave the seat up, he’s been trained!) and crashing (sounds like crashing) through the door. So much noise. Weird because he’s so softly-spoken.

Perhaps I am suffering from misophonia. This is an actual medical term used to diagnose people who are psychologically or emotionally triggered by sounds.

Well, I know this is a problem for me since the sound of a sparkling wine cork being extracted makes me leave the room. OK, I go back in when the wine is poured out, I’m not daft!

Balloons being popped have always freaked me out since I was a child. I have a photo of myself and my younger sister at a children’s Christmas party. She’s happily opening a present, I am sitting with my arms wrapped round my head so as to reduce the noise of the constant balloon-bursting. I guess, for some, that’s the whole point of a balloon – to burst it.

So, maybe the problem is with me and not men constantly making too much noise? I’m working on reducing the stress caused by noise.

In the meantime, please keep it down. And ban fireworks which are designed to just make a loud bang. The UK wildlife, pets, and me, will thank you for it.