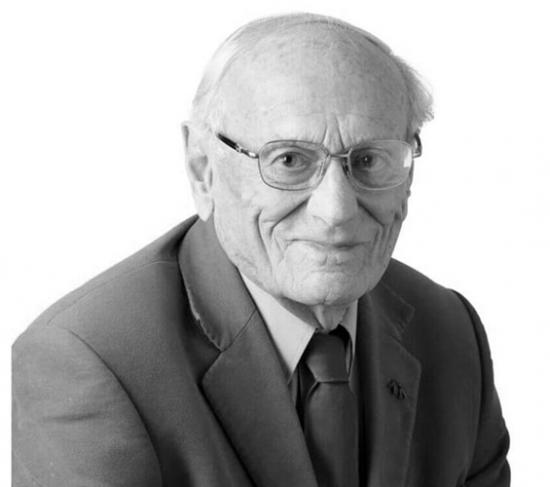 In October 2014, Second World War conscientious objector Godric Bader was awarded the Gandhi Foundation’s International Peace Award, in recognition of the alternative business model he and his family created for their industrial manufacturing company, the Scott Bader Commonwealth.

Scott Bader has been and continues to be a successful industrial manufacturing company. Being owned by its workers did not stop it reaching sales of £270mn in 2021 (with gross profits of £76mn).

Godric was managing director of Scott Bader from 1957 – 1971 and chair of the company from 1966 – 1989. The company wrote in its tribute to him: ‘It was through his tenure in [these] key positions within the company... [that] Godric guided and evolved this innovative employee-owned business model over the years.’

At the Gandhi Foundation awards ceremony at the House of Lords in 2014, Godric said: ‘I am delighted that the Commonwealth is being acknowledged as a living, working, example, for nearly 70 years, of a struggle to build and demonstrate a viable basis for making a truly democratic and worthwhile working life.

‘Whether in our lab, factory or office, it is our endeavour to live out the 1651 words of [Quaker founder] George Fox: “To live in the virtue of that life and power that takes away the occasion of all wars”.’

A few years earlier, in April 2011, on the 60th anniversary of the Scott Bader Commonwealth, Godric described the thinking that led his father to transform the chemicals company he had founded into a trust owned by the workers: ‘After the Second World War, we were joined by new people, some from the forces, all agreeing “Never again!” We felt strongly that the roots of violence must be removed from the world. We felt that just saying “No” to war was not enough. The unhealthy growth of greed and selfishness in the business world was developing. We wished to work for peace not only between countries, but in relationships between all people, personally, face to face, especially within the workplace. People earning their living decently and building wealth in common on a firm basis together.’

Ernest Bader had formed his chemicals firm (‘Scott’ was his wife’s surname before marrying him) in 1921. Exactly 30 years later, Ernest (with Godric’s support) gave 90 percent of the ownership of the company as a free gift to the workers, in the form of a charitable trust or ‘commonwealth’. (The other 10 percent was handed over in 1963.)

Godric wrote later about his father’s decision: ‘Bader had become a Quaker and, as a contribution to making a less violent world, stimulated by the influence of Gandhian nonviolence, he and his family gifted the company into a Trusteeship in 1951, forming a cooperative common-ownership company.’

Godric saw Gandhi’s influence in these words in the preamble to the Scott Bader constitution: ‘We must ask ourselves to what extent violence resides in the demands we make upon the earth’s resources by reason of our self-indulgent existence, and what is to be our own personal contribution to the realization of peace.’

The constitution to this day calls on the Scott Bader board to ‘limit as far as possible the products of the Scott Bader Group to those beneficial to human beings, and exclude products for the specific purposes of manufacturing weapons of war’.

In an interview with Northamptonshire Quakers in 2009, Godric said that his father saw the traditional authoritarian, investor-controlled capitalist structure as driving towards war, resulting ‘in the need for the protection from a military background to protect the wealth of the capitalist elements which had created and fought for freedom to be able to build themselves up and have important power in the world’.

The unifying of labour with capital in the Commonwealth or Trustee structure helps to create the conditions for peace, in Godric’s view, moving from an ‘ownership’ way of seeing things to ‘responsibility for assets’. He once wrote: ‘Trusteeship can provide a way to avoid not just violence between humans but also between humans and their environment, and has to be the ethic for the next century.’

Godric was born in Stanford-le-Hope, Essex, east of London, and was sent to a Quaker school: Friends’ School, Saffron Walden, less than 50 miles away.

During the Second World War, the family home was on the flight path into East London. Houses on his road were destroyed by explosives dumped by German bombers. A shell from an anti-aircraft gun came through the roof of his house.

Godric was called up, and applied to be a CO: ‘I thought that I would be a conscientious objector because it was against the teaching of Christ, it was not Christian to kill your fellow men.’ After a period of hard work on the land, as a CO, Godric applied to the Friends Ambulance Unit (FAU), a Quaker medical project.

To get into the FAU, there was a tough medical exam: ‘I remember the doctor made you put your hands on the back of a chair and jump up onto the seat of the chair 20 times! To see how you could do that; and then they would listen to your heart.... I think they probably gave COs a more severe one... because these COs must be a weak-kneed, cowardly lot!’ Godric served as a medical orderly in Oxford.

After the war, Godric joined Scott Bader, travelling to the US ‘to get background and experience which included being blown up in a polymer explosion, so much so the whole plant was destroyed!’

In terms of peace work, Godric was involved in the first wave of the Campaign for Nuclear Disarmament (CND). He was active in his local CND group in Northamptonshire, campaigning against the deployment of intermediate-range Thor missiles (with US nuclear warheads) at three local airbases – Harrington, Luffenham and Polebrook – until they were withdrawn in 1963.

Godric also went on the Aldermaston Marches, starting with the second march (the first to be organised by the newly-formed CND).

In later years, Godric was a generous supporter of many peace movement groups including CND, Pugwash and Peace News.

Speaking to Northamptonshire Quakers in 2009, Godric expressed sadness at the ‘fractured’ state of the peace movement, partly the result, he believed of the failure of the anti-Iraq War movement of 2003.

He also expressed support for civil disobedience like that of the Committee of 100 in the 1960s (which his father was part of): ‘I think it’s rather sad that they [the anti-war movements] can’t make a broader front and have some of the guts that were shown originally, actually to sit down in Whitehall. There should be that number now that we could block off the offices that are concerned, the one in Whitehall that’s concerned with war, the War Department or whatever it is. But you don’t see that blockaded. I know that seems a bit extreme, and I don’t know that I could do it, but I would still like to be involved in that kind of an activity. Even though we would risk – conceivably would risk – breaking the law and it would result in prison or other problems.’

Godric Bader is survived by his second wife, Anne Atkinson-Clark; his daughter, Hansi Manning; and his grandson, Harry.