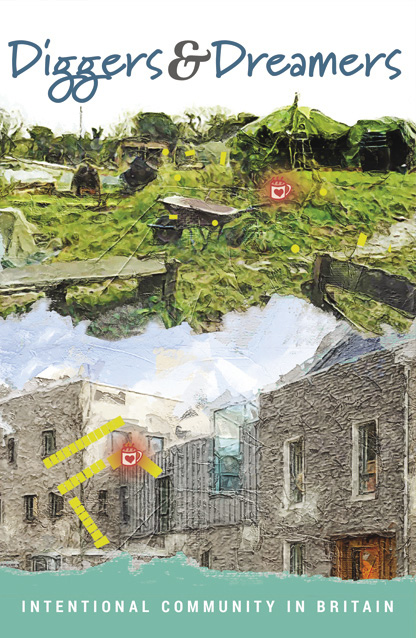 The Diggers & Dreamers (D&D) editorial collective has changed membership over the years, but the format of its definitive guide to intentional community in Britain hasn’t. The 12th edition (2021) does not disappoint as the go-to source of information for those seeking a more fulfilling alternative to the nuclear family, to precarious renting or to dedicating one’s waking hours to wage slavery for a mortgage.

Having migrated online, the print version is now only issued every few years – the last one was the 25th anniversary edition in 2015.

When D&D arrives at our co-op, it’s a source of surprise, as half the members haven’t heard of it. People’s first instinct is to turn to our entry to see how it’s come out, then look for other Radical Routes member co-ops, and then start looking at the incredible variety of other kinds of communities.

Since the demise of the Communes Network (of which D&D and a volleyball tournament are the last vestiges), arrivals into the world of intentional community are often completely unaware of all the other communities and can remain so for years – so much for the internet facilitating social networks.

The directory itself is roughly half of Diggers & Dreamers. It aims to provide as many signposts as possible to those wishing to join or start a community, including:

But the first half of the book is where the juice is, with articles covering technical, analytical, philosophical, inspirational and just beautiful aspects of community.

Kirsten Stevens-Wood’s research, which attempts to discover whether there’s a magic formula for making community, gets the book off to a good start. And, while (spoiler alert) it partly concludes that there isn’t, it does give a helpful overview of the various obstacles that need overcoming and some strategies for how to do that.

Several other articles also report on individual research: a photographic record from life in Bruderhof Christian communities across the world provides a contemplative and in-depth exploration of long-term (and very similar) communities. It contrasts with my own helter-skelter rush around the world, which is more like standing somewhere high and pointing at landmarks.

And that contrasts again with an in-depth comparison of sustainability metrics across five UK intentional communities, which concludes that communities are, broadly, somewhat more eco than non-communities, particularly if they make an effort.

Photos and narrative describe the beauty and difficulty of low-impact communities navigating the planning system, while architectural drawings and statistics illustrate attempts by Chapeltown Co-Housing to create affordable community rooted in the inner city.

It’s an absolute must for the bookshelves of libraries, social centres and anywhere people searching for an alternative might congregate, and a great present for anyone wondering how or where to live a better life. 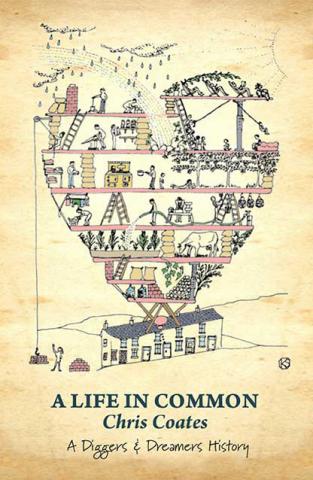 Published around the same time is the ‘autoblogography’ of Chris Coates – a communard and communes scholar for many decades, author of Communes Britannica and long-time member of the D&D editorial collective.

A Life in Common collects his blog posts written almost weekly during 2020, a sort-of chronological series of memories that start with him finding alternative theatre and squatting in London as a 1975 school-leaver, and then moving up to the ‘People in Common’ commune in Burnley, which he eventually left in 1989.

Each story is a fascinating snapshot, capturing aspects of social scenes, political outlooks, and personal dynamics. All the usual ’70s and ’80s suspects appear, many in their East Lancashire incarnations – Peace News potlatches and anti-nuke action, fancy Hampstead squats, the Welfare State International, John Seymour’s Self-Sufficiency, punk music and zines, supporting the miners’ strike, the Lucas Aerospace plan, debates about home education, collective parenting, income-sharing and free love, John Tyme coming to the M65 public enquiry and getting it shut down, various brushes with the law, lots of clowning, building, woodworking and, of course, meetings.

It evokes a time of ambition and enthusiasm, a network of connections which seem both looser and at the same time more trusting than I can imagine now, of people happy to live on practically nothing, to experiment with ideas, an expectation of working hard, and of giving and receiving hospitality that created a kind of DIY social security.

Of course, you might want to dip in and out of the book, read a bit here and a bit there, but I read it cover to cover in one go.

Chris’ writing is accessible and funny – although given how many ridiculous things they got up to, he’d have been hard pressed to make it boring.

Both titles available from www.diggersanddreamers.org.uk