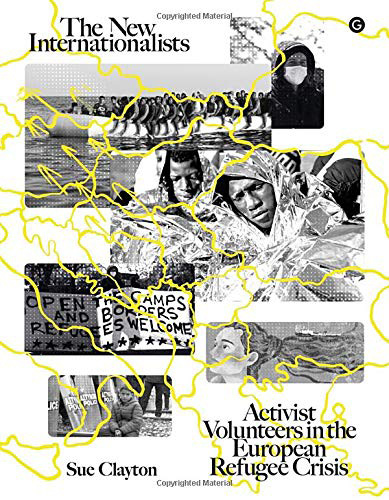 Having volunteered with a small religious group supporting homeless refugees in Calais and London, I resonated strongly with this book. In particular, it helped me to see, in hindsight, our contribution as part of an extraordinary international mobilisation of volunteers endeavouring to provide refugees and migrants with on-the-ground help.

The book is divided geographically into ‘flashpoints’; places where refugees and migrants gathered to cross borders or found their journey across Europe blocked by governments’ policies.

Covering the period from 2015 to the recent past, each section begins with the testimonies of volunteers, followed by an explanation of the conditions in each area and the groups involved.

What is remarkable is the variety of ways in which ordinary people responded, whether in major cities, on Greek islands or online. In one poignant testimony, a woman in Norway accompanies a family by phone and computer as they escape from Iraq through Turkey, and make the sea crossing to Greece.

In another, a fireman wades into the sea to rescue a baby before jumping on the plane home.

Another, in Ventimiglia, Italy, describes how, working at night to avoid the police, they had to ‘chuck’ food packages to people in a ravine.

While these accounts of extraordinary bravery make for compelling reading, it is through the compassionate witness of volunteers that we learn of the harsh conditions endured by refugees and migrants as they continue their journey across Europe.

An important thread highlights the role of direct experience in raising political awareness. When volunteers witness the hazardous conditions in the camps – and the migrants’ reliance on grassroots groups to provide food, shelter, clothing – they are forced to question their own governments’ complicity and the ideal of Europe as a caring, humane democracy.

For example, the UK government paid for the policing of Calais which resulted in the violation of refugees’ basic human rights and created an unsafe environment for both refugees and volunteers.

We learn how some volunteers established regular meetings between activists, helpers and residents and guidelines on staying safe and acting with respect.

With little experience and faced with a crisis situation, volunteers in Calais weren’t always able to take care of their own mental health, feeling that there were far greater needs that had to be attended to. Three therapists describe the signs of trauma and distress they found amongst volunteers and the interventions they used to care for the volunteers’ welfare.

The last chapter and postscript, featuring recent eyewitness accounts from Lesvos, describe how the increased presence of far-right groups, as well as COVID restrictions, have added to the desperate conditions.

However, in a hopeful conclusion, one volunteer, himself a refugee, writes: ‘I think the key to supporting refugees is to help them back onto their own feet. It is important to believe in them and their ideas.’