‘It’s better to go to jail than to be a murderer!’ 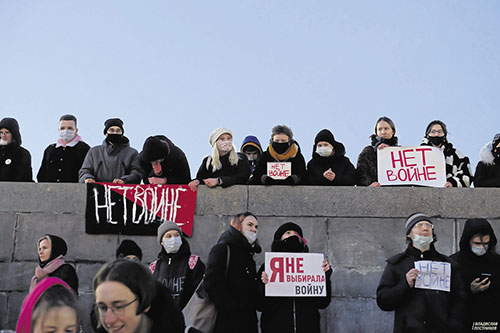 An anti-war demonstration in 1905 Square, in the centre of Yekaterinburg, the fourth-largest city in Russia, on the day of the invasion of Ukraine, 24 February. Most of the signs say: ‘No War’. One says: ‘I didn’t choose war’. PHOTO: VLADISLAV POSTNIKOV

Russians speak out against the war

Below are a few of the dozens of anti-war statements made by groups in Russia. They are taken from a constantly-updated online collection maintained by the Russian Movement of Conscientious Objectors. (They have been auto-translated from Russian.)

The Movement of Conscientious Objectors from Military Service (24 February)

… Russia has declared a new war on a neighboring country, to which it left no right to self-determination and no hope for a peaceful life.

This was not the first time Russia declared war: we are aware that the war has been going on for all these eight years at the initiative of the Russian Federation and that the war in Donbas is a consequence of the illegal annexation of Crimea.

We believe that Russia and its president are not and never have been concerned about the fate of the people in Luhansk and Donetsk [in eastern Ukraine], and the recognition of the republics after eight years was only needed to invade Ukraine under the guise of liberation goals.

Feminism as a political force cannot be on the side of the war, and especially the war of occupation.

Feminism advocates the development of society, helping those who are vulnerable, multiplying opportunities and prospects, as well as ensuring that there is less violence around and people coexist peacefully with each other.

War means violence, poverty, forced migration, broken lives, insecurity and the disappearance of a future. It opposes the whole essence of the feminist movement.

War exacerbates gender inequality and can set back all human rights gains many years.

War brings with it not only physical violence, but also sexualised violence: as history shows, during war, for any woman, the risk of being raped increases several times.

For these and many other reasons, Russian feminists and those who share feminist values need to take a strong stand against this war unleashed by the leadership of our country.

The current war, as Putin’s address shows, is also under the banner of ‘traditional values’ that Russia allegedly decided to carry to the world in a missionary way, using violence against those who disagree with them or hold other views.

What these ‘traditional values’ consist of is well understood by anyone who is capable of critical thinking: they are based, among other things, on the exploitation of women and the struggle against those whose way of life, self-determination and activities go beyond the narrow patriarchal norm.

Justifying the occupation of a neighbouring state by the desire to carry this distorted norm and demagogic ‘liberation’ to it is another reason why feminists throughout Russia must resist this war with all their might.

Feminists today are one of the few active political forces in Russia.

For a long time, the authorities did not perceive us as a political movement, and therefore we were temporarily less affected by repression than others.

More than 45 feminist groups operate throughout the country, from Kaliningrad to Vladivostok.

We call on feminist groups and individual feminists to join the Feminist Anti-War Resistance and join forces to fight the war and the government that started it.

There are many of us, and together we can do a lot: over the past 10 years, the feminist movement has gained enormous media and cultural power, it’s time to turn it into political power.

We are the opposition to war, patriarchy, authoritarianism and militarism. We are the future and we will win.

(Recruit’s School or ‘the School of the Conscript’ is a Russian human rights organisation for the protection of the rights of conscripts, military personnel and those doing alternative service. – ed)

Soldiers’ Mothers of St. Petersburg condemn the military aggression that Russian troops are deploying in Ukraine before our very eyes. This is a war, and any war is destruction, blood, violence, innocent victims, the collapse of the future. No one of sound mind can advocate war.

What can we do in this situation: ordinary citizens, who no one consulted when deciding to start hostilities? In fact, a lot.

We listen and read numerous appeals, we see the anxiety and anxiety of people, especially the parents of sons who are serving in the armed forces of Russia.

But at the same time, we also notice a paralysing fear, we see loss and misunderstanding. All this dulls the activity and does not allow us to act.

Mothers and fathers of the lads serving! … We strongly encourage you to be close to your sons! Connect with other parents, create chats, interact. Only together, feeling the same anxious – but never ceasing to express warmly hopeful – breath of friends in misfortune, you can overcome all difficulties. Look into the eyes of other sons and mothers who have been called ‘your enemies’!

We also appeal to military personnel, officers! You can submit applications for refusing military service in order not to participate in this tragedy, which in any case will be followed by a bitter retribution. In all military conflicts, of which there have been many in the 30-year history of the Russian state, there have been cases of refusal to serve. There will be now!

… It is by acting unitedly that you will not allow yourself to get bogged down in the illusion that you are alone with your opinion. Believe us, many people think in a similar way but, for various reasons, they are afraid to speak.

An anti-war demonstration in 1905 Square, in the centre of Yekaterinburg, the fourth-largest city in Russia, on the day of the invasion of Ukraine, 24 February. Most of the signs say: ‘No War’. One says: ‘I didn’t choose war’. PHOTO: VLADISLAV POSTNIKOV

The list of anti-war statements compiled by the Movement of Conscientious Objectors is here: bit.ly/RussiansAgainstUkraineWar