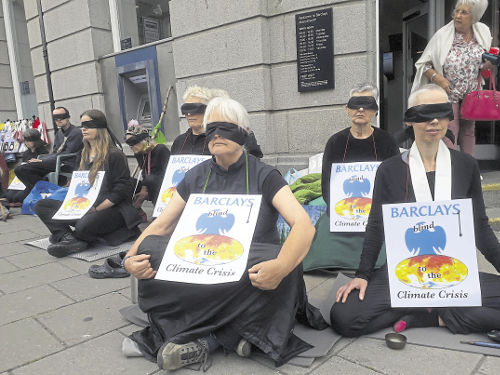 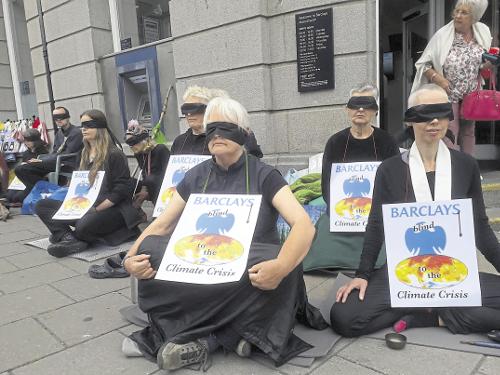 Climate change actions have been many and varied in the past few months.

On 6 July, members of West Wales Triratna Buddhist Group took ‘meditative action’ outside Barclays bank in Aberystwyth. Wearing blindfolds and carrying placards saying ‘Barclays – blind to the climate crisis’, the group cut a powerful image of compassion and determination during their two-and-a-half-hour meditation.

Barclays bank is the largest fossil fuel investor in Europe and the Aberystwyth action was part of a wider front of pressure on Barclays to behave more ethically.

That same motivation drove members of Extinction Rebellion (XR) from across Wales to join in a mass action that closed central Cardiff to traffic for three days, 15–17 July.

Wendy Lewis reported: ‘People of all ages and persuasions were united in making climate change the focus of urgent attention and making it impossible to ignore or deny the reality of what we are doing to our planet. Castle Street became an oasis of joyful creativity in the face of this existential threat, the streets reclaimed for bikes, people and canaries....’

In a perhaps not unrelated move, on 18 July, Cardiff council voted almost unanimously to transfer around £200 million into a fund tracking the Global Low Carbon Index and to divest the rest of their pension fund from fossil fuels within five years.

Research by Friends of the Earth (FoE) has found that the eight local government pension schemes in Wales invested over one billion pounds between them in fossil fuel companies.

Also that week, pupils aged 14–18 from south and west Wales schools debated the issue of climate change during MockCOP sessions in Cardiff and Swansea.

Organised by the Welsh Centre for International Affairs (WCIA) and the anti-deforestation group, Size of Wales, and financed by the ScottishPower Foundation, the sessions allowed students to represent different countries at a Model United Nations Climate Change Conference of the Parties (COP). This gave them a unique perspective on climate change issues.

Sarah Wynne from Porthcawl said: ‘I was representing the USA and didn’t really know what to expect, but I have really enjoyed the day. I enjoy debating and it’s been great listening to what other delegates had to say.’

Rita Singh, who chaired the MockCOP at Swansea’s Civic Centre, said: ‘[T]he students really took on the nations and their views, whether they believed it or not.... It was clear how sympathetic they felt, and that they stood up for the cause. They also recognised the importance of other roles and, best of all, the need to get together to solve a global challenge like climate change.’

All participants in the regional MockCOPs can apply to take place in a final overnight event in Cardiff in November 2019.

More info from the WCIA: www.tinyurl.com/peacenews3311