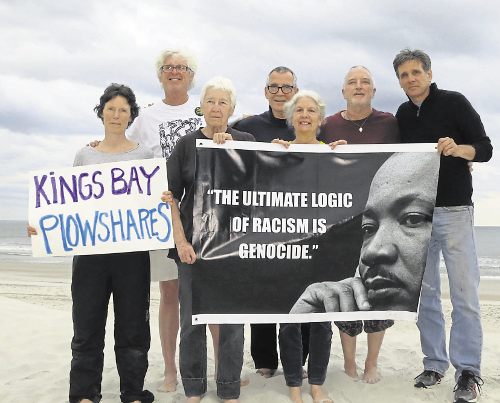 Seven US Catholic peace activists are facing up to 25 years in prison each, after breaking into a Trident submarine base at Kings Bay in Georgia, on the east coast of the USA. On 4 April 2018, the 50th anniversary of the assassination of civil rights leader Martin Luther King Jr, the seven entered Kings Bay in order to attempt the latest ‘Ploughshares’ disarmament action. (PN 2618 – 2619)

The seven symbolically carried out the biblical injunction to 'beat swords into plowshares' through various nonviolent actions, including pouring their own blood, hammering on a Trident missile monument, and placing crime scene tape before the entrance to a headquarters building.

The seven were subsequently charged with conspiracy, destruction of property, depredation of government property and trespass.

On 27 August 2019, US federal judge Lisa Godbey Wood set a date of 21 October to hear the trial of the seven at the court in Brunswick, Georgia.

One of the seven, Clare Grady, said: 'We took these actions to say the violence stops here, the perpetual war stops here – at Kings Bay, and all the despair it represents.'

She added: 'We took these actions grounded in faith and the belief that Jesus meant what he said when he said, “Love your enemies,” and in so doing offers us our only option for hope.'

After some time in detention, Martha Hennessy, Carmen Trotta, Patrick O’Neill and Clare Grady were bailed after accepting restrictive bail conditions including home confinement and being electronically tagged.

Mark Colville, Steve Kelly and Elizabeth McAlister refused the bail conditions and remained in the Glynn county detention centre. The first time they saw their co-defendants was at a pre-trial hearing on 4 August.

At another pre-trial hearing, on 26 August, the defendants put forward numerous legal reasons for the charges against them to be dismissed. It was the first time any defendant in the US had tried to use the Religious Freedom Restoration Act (RFRA, 1993) as a defence in relation to criminal charges.

The seven also pointed out that the hundreds of first-strike Trident nuclear weapons on the submarines in Kings Bay are illegal and immoral.

Judge Lisa Godbey Wood dismissed all the pre-trial motions. However, she did find that the seven had a prima facie case under the RFRA because they were sincerely religiously-motivated to challenge the nuclear weapons at the naval base.

There will be a Peace News vigil for the Seven on Monday 21 October. 12.30pm–5.30pm, US embassy, Ponton Road, London SW11 7US. More info: 07980 748 555. Unfortunately, it is only possible to send the prisoners pre-stamped postcards, which we don’t think are available to send from the UK to the US. More info about the Kings Bay 7: www.kingsbayplowshares7.org. There have been 100 Ploughshares actions around the world since 1980, mostly involving the hammering of military equipment. The women-only ‘Seeds of Hope/East Timor Ploughshares’ action, against a Hawk jet due to be exported to Indonesia, is described in Andrea Needham’s 2016 book: The Hammer Blow: How 10 Women Disarmed a Warplane (available from PN: 020 7278 3344 or online).