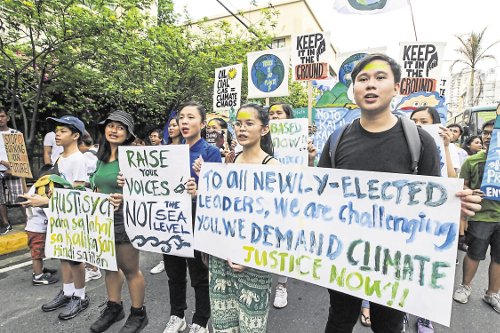 01 Oct 2019 Feature by Gabriel Carlyle
School strikers and supporters march in Manila, the Philippines, on a global day of action, 24 May. Photo: Leo Sabangan II / 350.org

The climate movement needs an acceleration of forward steps and more of the urgency of commitment that XR and the climate strikers have been demonstrating.

But urgency and commitment by themselves aren’t enough.

Daniel Hunter tells a powerful story in The Climate Resistance Handbook of when he was part of a group trying to stop the US war in Iraq: ‘We were able to organise a march of 2,000 people in my city. That’s a big turnout. And we got good press coverage.

‘So we did it again.

‘This time we got 10,000 people in the streets. I was one of the emcees for the rally and couldn’t see to the end of the march. At that time, it was the largest march I had ever been part of organising. The feeling was amazing.

‘So what did we do next?

‘We didn’t vary our tactics. We did it again. This time, we only got 1,500 people marching. And less press coverage.

‘Then how did we feel? Pretty bad.

‘And what did we do next?

‘Another march. Just a few hundred came this time – and virtually no press.

‘The problem was that we didn’t really have a plan. We just had a tactic. So we kept using the tactic because that’s what we knew. We were doing endless actions.’

There are more stories and lessons from The Climate Resistance Handbook inside this issue. (Peace News has printed the handbook and is distributing it at cost-price – £1.65 per copy – as a service to the climate movement. More details on p9.)

Daniel’s point is that there is a difference between a series of ‘endless actions’ that go nowhere and a campaign of thought-out, connected activities that can actually win changes.

One example of a recent successful climate movement campaign is from the US.

Over five years, Earth Quaker Action Team (EQAT, pronounced ‘equate’) went from being a handful of people standing in front of a Philadelphia flower show in March 2010 to being able to organise 30 actions across 12 states (plus Washington DC) with a common focus all on the same day: 6 December 2014.

In March 2015, EQAT succeeded in its goal of forcing a major US bank, PNC, to stop funding mountain-top removal coal-mining in Appalachia.

Longtime activist George Lakey, one of the co-founders of EQAT, commented: ‘It became clear to PNC that EQAT was growing and would never go away until the bank changed.’

By 2012, PNC was investing $687.5 million in financing four companies responsible for nearly half of Appalachian mountain-top removal coalmining.

Lakey defines a campaign as ‘a focused mobilisation of energy with a clear objective, over a time period that can realistically be sustained by those who identify with the cause’.

‘Running a campaign’, says Lakey, ‘is like taking a magnifying glass and holding it between the sun and a piece of paper. By focusing the energy of the sun, the glass ignites the paper.’

Typically, Lakey explains, a campaign ‘makes a demand for one or more specific changes, identifies an opponent or “target” that can respond [usually a person or small group of people], and generates a series of nonviolent tactics that escalate over time.’

‘Successful campaigns focus on their target over time – nine months, two years, even more if they have the people resources – with a specific demand that seems achievable,’ says Lakey.

An ‘achievable’ goal isn’t necessarily ‘easy’. What is achievable is clearly something that can shift over time – and which activists should be trying to shift, in part by waging campaigns!

“There has to be a statutory duty on each local authorities to develop a plan for reducing carbon emissions – and a duty to carry out the plan.”

Such an approach doesn’t mean giving up on longer-term visionary goals. But it does recognise that these cannot be achieved overnight and that we need to build the people power, the skills and the vision to make the changes we want – and it provides a tried-and-tested method for building these very things.

The victories of the civil rights era in the US were rooted in scores of campaigns that moved, in less than a decade, from forcing the city of Montgomery to allow black passengers to sit where they liked in public buses (1956) to forcing the US government to pass the Civil Rights Act (1964) and the Voting Rights Act (1965).

Not how it was done

These victories were not won by demanding a civil rights act at the outset and then repeatedly mobilising people to block traffic in Washington DC until the US government gave in to this demand.

The power of the movement was built up over many years by a series of escalating and interconnected campaigns (in the Lakey sense) including the iconic lunch-counter sit-ins in 1960 and the Freedom Rides in 1961.

The lunch-counter sit-ins by university students were aimed at desegregating eating places in particular towns – initially the Woolworth’s in Greensboro, North Carolina, but within weeks in dozens of towns in several states.

The Freedom Rides were carried out by groups of African-American and white activists who disobeyed segregated seating rules on long-distance buses, and rode them to interstate bus terminals in the South.

In these terminals, the activists desegregated waiting rooms, toilets and restaurants. They suffered beatings, arrests, weeks in jail, a fire bomb attack, and terrifying mob violence.

Within months, the Freedom Riders won a ban on segregation in all interstate bus facilities.

These were very focused campaigns, each targeting a small part of the institutionalised racism that the movement faced – and these focused campaigns together helped to change the whole country.

If the British climate movement wants to learn the lessons, and achieve the successes, of the US civil rights movement, then it needs to follow the same targeted, escalating, campaign-based approach.

If we’re going to be successful, it is important that groups focus on a single target decision-making body and a small number of demands, and then actually dig in to win their demands from their targets – as opposed to scattershot one-off protests (‘endless actions’) that may generate some media interest but are unlikely to achieve much in the way of concrete victories.

We need to learn from the way that EQAT stayed focused for five years on one target (the board of PNC) and one demand (stop funding mountain-top removal coal-mining).

It is also important that groups resist the idea that local and regional activities are just recruitment tools for big mass protests in London.

“Groups must resist the idea that local and regional activities are just recruitment tools for big mass protests.”

We need to stop seeing those big protests as the main event.

We need to value the smaller campaigns like the lunch-counter sit-ins and the Freedom Rides.

What does all this mean in practice?

Well, several movements and campaigns connected to climate change already exist, including: the divestment and anti-fracking movements, the campaigns to end Big Oil’s sponsorship of our cultural institutions (thereby undermining their ‘social licence to operate’), and the campaign to stop a third runway at Heathrow.

But many, many more campaigns are needed.

For school strikers, two immediate areas might be getting teachers and other workers to divest their pensions funds from fossil fuels and getting solar panels installed on school roofs.

Partly inspired by Extinction Rebellion, many local authorities have passed ‘climate emergency’ motions. This now needs to pass onto the second – and much more difficult – stage of creating campaigns to force local government to make these aspirations a reality.

A recent report by Friends of the Earth (FoE) lists three over-arching ‘strategic actions’ that local authorities should be taking on climate change:

Each one of these 36 actions could be a focus point for a local or regional campaign or movement.

Major national campaigns will also be needed. There has to be a statutory duty on each local authorities to develop a plan for reducing carbon emissions – and a duty to carry out the plan.

There will also have to be a push to ensure that local authorities have the funding they need to develop and carry out these carbon reduction pathway plans.

(a) an immediate ban on new permits for new fossil fuel projects or the expansion of existing projects (including exploration, extraction, transportation and power); and

(b) the immediate introduction of regulation to stop public and private financial flows to and from fossil fuel companies and projects.

You can see how there could be many smaller, local campaigns related to these big goals.

George Lakey argues that it is ‘[w]hen growing campaigns build the direct action skills and attitudes for mass struggle, and merge into movements, and push those movements to join in a movement of movements, [that] we’ll have the people power to push aside the 1% and transform our countries.’

Gabriel Carlyle, active with Divest East Sussex, is the Peace News promotions worker. In 2009, he was one of 114 activists arrested for allegedly planning to shut down a coal-fired power station at Ratcliffe-upon-Soar.