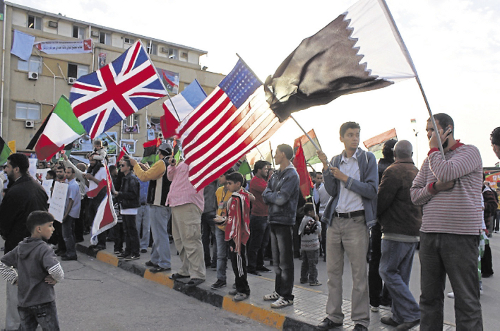 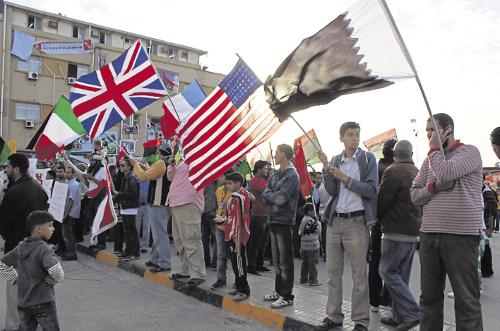 France led the charge against Muammar Gaddafi in 2011 not out of a concern for Libyan civilians, but out of national self-interest. That is the claim put forward in a house of commons foreign affairs committee report on Britain’s participation in the war against Libya, published on 14 September (see box below). This article picks out aspects of the report, and of the evidence it collected, which received less attention in the mainstream media coverage. In summary, the evidence suggests strongly that military action in March 2011 was neither an urgent humanitarian necessity, or the only way of moving Libya away from dictatorship towards democracy.

When we turn to the declassified state department document itself, there is a further revelation: the sources Blumenthal consulted claim that Gaddafi had practically unlimited resources to draw on: ‘143 tons of gold, and a similar amount in silver’. According to these sources (identified by the foreign affairs committee as French intelligence officers): ‘This gold was accumulated prior to the current rebellion and was intended to be used to establish a pan-African currency based on the Libyan golden Dinar. This plan was designed to provide the Francophone African Countries with an alternative to the French franc (CFA).’

Blumenthal goes on: ‘According to knowledgeable individuals this quantity of gold and silver is valued at more than $7 billion. French intelligence officers discovered this plan shortly after the current rebellion began, and this was one of the factors that influenced [French] President Nicolas Sarkozy’s decision to commit France to the attack on Libya.’

The CFA is a currency that France imposed on its African colonies in 1945 which is still used by 14 African countries in two CFA monetary unions; the currency is pegged to the euro at a rate determined in Paris. Monetary union requires African members to deposit half their hard currency reserves in Paris, under French control.

While there must always be question marks over uncorroborated intelligence reports, what the Blumenthal report suggests is that the French government saw a threat to its financial domination of French-speaking Africa, and it resolved to overthrow the leader who was laying the basis for greater African independence. On this analysis, hinted at in the foreign affairs committee report, the fate of civilians in Benghazi was irrelevant as a motivation for French military action, but useful as a propaganda device.

The committee was able to be scathingly sceptical about French motivations (especially those of Sarkozy himself), but it was not as searching in relation to the British government. The committee accepted that the push for military action against Libya came from France, and that Britain very quickly supported this initiative, but does not ask why Britain chose to support French action. The report concludes, without providing compelling evidence: ‘The UK’s intervention in Libya was reactive and did not comprise action in pursuit of a strategic objective.’

The main finding in the report is that: ‘By the summer of 2011, the limited intervention to protect civilians had drifted into an opportunist policy of regime change.’ The evidence compiled by the committee, however, points clearly to the British government being set on overthrowing Gaddafi from the very beginning, in March 2011.

The committee took evidence from two Libya experts: George Joffé, visiting professor, King’s College London, and Alison Pargeter, a Middle East analyst and author of Libya – The Rise and Fall of Qaddafi (Yale University Press, 2012). The two researchers agreed that despite Gaddafi’s ‘bloodcurdling’ rhetoric against people in Benghazi, there was no ‘real evidence at that time that Gaddafi was preparing to launch a massacre against his own civilians’.

Pargeter pointed out that he had previously ‘retaken towns from the rebels without attacking civilians in early February 2011’. Joffé added that the Libyan army was ‘depleted’, with perhaps only a third of its strength ‘actually operative’, and dependent on unreliable mercenary forces: ‘The evidence was that it would have been very difficult for him to carry out the kind of massacres that people anticipated.’

Pargeter noted in her evidence: ‘If you look at the famous speech – “I’m going to hunt them down street by street” – actually what he said at the beginning was: “I’m going to go for the bearded ones.” In Gaddafi’s head, this was an Islamist rebellion, and he was going to go and hunt down those who were responsible.’

So far, I’ve picked out some of the information that seems to have been available to policymakers in March 2011. (The report also presents evidence that came to light later: ‘An Amnesty International investigation in June 2011 could not corroborate allegations of mass human rights violations by Gaddafi regime troops. However, it uncovered evidence that rebels in Benghazi made false claims and manufactured evidence.’) It is clear that in March 2011 the Cameron government either did not seek an informed assessment of the risk of a massacre in Benghazi, or it ignored information and analysis that did not serve a military policy.

The committee also found that the British government did nothing to explore non-military options. The committee reports that there were contacts that should have been followed up with Gaddafi’s reform-minded son, Saif Gaddafi, and with Gaddafi himself, who gave signs of seeking a negotiated solution that might involve abdication. The committee concluded: ‘Political engagement might have delivered civilian protection, regime change and reform at lesser cost to the UK and to Libya. If political engagement had been unsuccessful, the UK and its coalition allies would not have lost anything. Instead, the UK Government focused exclusively on military intervention.’

In his evidence to the committee, Joffé suggested that despite Britain’s opening to Libya from 2004, ‘there was still a very deep suspicion and a very deep dislike of the Gaddafi regime’ in the British foreign policy establishment. In the context of the Arab Spring, ‘there was a desire to speed the process on and to take advantage of what appeared to be happening in 2011’: ‘This is an opportunity; let’s exploit it. Let’s get rid of somebody whom we have long disliked, even though we embraced him temporarily. That was the real driver.’

One important event in the run-up to the war on Libya was the release of Abdelbaset al-Megrahi, the Libyan convicted of the Lockerbie bombing, in August 2009. Asked by Conservative MP John Baron whether Megrahi’s release and return home had an impact on the British government’s desire to do a U-turn in its policy towards Libya, Joffé said he believed it ‘played a very significant part’.

The Sunday Telegraph reported in 2013 that Megrahi’s release was linked by the Libyan government in 2008 to the purchase of a British missile defence system. The Libyans never signed the contract.

20. A further insight into French motivations was provided in a freedom of information disclosure by the United States State Department in December 2015. On 2 April 2011, Sidney Blumenthal, adviser and unofficial intelligence analyst to the then United States Secretary of State Hillary Clinton, reported this conversation with French intelligence officers to the Secretary of State:

According to these individuals Sarkozy’s plans are driven by the following issues:

a) A desire to gain a greater share of Libya oil production,
b) Increase French influence in North Africa,
c) Improve his internal political situation in France,
d) Provide the French military with an opportunity to reassert its position in the world,
e) Address the concern of his advisors over Qaddafi’s long term plans to supplant France as the dominant power in Francophone Africa.

The sum of four of the five factors identified by Sidney Blumenthal equated to the French national interest. The fifth factor was President Sarkozy’s political self-interest.

The foreign affairs committee report on Libya can be downloaded or viewed online from the committee publication page:
www.tinyurl.com/peacenews2322