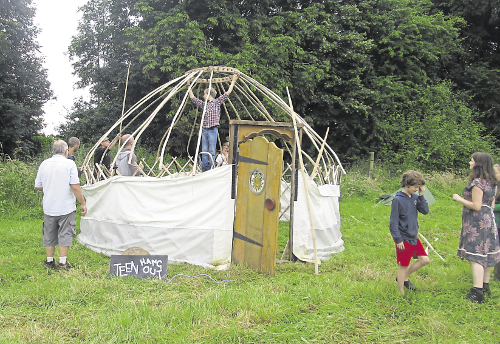 PN's editor reflects on 5 days of reflection, re-connection and re-charging

01 Oct 2016 Feature by Milan Rai
This year there was a self-built, self-managed, self-budgeted teen space in a yurt with games, music, rugs, cushions and Magic cards. Photo: Roy St Pierre

The sun shone on our corner of Shropshire, and 120 of us at Peace News Summer Camp enjoyed five lovely days of reflecting, re-connecting, recovering, and recharging our batteries.

The highlight of the camp was definitely the joyous celebration of the 20th anniversary of the Seeds of Hope Ploughshares action!

We were lucky to have four of the 10 Seeds of Hope women with us: Jo Blackman, Lyn Bliss, Emily Johns, and Andrea Needham.

On the Friday night, Andrea did a wonderful illustrated book reading of The Hammer Blow – how 10 women disarmed a warplane (published by PN in January). She and the other women explained how they spent a year planning the disarmament of a Hawk fighter jet due to be exported to Indonesia to be used against the people of East Timor – and how they won in court after spending six months in prison for their disarmament action.

On Saturday 30 July, which was the 20th anniversary of the women’s acquittal, there was a whole-camp workshop about the Seeds of Hope action, designed and run by the four women on site. It got rave reviews, with evaluation forms giving it 9.8 out of 10 on average.

People wrote afterwards: ‘I felt like I was sharing a profound experience and that I was inspired and educated. I also liked that we did a ritual for those who lost their lives in East Timor.’ ‘I liked that it was done collectively. Empowering everyone to think that “ordinary” people can take action.’

The theme continued on Saturday night with a barnstorming performance by Seize the Day, the superstars of modern radical British folk. Their touching and powerful song ‘With My Hammer’ immortalised the Seeds of Hope women – and, at this year’s camp, brought down the house.

Another highlight of the camp was a thoughtful and passionate whole-camp discussion of the aftermath of the EU referendum debate . Our wonderful panel was: Liz Fekete, director of the Institute for Race Relations, and Natalie Bennett, in one of her final public events as leader of the Green Party. (Due to mistakes by the organisers, the third member of the panel, Bruce Kent, did not make it to the camp. Sorry, Bruce!) The meeting was chaired admirably by PN production worker Emily Johns.

Liz and Natalie gave us some initial thoughts on bringing people together for constructive action. Then it was opened up to the floor, and a woman asked: ‘How do we reach out to the working classes?’ Someone else answered: ‘We are the working classes’, to which the first woman responded by saying that she was working class herself, which complicated the ‘we’ in her question.

There was then quite a long conversation between working-class people in the marquee, exploring some of the complexities of class in Britain today. It felt like liberation was happening in that conversation itself.

At one point, a working-class woman said she didn’t want the post-referendum debate to end up blaming the working class. A working-class man responded instantly: ‘We’re used to it.’

One of Natalie Bennett’s points, which confirmed her effectiveness as an organiser, was that she focuses on what she has in common with folk. For example, she met an owner of a B&B who was anti-EU and anti-immigration – but who was also worried about the closure of the accident and emergency department at the local hospital. That was something Natalie Bennett could team up with her about.

One of Liz’s points was that she was not 100 per cent behind referendums. They had to have protection built into them for minorities. Liz pointed out that in Switzerland, the ban on minarets was brought in by a referendum.

Was it the best-ever camp? From the 36 evaluation forms handed in, it was the top-rated of the eight PN Summer Camps we’ve held, equal with last year, at 8.9 marks out of 10 (averaging scores for ‘how the camp was run’, the location, the children’s space, workshops, entertainment and food). It was brilliant!

Thank you to everyone in the organising team who worked so hard all year (especially Arkady, Bek, Beth, Ceinwen, Chris, Rakesh), to everyone who did work at camp, including the wonderful Children’s Space team (Corryn, Daisy, Ian, Nik) and the set-up and tat-down crews, and everyone who came! Thank you also to Lush Charity Pot for your generous support for the camp over many years!