Nick Srnicek and Alex Williams, Inventing the Future: Post-capitalism and a World Without Work 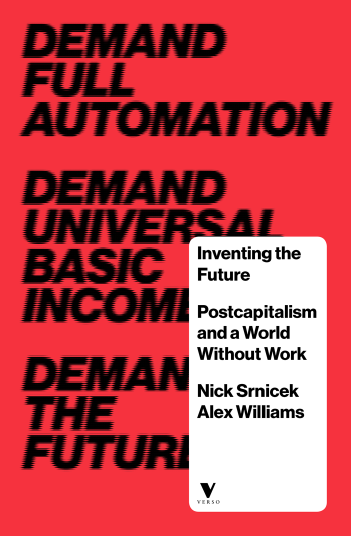 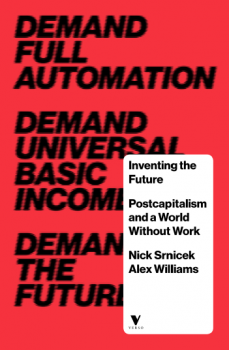 In the next two decades, 47% to 80% of current jobs will be lost to automation. According to Srnicek and Williams, this is good news; and the contemporary left needs to embrace this future if it is to transform the status quo with a sustainable economic alternative.

An exciting manifesto, written by two prominent left-accelerationists (who believe that technological expansion can generate social change, beyond capitalism), it begins by recognising our current state of over-saturation. For Srnicek and Williams, today’s rapid automation, expanding surplus populations and continued imposition of austerity all heighten our need to rethink the world.

It also fundamentally breaks with left-wing politics as we know them. Describing the latter as ‘folk-politics’, Srnicek and Williams lay bare the limitations of short-term, usually local, movements that idealise the past instead of moving forward. A striking example is the Occupy movement: if it resisted by slowing down the advance of capitalist enterprise, it also failed to significantly dent neoliberalism’s global supremacy.

Neoliberalism, on the other hand, is non-folk. It is so engrained in our way of apprehending the world that it is difficult for anyone to imagine alternatives. In a thoroughly convincing chapter, Srnicek and Williams unravel the ways in which neoliberalism has infiltrated European societies through cultural hegemony (think tanks, media groups, political lobbies and academia).

At the crossroads between the tactics of neoliberalism and the failures of left-wing resistance, Inventing the Future envisages new alternatives that reclaim modernity and embrace technology. Automation, they argue, is going to drastically transform the labour market in terms of distribution, services and production – and this leads them to explore the possibilities for a world without work. A high-tech economy and a universal basic income are at the core of their vision of a society that provides real freedom and advanced standards of living.

To provoke these changes, Srnicek and Williams emphasise the need for a ‘counter-hegemony’ that triumphs over neoliberal common sense. As well as arguing for a more pluralistic approach to how economics is taught, the writers stress the need for governments to prioritise technological development. In other words, instead of funding nuclear weapons in the long-term, governments should fully invest in hi-tech tools if they hope to bring about any social improvement.

Those who dare to imagine a world peace that doesn’t depend on the misery of the many to ensure the prosperity of a few will find this a memorable read. Anyone intrigued by the currently expanding automation process will also find a thoroughly-researched account of its short- and long-term effects. Meanwhile, publishers at Verso have taken care of those who could really use the book: copies of Inventing the Future have already been sent to all the members of the Labour shadow cabinet.