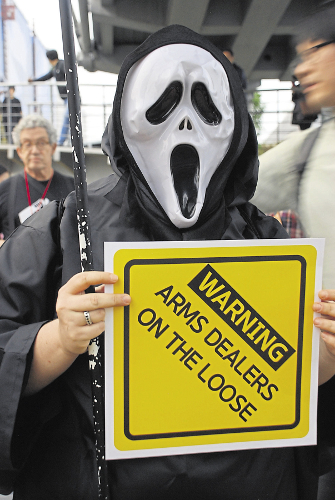 Action against arms fairs in South Korea and New Zealand 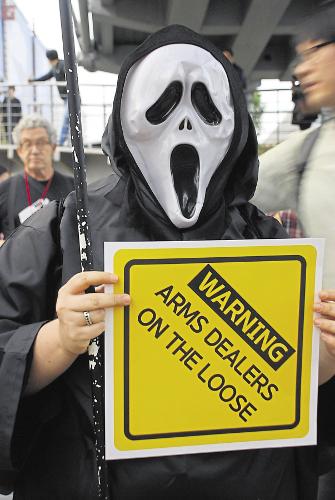 I had barely recovered from the marathon of activism against the DSEI arms fair in East London in September (see PN 2586–2587), when I found myself on a plane to Seoul, South Korea, to take action against the ADEX (International Aerospace & Defense Exhibition) arms fair. I joined activists from five continents for a gathering organised by the Korean anti-militarist group ‘World Without War’ and the international network War Resisters International.

The gathering aimed to explore the economic pillars that make war inevitable, and how we take action against those who fund and profit from conflict and militarisation. For four days, we heard about the different ways people are impacted by the military-industrial complex and are taking action against it; from challenging the creeping militarisation of policing in the US, to the campaign against the US naval base on South Korea’s Jeju Island, to the links between extractive industries and militarisation in Venezuela.

Disrupting war profiteering takes a whole range of activities, from research, lobbying and legal challenges to direct action and creative campaigning. Although we were coming from different contexts, we were able to share stories, tactics and skills and find new ways of linking our struggles and strengthening our movement.

Andrew Feinstein, former ANC South African MP and currently director of Corruption Watch UK, gave a talk about his book and upcoming film The Shadow World, which reveals the intrinsic corruption of the arms trade and the revolving door between governments, the military and arms companies. Although The Shadow World paints a bleak and daunting picture of the global arms trade, Andrew ended his talk with a call to direct action. Which is exactly what we did.

The night before ADEX was due to open, we descended on the Marriott hotel to disrupt the arms fair’s launch event. Arms dealers were greeted by banners in multiple languages and chants as they arrived at the hotel. Inside, a group of activists pulled out placards, flung blood money and chanted, ‘Stop the arms trade’.

The next day, a few of us paid a visit to the arms fair. Despite having spent years protesting against arms fairs on the outside, this was the first time I had been up close to the deadly equipment. Many of the same companies that were at DSEI were in Seoul, including BAE Systems, Elbit and Lockheed Martin; and the UK government’s arms sales department even had its own stand.

But ADEX didn’t go ahead unheeded, with Korean activists taking creative action inside the fair.

I got back to London feeling excited about the links we had made and energised by the growing international movement. On my first, slightly jet-lagged, day back in the office, I logged into my emails to find a message from activists in New Zealand!

They were planning to take action at the NZ Defence Industry Association conference in Wellington and were organising several events in the run-up to it with similar themes to those we used to organise ahead of DSEI. Stop the Arms Fair decided to organise a solidarity protest at the New Zealand high commission in London in time for the start of their day of action.

Just as we were were packing up from our demo, we started getting news over Twitter that hundreds of activists were blockading the arms fair in Wellington! We saw many of the same messages on banners which we had used to blockade vehicles outside the ExCeL Centre in September, including ‘Refugees welcome, not arms dealers’. We really are part of a global movement.

In challenging something as powerful and pervasive as the military-industrial complex, it can be hard to know where to start, to feel like you’re having an impact, and to visualise an end to it. But arms fairs like DSEI and ADEX bring us face to face with the arms trade and give us a tangible target on our doorstep.

The depravity of the arms industry is laid bare as dictators are courted and human-rights-abusing regimes are brought together with the companies supplying weapons. Shutting down these arms fairs will bring us one step closer towards putting an end to the arms trade. After taking action in South Korea alongside activists from around the world, blocking armoured vehicles with hundreds of people for the sixth day running in London, and seeing the way we continue to inspire each others’ struggles, it feels like we can win.

Sarah Reader is the training and events coordinator at CAAT.

You can find out more about what happened at ADEX on Twitter by searching for #StopADEX.