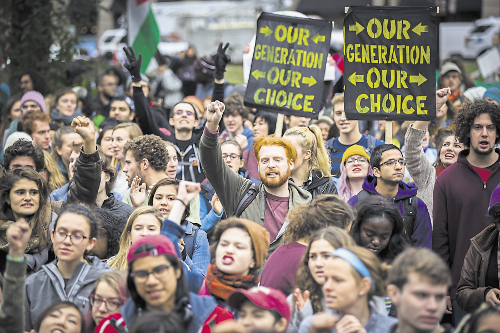 We can only win climate justice by breaking the rules

Like global climate change group 350.org, we all need to look beyond the Paris climate talks and whatever protests we manage to organise there to the building of mass civil disobedience for climate justice in 2016. 350.org is talking about an escalation in May 2016.

Whatever comes out of the COP21 negotiations in December, we will need huge amounts of pressure, from much larger and more powerful climate justice movements, to force governments and companies to turn the global economy away from runaway climate change. If governments make strong commitments in Paris, they will need to be forced to live up to them. If the promises are weak, as seems likely, we need to be strong enough to force governments and companies to take bolder steps for climate stability.

A key part of being a stronger movement is going to be more and bolder nonviolent direct action.

That is why Peace News has become part of the 350.org training network for preparing people to take part in civil disobedience, and has run workshops in Brighton and London.

Keystone and the Arctic

On 6 November, the climate justice movement celebrated an unlikely victory when US president Barack Obama turned down the Keystone XL pipeline that would have added a huge pipeline from the Alberta oil sands in Canada to Nebraska in the US.

One key part of that victory was nonviolent civil disobedience, with 1,253 people being arrested just in August 2011. There was an extraordinary coalition of indigenous First Nations in Canada and the US, mainstream environmental groups, ranchers and farmers and other local people along the pipeline route. People from all these groups took part in civil disobedience in Washington DC, learning from civil rights and LGBT direct actionists, as Ben Adler recounts on the Grist website.

The coalition that helped stopped Shell drilling for oil in the Arctic was similarly broad, and similarly bold in its use of direct action, inspiring millions to take action around the world.

Shell’s decision, announced at the end of September, wrote off £4.6bn spent hunting for oil in the Arctic, and wrote off billions on future earnings. While the company said in public that the decision was based only on economics, ‘Privately, senior executives concede[d to the Financial Times] that the protests had a bigger impact than expected, and damaged the company’s reputation.’

We need more big, bold nonviolent civil disobedience if we’re going to have any chance of climate justice.