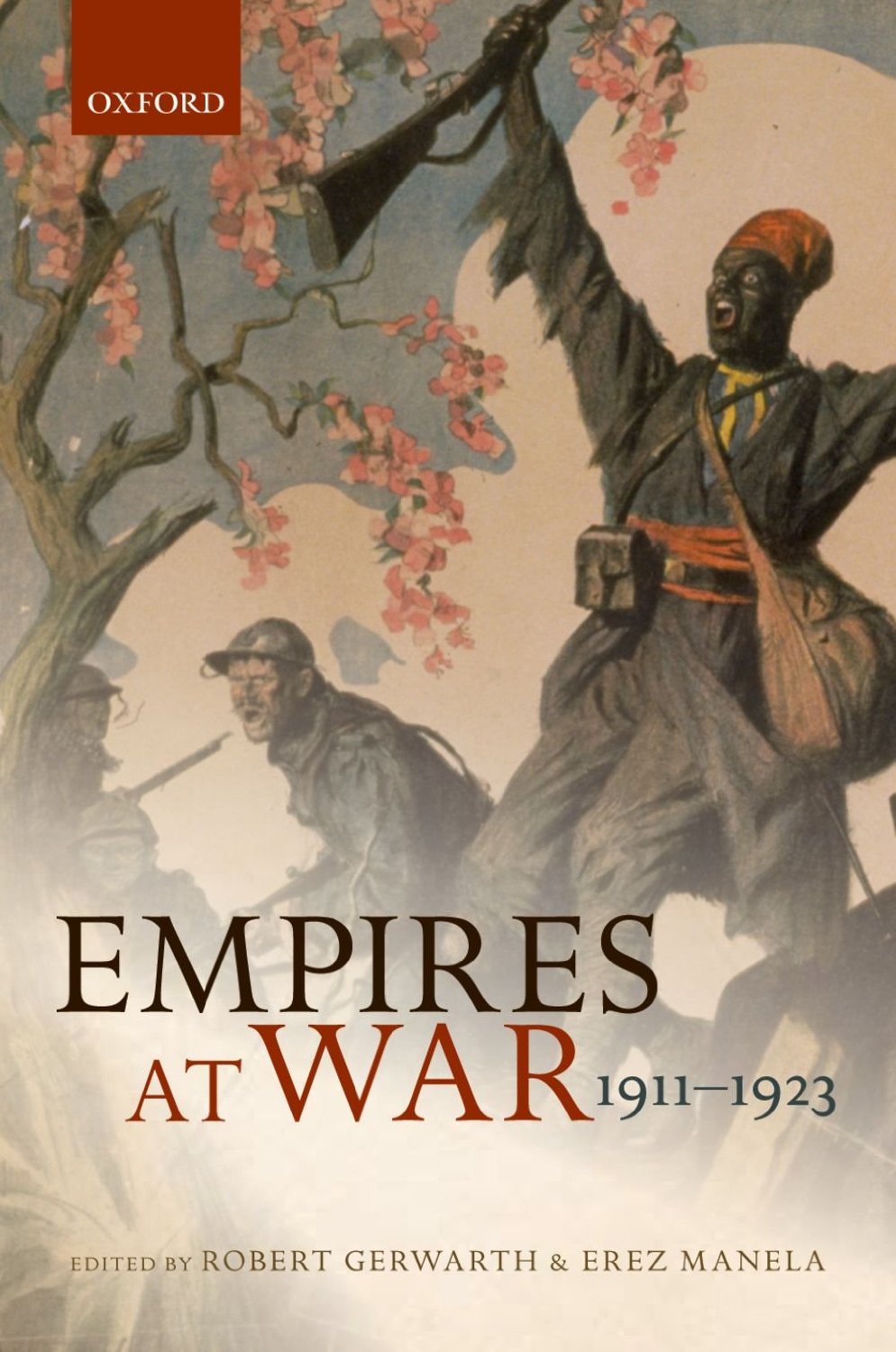 The First World War centenary has been accompanied by a tidal wave of books. Here we survey seven titles that might interest PN readers.

Gerwarth and Manela’s collection of essays aims to challenge two ruling assumptions of Western historiography: ‘that the war began with the sounding of the “guns of August” in 1914 and ended with the Armistice of 11 November 1918’, and that it ‘was primarily one of nation states and... a largely European affair’.

Instead, they argue, the war is best viewed as ‘primarily ... a war of multi-ethnic, global empires’, beginning in 1911 with Italy’s murderous invasion of Libya and not subsiding until the 1923 signing of the Treaty of Lausanne.

As such ‘the mobilisation of millions of imperial subjects on both sides of the conflict proved essential for all combatant states’. Unsurprisingly, there was resistance – violent and nonviolent – in many of the imperial domains, and the scattered references to this are of especial interest.

Heather Jones’ essay in this collection also helps to explode Max Hastings’ recent use of Germany’s pre-war genocide against the Herero people to justify Britain’s participation in the war. In reality, she notes, Britain ‘often chose, pre-1914, to collaborate with Germany’s imperial ambitions’, including in German South West Africa, where it ‘provid[ed] trade supplies via South Africa’ during the genocide.

Turning to the Home Front, Catriona Pennell draws on a wide variety of sources to support her conclusion that in 1914, ‘ordinary British and Irish people... did not back the war because they were deluded, brainwashed and naively duped into an idiotic bloodbath’. Rather, ‘their support was very often carefully considered, well-informed, reasoned, and only made once all other options were exhausted.’

If correct, this assessment – which directly contradicts the views of prominent anti-war figures of the time – is obviously disturbing.

Viewed from a more radical perspective than Pennell’s, it suggests that much of the vital spadework needed to create public support had already taken place long before July 1914 – a conclusion that perhaps holds some important lessons for contemporary peace campaigners.

The trials and tribulations of Britain’s 20,000+ First World War conscientious objectors (COs) is the one facet of anti-war activism likely to get a look-in in mainstream accounts of the war. Ann Kramer’s brief but highly-readable book provides a useful overview, giving ample space to the voices of the COs themselves.

Support for COs was co-ordinated through the No-Conscription Fellowship (NCF).

First published in 1980, Jo Vellacott’s book is a fascinating ‘elite history’ of the NCF – and the many problems, practical and ideological, that it wrestled with – refracted through the prism of Bertrand Russell’s involvement.

The wittiest – and one of the cleverest – of all of the war’s opponents, Russell started working with the NCF in April 1916, one month after conscription came into force, beginning a maelstrom of activity that would occupy him for much of the next 16 months.

In addition to huge volumes of administrative work – work which it seems difficult to imagine any figure of comparable stature or celebrity deigning to engage in today – he helped save the lives of 35 COs shipped to France and sentenced to death. Russell was also dismissed from his university post, banned from a third of the country and imprisoned for six months for his anti-war work.

Cyril Pearce’s moving and inspiring book (a revised reprint of the 2001 edition) tells the COs’ story from a very different perspective: the ‘hotbed of pacifism’ that was war-time Huddersfield.

Far from being ‘an earnest and persecuted minority’ (as COs have often been portrayed), the Huddersfield resisters found themselves ‘nourished emotionally, physically and ideologically by an extensive and supportive movement’, rooted in ‘the overwhelming commitment of the town’s labour and socialist movement to opposing the war’, which saw their actions as an ‘expression of a collective as much as an individual commitment’.

The communal nature of this resistance is vividly illustrated in one of book’s most dramatic incidents: Arthur Gardiner’s March 1916 military tribunal hearing, which was attended by over 300 supporters.

A prominent local Marxist, Gardiner’s entry was cheered to such an extent that the mayor threatened to clear the court. Put on the back foot by the massive show of support, the tribunal granted Gardiner a two-month exemption, a turning-point in its policy towards ‘political’ COs.

In a postscript, Pearce writes that research conducted since 2001 has established that the experience of Huddersfield ‘was replicated in part or in its entirety in many cities, towns and villages across Britain’.

One looks forward to his forthcoming book on the topic.

Although Britain had thousands of COs, it could be argued that Germany’s anti-war movement was ultimately both more militant and more effective, generating a series of increasingly large political strikes from mid-1916 onwards (something that never materialised in Britain), culminating in the German revolution of November 1918.

Though Rosa Luxemburg and Karl Liebknecht are most closely associated with these events in the public mind, the organisational clout behind them was provided by the Revolutionary Shop Stewards, a network of trade unionists operating covertly from within the German Metal Workers union.

Their leader, Richard Müller, was ‘one of the few leaders of the working class movement [in Germany] who was himself a worker, hailing from obscurity and poverty’.

If anything, Müller’s contribution is even less well known than the Revolutionary Shop Stewards’, so the recent English-language translation of Ralf Hoffrogge’s excellent study, which dovetails the history of man and movement, is especially welcome.

Immediately after the German monarchy was overthrown, Müller played a leading role in the losing battle to use the thousands of workers’ and soldiers’ councils that had sprung up around the country to break the power of the military and radically transform Germany society.

As Steward Ernst Däumig (a former colonial soldier, turned socialist revolutionary) argued, in a speech reproduced in Gabriel Kuhn’s valuable ‘documentary history’: ‘[I]f the workers... are kept dormant and separated from economic affairs, then socialisation can either never be realised or it will only turn into state capitalism, into monopolisation against the will of the workers’.

Having failed to lay the political groundwork for the council system, the movement was successfully repressed by an unholy alliance between the Social Democrats (who had backed the war) and the most reactionary sections of the old order.

Ultimately, the revolutionaries’ hopes were crushed by massive violence – their fetishisation of armed struggle also contributed to their failure.

There are too many valuable lessons to be learned from the German Revolution for it to remain the exclusive preserve of Marxist-Leninists. With any luck, Hoffrogge’s and Kuhn’s books – both strongly recommended – will help redress this.

Catriona Pennell, A Kingdom United: popular responses to the outbreak of the First World War in Britain and Ireland (Oxford University Press, 2014; 326pp; £24.99)

Cyril Pearce, Comrades in Conscience: The story of an English community’s opposition to the Great War (Francis Boutle, 2014; 303pp; £15)

Gabriel Carlyle is the PN reviews editor and researcher for ‘The World is My Country: a visual celebration of the people and movements that opposed the First World War’: www.theworldismycountry.info