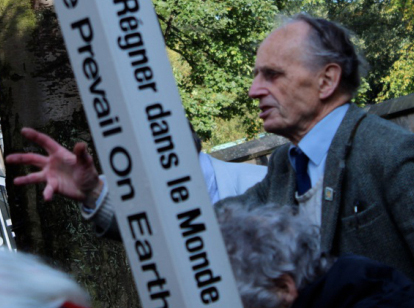 Geoffrey Carnall began reading Peace News as a teenager in 1939. When mainstream distributors refused to handle PN during the Second World War, he cycled round Cambridge delivering bundles of the paper. He was still delivering PN to the Edinburgh Peace and Justice Centre until a few weeks before his death. He served on the PN board during Hugh Brock’s editorship, and his numerous letters and articles have added historical perspective and considered political analysis to the debates in these pages.

Geoffrey gained a scholarship to Magdalen College, Oxford, to study English Literature in 1945. There he was active in politics and peace activism, and founded a branch of the Socialist Christian Group. His tutor CS Lewis reportedly commented: ‘Carnall is first-rate scholar. We call him “Knowledge”.’

He had registered as a conscientious objector in 1944, and after his studies served in the Friends Service Unit in India from 1948–50. In Calcutta, he met, and worked with, Horace Alexander, a British Quaker who had been a close associate of Gandhi. At the time of the civil upheaval brought by partition, and with India and Pakistan on the brink of war, he was greatly impressed by Alexander’s practice of nonviolence and mediation. It was at this time that he turned from Anglicanism to Quakerism.

Returning from India, he continued his studies at Oxford, and then obtained lecturer posts at Queen’s University, Belfast, and, in 1960, at Edinburgh University. Although he was proud of organising an influential teach-in on weapons of mass destruction in 1968 – the US use of chemical warfare in Vietnam was surfacing at the time – he was perhaps prouder of the court case he won the following year. Police had tried to use a bylaw prohibiting the distribution of commercial flyers to stop the distribution of anti-war leaflets to audiences leaving the Edinburgh Military Tattoo. Backed by the Scottish Council for Civil Liberties, Geoffrey had no difficulty in convincing the magistrate that the leaflets were political, and therefore exempt from the bylaw.

Although alarming to his staider colleagues, the episode did his career no harm, and he was subsequently elevated to the University Senate, and awarded a readership (given to recognise a specific research achievement with a high international profile).

Geoffrey was a key figure in the Edinburgh Peace and Justice Centre. I first met him when I was working as a volunteer there in the early 1980s. Many of us gained from his wisdom, his knowledge of history and politics, and the sense of perspective he had gained from working for peace for so many years. This was deeply grounded in the theory of nonviolence (he was always the academic) but never divorced from practice.

The Centre remained a key part of his work for the rest of his life – he served as secretary for over 30 years. He particularly valued it as a physical place that people could come across, and he relished those occasions when he could talk to people who dropped in – particularly when their views differed from his!

Renowned for his breadmaking, whose various pauses fitted well with his academic marking, and whose practicality surely recalls Gandhian spiritual practice, Geoffrey is survived by his wife Elisabeth, whom he first met at Edinburgh Friends Meeting in 1960, three children – Douglas, Jane and Rosemary – and two grandchildren: Stanley and Martin.

Geoffrey’s book, Gandhi’s Interpreter: a life of Horace Alexander is published by Edinburgh University Press. There will be a memorial meeting at the Friends’ Meeting House, 7 Victoria Terrace, Edinburgh, on Saturday 25 April, to enable family, friends, and colleagues to commemorate his passing. All are cordially invited. RSVP to his daughter Rosemary: rosiecarnall@yahoo.co.uk. The family plan to publish a booklet in Geoffrey’s honour (to be available at the memorial meeting) with a selection of his writings, a bibliography, and others’ memories of him. Please email contributions, including photos, by Friday 10 April to Douglas Carnall: dougie.carnall@gmail.com