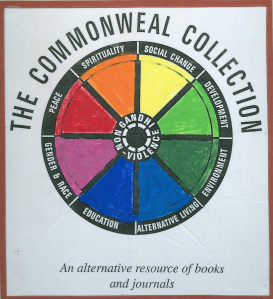 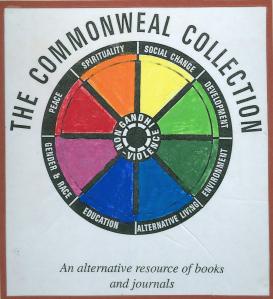 Commonweal is a free library which specialises in works on peace and radical politics. Its aim since inception has been to provide a service for activists and academics alike. It has been housed since 1976 within the main JB Priestley Library at Bradford University, West Yorkshire. It has had strong links from its early days with Peace News.

The library had its origins in the private collection of books, journals and pamphlets of David Hoggett, whose life in many ways encapsulates the ideals and values that underpin the collection.

Conscripted in 1947, he became a radical pacifist after reading Richard Gregg’s classic study, The Power of Nonviolence, and refused to serve any longer in the military. After a spell in Wormwood Scrubs prison, he was given alternative service working in forestry.

He subsequently worked with the International Voluntary Service for Peace (IVSP), helping at workcamps in post-war Europe, and in India where he spent three years and was influenced by the Boodhan (land gift) movement of Gandhi’s disciple, Vinoba Bhave.

In 1956, while building homes for refugees in Austria, David was critically injured in a fall from a rooftop and was largely paralysed from the chest down. But he learned to use a specially-adapted typewriter and was active in both CND and the radical direct action wing of the disarmament movement, the Direct Action Committee Against Nuclear War (DAC) and the Committee of 100.

As well as involvement in these campaigns, he turned his growing collection of books on nonviolence into a postal lending library. He chose the name Commonweal for this library as being the nearest English language equivalent to the Gandhian concept of Sarovodaya – ‘service to all’ – and set up a trust whose first members were his cousin April Carter (whose writings will be known to many Peace News readers), Hugh Brock (former editor of Peace News), Devi Prasad (former general secretary of War Resisters International), and another prominent WRI activist, Donald Groom.

Following David’s death in 1975, the library moved to its present home at the University of Bradford where the School of Peace Studies had recently been established.

Although it proved impossible after the move to continue with the postal loans service, the library’s resources are accessible through the inter-libraries loan service at all public libraries in this country.

It is also free for anyone to join the library. True, this is chiefly of benefit to those with easy access to Bradford, but anyone visiting the city could join and browse through its collection of over 11,000 books, and its considerable collection of pamphlets and journals.

Among its holdings are the Collected Works of MK Gandhi, many studies of Gandhi’s life and work, works by nonviolent activists and acknowledged specialists in the field of nonviolence such as Gene Sharp, and the complete bound volumes of Peace News.

In addition there is an extensive archive section, now located in the special collections section of the university library run by Alison Cullingford.

The archive includes much material from campaigns and movements, notably the Hugh Brock archive and the Direct Action Committee archive from the 1950s and 1960s, but also from more recent campaigns including the Free Vanunu campaign, and the McLibel campaign.

Among the artefacts it holds are the three original sketches by Gerald Holtom of the nuclear disarmament symbol, and his vision of how the Aldermaston march would look with the symbol displayed on streamers and banners.

The symbol was adopted by the DAC prior to the first Aldermaston march at Easter 1958 and subsequently by CND, Greenpeace and other campaigns. I recall the occasion when Gerald brought the sketches to the DAC office above Peace News, where Hugh Brock, Pat Arrowsmith and I viewed them and agreed there and then to adopt the symbol.

After Hugh’s death in 1985, his widow Eileen donated the sketches to Commonweal and although they are now too fragile to be on public display, a digitised copy of them is on show in Commonweal. Also on display is a section of the Greenham Common fence dismantled by women protesters in the 1980s.

Commonweal has donated other peace artefacts to the Bradford Peace Museum which was established in the city in 1994 with a five-year grant from the Joseph Rowntree Charitable Foundation. Commonweal collaborates closely with the museum which is in many respects a sister organisation.

Commonweal is involved in other outreach programmes. It collaborated with the Bradford Centre for Nonviolence – later renamed Treehouse – which opened in 2006 in Desmond Tutu House, immediately opposite the university, and incorporated the Fair Trade Café which had opened some 10 years earlier.

Treehouse provided space for meetings and discussions, including the planning of demonstrations and Occupy actions, and Commonweal assisted by supplying books related to nonviolent activism on a long-term loan basis.

Sadly, Treehouse and its café closed down a couple of years ago but during the period of its existence provided an invaluable service.

The library visits schools and community centres, especially in the more deprived areas of the city, and engages storytellers to entertain young people in the schools and Bradford central library. The children’s library was housed at Treehouse until it closed down, but then moved to the Peace Museum.

Other outreach events have included hosting the launch in 2006 of the first edition of the bibliography of nonviolent action, People Power and Protest compiled by April Carter, Howard Clark and myself, and the launch of the four-volume Oxford International Encyclopedia of Peace in 2011.

In 2012, Paul Rogers gave the first annual Commonweal lecture with a masterly survey of the prospects for radical change in the coming decades. The following year, Sharyn Lock spoke about breaking Israel’s illegal blockade of the Gaza Strip in August 2008, in the boats of the Free Gaza movement. In 2014, I was the speaker and entitled my talk ‘Civil Resistance – the Rise and Rise of Nonviolent Action’.

This year’s lecture was given on 17 February by Ernest Rodker, who has been the main co-ordinator of the Free Vanunu campaign, and has been involved in a variety of nonviolent action campaigns since the late 1950s.

During most of the period between 1976, when the move to Bradford occurred, and 2004, Commonweal was in a position to employ a part-time co-ordinator, mainly thanks to grants and legacies.

Since then, however, the trustees have had to take on a more hands-on role. In addition to the regular quarterly trustees’ meeting, they and volunteers have taken part in regular workdays to weed out unwanted stock, classify and shelve new book donations, and other tasks.

Much extra work has been generated in the last few years as a result of a refurbishment programme at the university, which has meant that Commonweal has had to move all its stock, not once but twice.

Funding remains a serious issue. Commonweal has never had a sizable acquisition fund and has had to rely mainly on the generosity of authors and publishers to keep up to date with new works. Most of the funding now comes from twice-yearly booksales – again handled by trustees and volunteers, and by a ‘Friends of Commonweal’ scheme.

Trustees are seeking 50 or 100 people to make a small contribution of between say £2 and £5 a month.

Whether or not people are in a position to make a modest contribution, our hope is that more people will make use of the library, whether by joining it if this is practicable, or accessing its books through the inter-libraries loan system. It is providing such support to the movement that was the chief aim of its founder, David Hoggett, and the trustees and helpers who have kept the library going.

The online catalogue for Commonweal can be found at: http://catalogue.brad.ac.uk/search~S10